Jim Koch is more than a little excited to talk about his latest project: the 14,000-square-foot Samuel Adams Boston Tap Room scheduled to open on Jan. 30.

“I’ve waited over 10 years to have this conversation,” the Boston Beer Co. founder recently told Boston.com over the phone.

Who could blame him? The taproom, a three-level structure that replaced Hillstone restaurant, sits directly across from Faneuil Hall’s Sam Adams statue, a place where Koch said he used to wander by at night and would feel “like Sam’s spirit was somewhere.” Call it kismet. 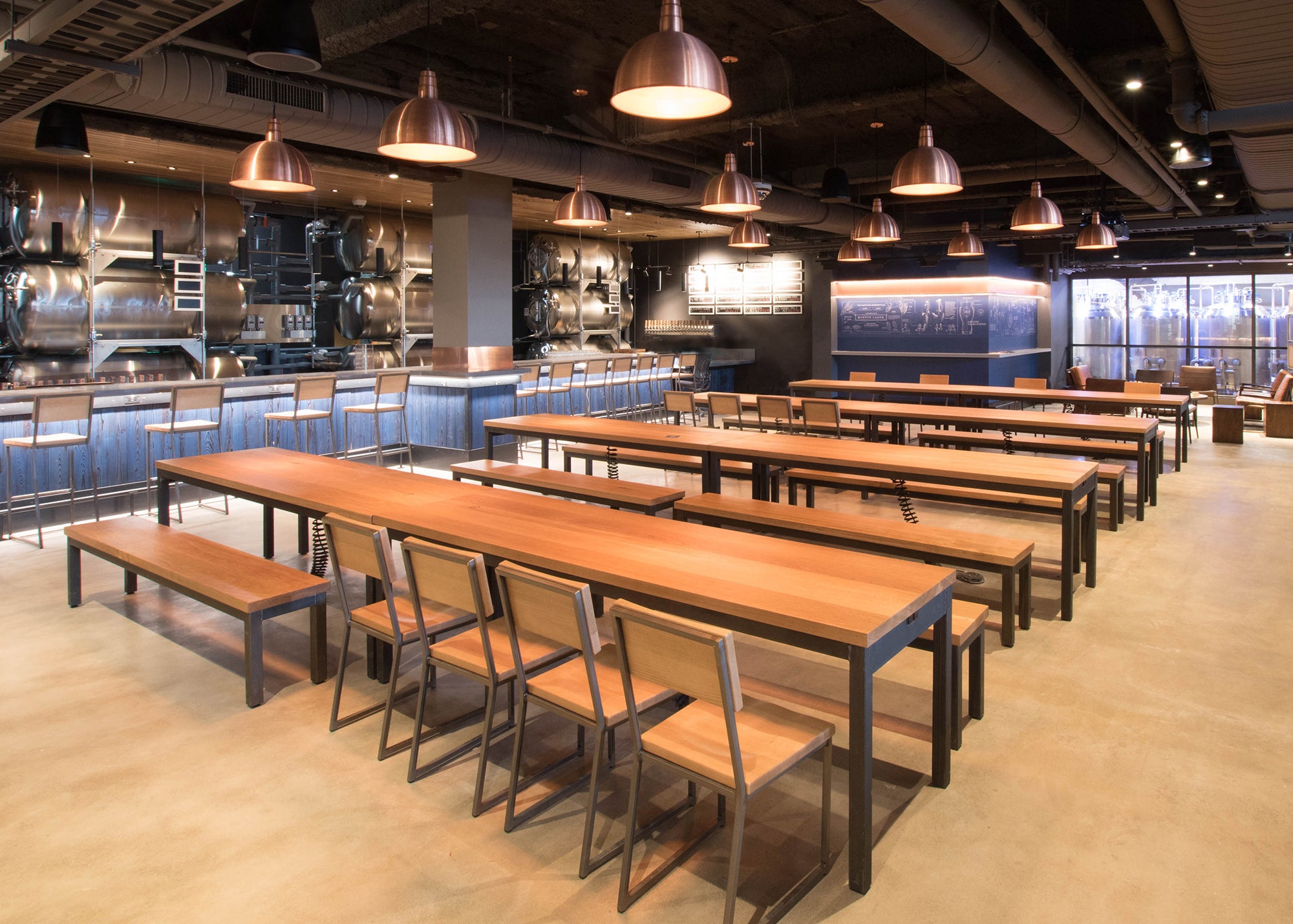 The Faneuil Hall location is not the company’s first taproom, but when it opens, it will be the most central to Boston. Boston Beer Co. opened a Samuel Adams research and development brewery in Jamaica Plain in 1988, and added a taproom to the location in 2017. A Cincinnati, Ohio, taproom opened in 2018.

“Unless you live in that part of Jamaica Plain or you’re coming to the brewery, there’s no other reason for people to be there,” Koch said. “There’s no foot traffic or anything like that. It’s not a place that people go just to wander around.”

For the past decade, Koch has been searching for the perfect Boston location, considering options in the Back Bay like the Castle at Park Plaza or what’s now Restoration Hardware. But when the former Hillstone space became available after closing in October 2016, he jumped on it.

“I decided I was going to spend three hours there [and] see who goes by,” Koch recalled. “And the people who were passing by were, to my eyes, Sam Adams drinkers. The landlord said, ‘We have 13 million people who walk by this site …’ and I said, ‘That’s great — my job is to get a million of them to not walk by and stop in for a beer.'” 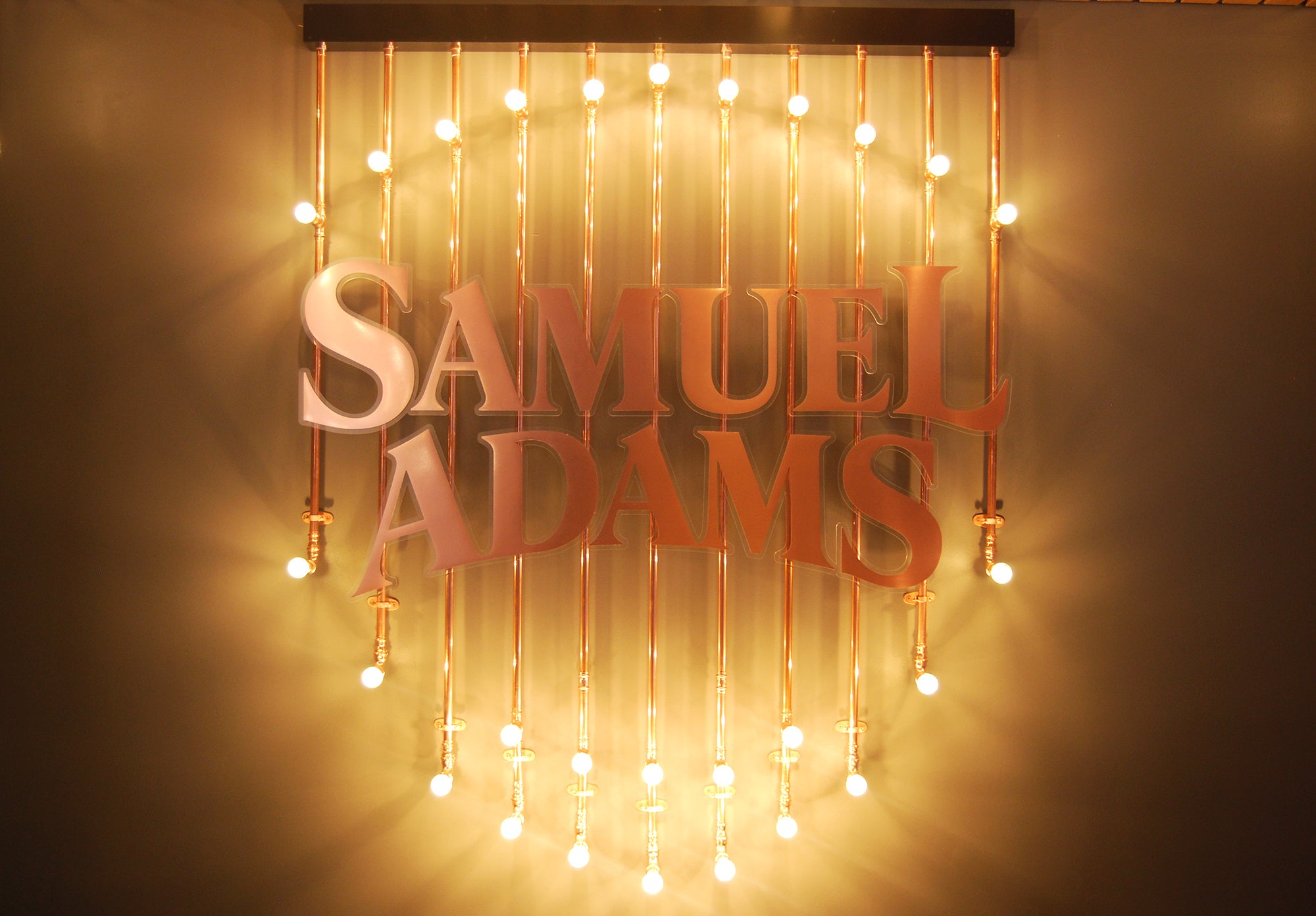 A sign at the new Samuel Adams Boston Tap Room.

The new taproom features 20 beers on tap: Eight familiar staples like Boston Lager, Boston Brick Red, and Sam ’76, and a dozen that are unique to the Faneuil Hall spot — this location, like the one in Jamaica Plain, is a research and development brewery.

Megan Parisi, who has worked with Samuel Adams for nearly five years, is the head brewer here. She has developed an opening lineup that includes inventive brews like the Green Tea Pale Ale, Lemon Drop Lager, and Oaked Vanilla Porter. A Moscow Mule-inspired beer made the initial list, a mimosa-inspired option is coming up soon, and Parisi said that an orange chocolate biscotti beer will become available in a few weeks.

“Research is great, but to actually be able to see the beers go into the hands of people across the bar — you get that immediate feedback,” Parisi said. “Do people like it? Are they enjoying it? And if they’re not, OK, maybe it didn’t work, but we have that direct connection with the drinker.” In order to help shape the R&D process, a designated “innovation brew table” is located on the ground level, which guests can reserve to sample some of the site-specific beers. One of the brewers will walk participants through a tasting, and a survey will help to determine how these beers will continue to be shaped.

Beyond that, Koch said he hopes that people take advantage of the restaurants in the area. 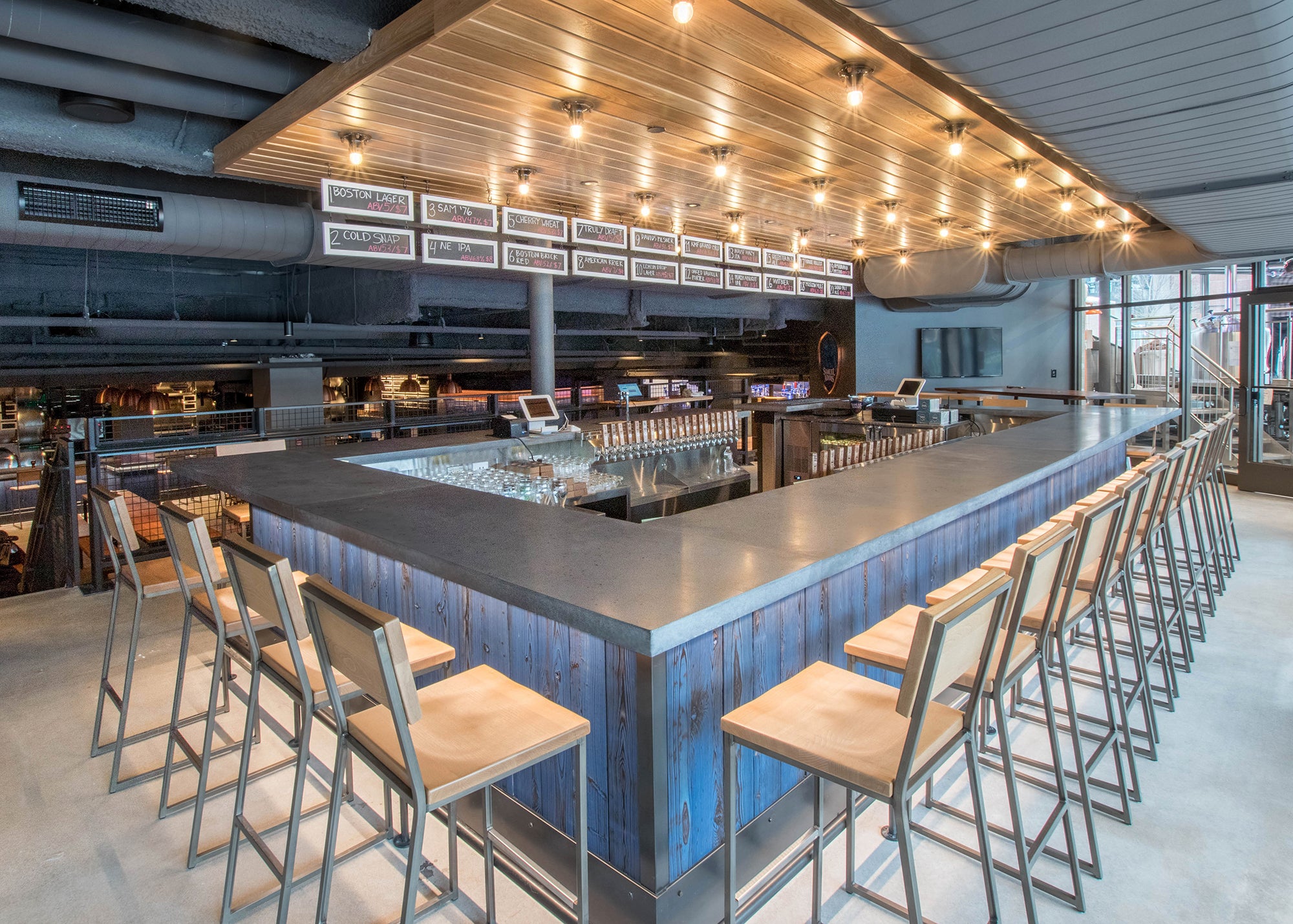 Those who frequented Hillstone will find the space radically changed, with three levels now offering distinct environments to kick back with a beer. On the lower level, a row of communal tables — each equipped with wireless chargers — is flanked by cushioned stadium seating on one side and a lengthy bar with a crowler station on the other. Along a separate wall sits a small merchandise shop, where guests can purchase T-shirts or four packs to go; toward the brewhouse, a projection screen will descend from the ceiling on game days. Guests looking for a more private experience can reserve the 1984 room, a sequestered space on the lower level with room for roughly 18 people and a draft system that serves the eight staples on tap.

On the ground floor level, a 360-bar faces glass windows that will open up in the warmer months. A soft seating area fills one corner, while a nearby stairwell and elevator lead to the top level, which boasts yet another bar and a seasonal outdoor patio. 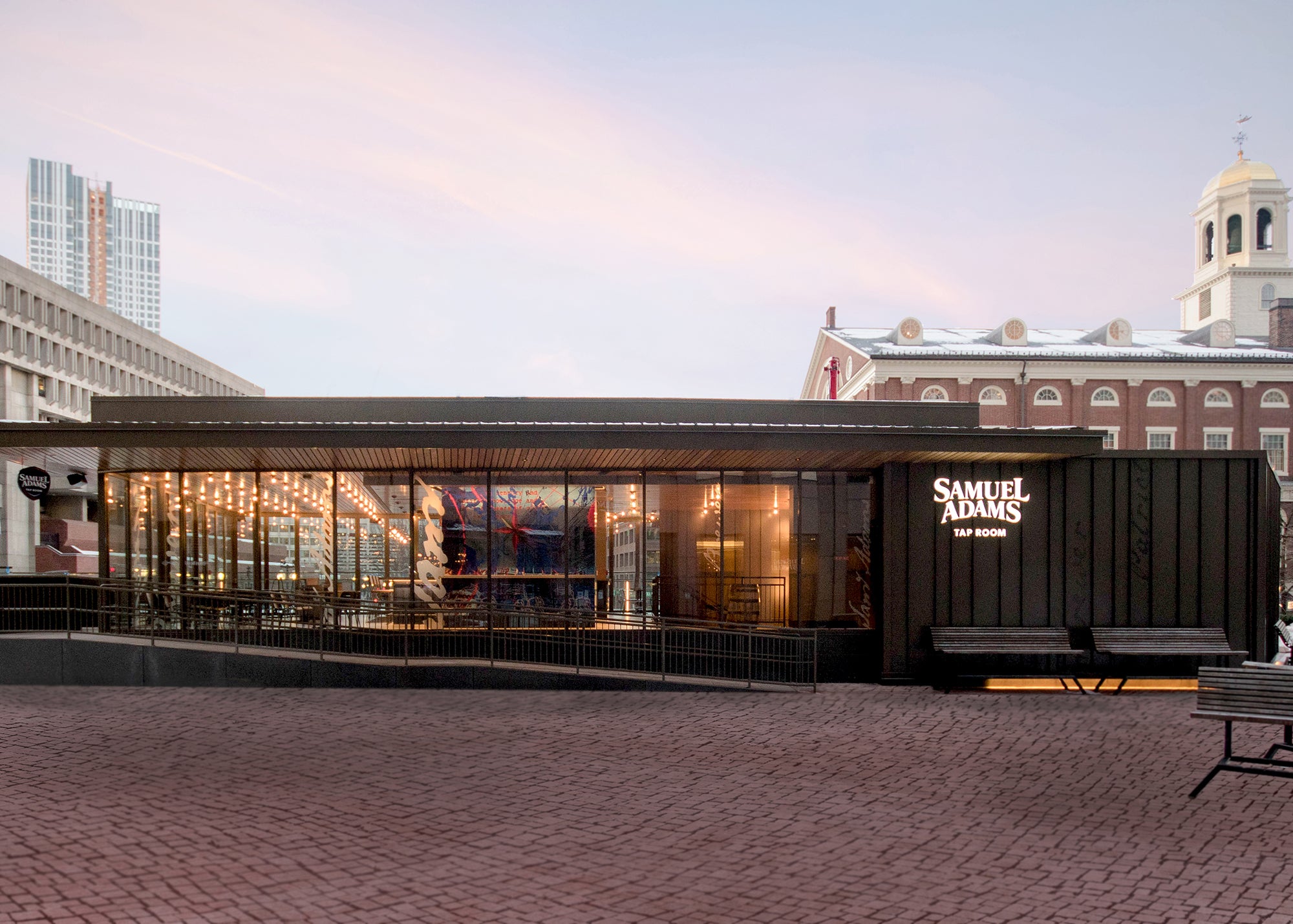 It’s a substantial glow-up from the Jamaica Plain taproom, and, with a capacity of around 400 people, one seemingly equipped to handle the volume of people filtering through this area. It’s also the start of a potential changing of the guard at Faneuil Hall, where old standbys like Durgin-Park are giving way to more contemporary concepts.

“Faneuil Hall is a world-famous place, and we want to keep that energy going,” Koch said. “This is a great time to give a jolt of energy, a breath of fresh air to Faneuil Hall. The ball will keep rolling. We hope to be part of that new energy coming into this neighborhood.” 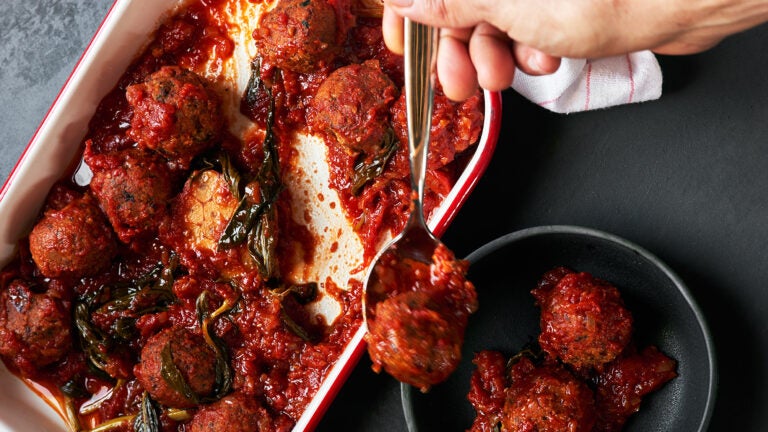