The coronavirus pandemic has impacted nearly every facet of our lives, but its effects have hit two industries particularly hard: healthcare and restaurants. Now, a grassroots organization founded in Boston is trying to provide relief to both spheres — and it’s already making an impact beyond Massachusetts.

Off Their Plate is the brainchild of Natalie Guo, a Harvard medical student with a background in business.

“I thought maybe there was a good way to help both of these front lines: the one in the restaurant community [suffering from] unemployment, and two, the front lines of COVID-19,” Guo said. “And how we share that together is we bring in chefs that are really motivated by supporting frontline COVID workers, and we bring back some workers who can prepare nutritious meals for these frontline workers at the hospital.”

On March 14, Guo reached out to chefs Tracy Chang (PAGU) and Ken Oringer (Coppa, Little Donkey, Toro), and the three started brainstorming. A fundraising page was set up, meal deliveries were coordinated, and Off Their Plate was officially born. 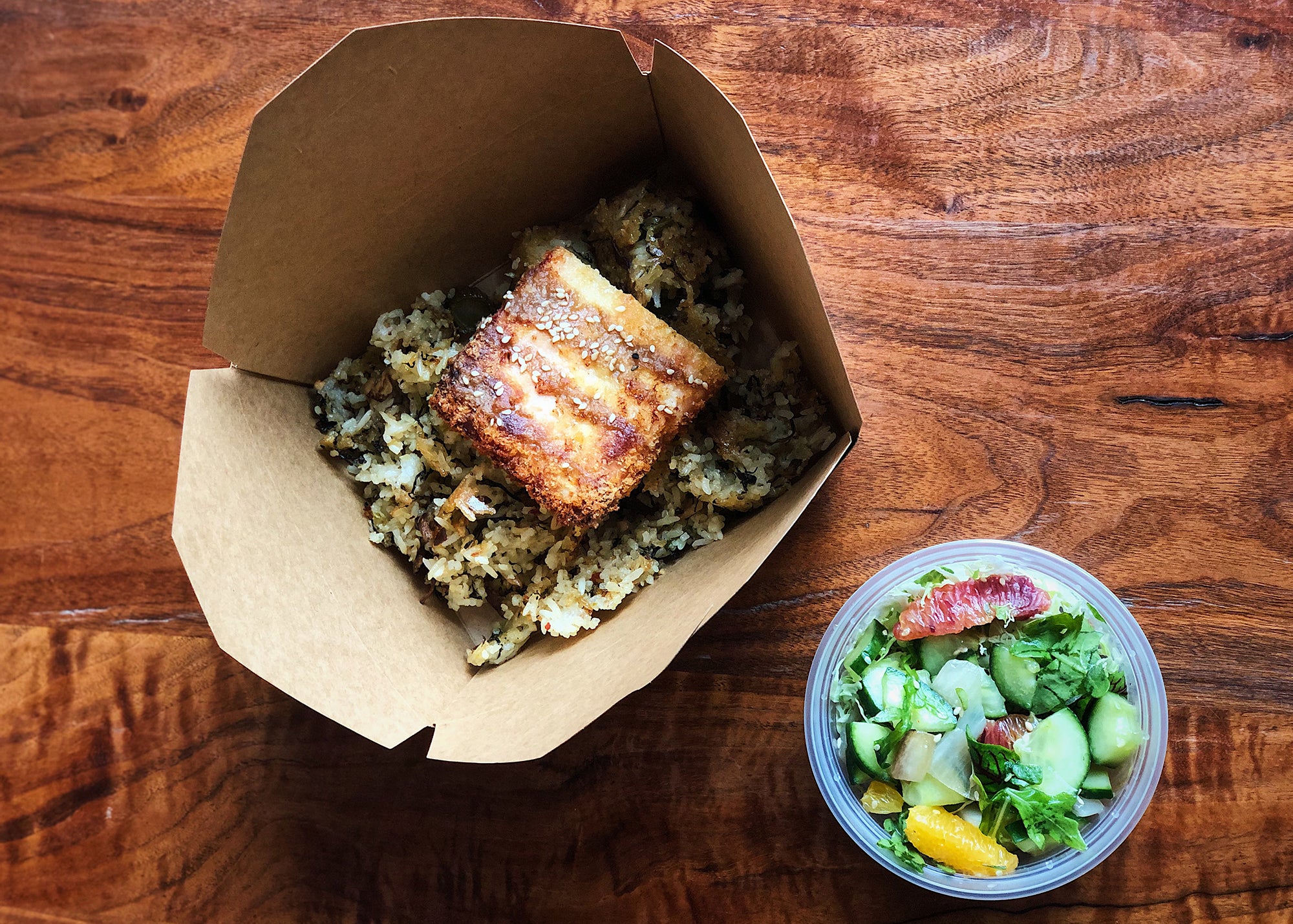 Chicken katsu fried rice with cucumber salad, one of Tracy Chang’s Off Their Plate meals.

Since the organization’s first test run on March 19, when 90 meals were delivered to Brigham & Women’s Hospital, Off Their Plate has provided “Hero Meals” for sanitation crews, nurses, residents, lab technicians, and other healthcare workers at Massachusetts General Hospital, Boston Medical Center, Beth Israel Deaconess Medical Center, Carney Hospital, and the West Roxbury VA Medical Center. The lunch and dinner meals are designed to be healthy and filling. Last week, Chang made and delivered paella and fried rice, while this week she’s planning more noodle-based dishes. Shellfish and nuts are omitted, and there is always some form of protein.

“My father is a pediatrician and he has a practice in Malden, so it’s very familiar to me seeing someone working tirelessly all day long,” Chang said. “He barely has time to drink water — and he’s like that when there’s no pandemic, so imagine how people are during COVID-19! It’s nice when there’s a meal delivery and people are excited to eat this versus a frozen box. And just hearing the thank yous and whatnot has been really rewarding.”

Cooking and delivering meals takes manpower, so the chefs involved have rehired a handful of their employees. Oringer, who has been cooking meals for Off Their Plate alongside his JK Food Group partner Jamie Bissonnette, said it has been incredible to have some of his employees back in the kitchen.

“There’s nothing worse than seeing your staff, who’s our family…to just see them worry about where their next meal is going to come from and how they’re going to be able to afford to deal with certain simple ways of living,” Oringer said. “It’s just so nice to see the smile on their face coming into work every day now. It’s almost like we’re saving their lives; meanwhile, we’re cooking for heroes that are saving other people’s lives. It’s just a really gratifying feeling.”

As of Monday morning, Off Their Plate has raised more than $158,000. In Boston, donations to the organization are evenly split between employee wages and meal costs, which average out to $10 per meal. (Guo says that in other cities, donations may be split differently.) Some donations are even coming from the very community Off Their Plate is working to serve. 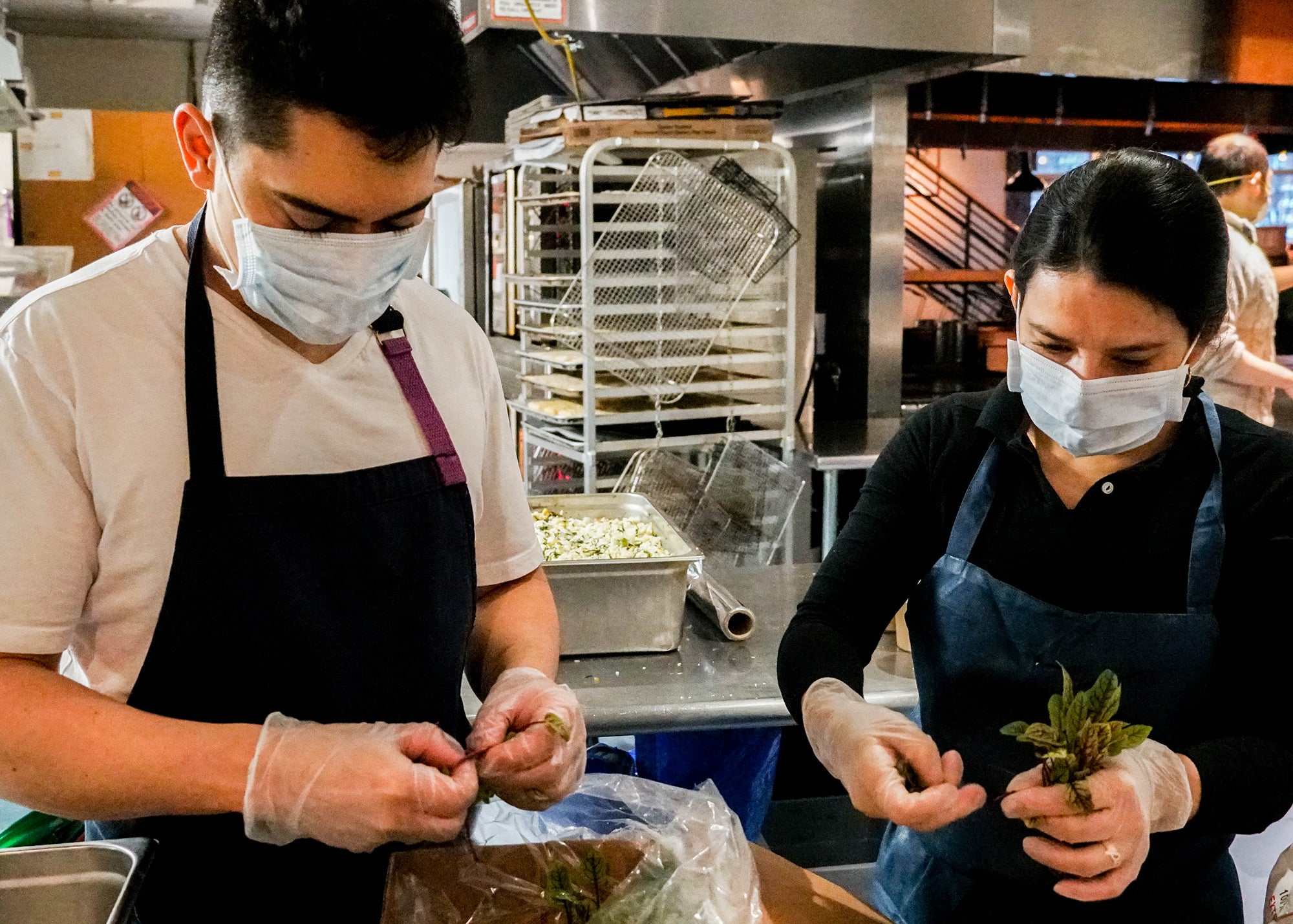 Off Their Plate meals being prepared before delivery.

“I started seeing lots of notes and donations from healthcare workers who had received a meal or were family members,” Guo said. “People who wrote ‘Oh, I’m the husband of [an Emergency Department] nurse at Beth Israel and I heard what you guys did, here’s a donation to help others.’ And that’s just really incredible, because it means that for every donation that comes to us, not only do we help a restaurant worker in need, we also create this little flywheel of donations where people who are able to can contribute to other healthcare workers who need it.”

Despite being in operation for less than two weeks, Off Their Plate has already expanded to New York City, Los Angeles, San Francisco, and Pittsburgh. As of Sunday night, the organization has cooked and delivered 1,580 meals across all participating cities, and has partnered with CommonWealth Kitchen and World Central Kitchen to raise awareness and serve as fiscal sponsors for the initiative, which was incorporated as a 501(c)(3) organization.

And they have bigger plans for serving the Boston area, too. While the focus is currently on Hero Meals, Off Their Plate plans to launch Hero Kits, which are grocery care packages for healthcare workers who are unable to make it to the grocery store. It also plans to expand its reach this week to Boston Healthcare for the Homeless and East Boston Neighborhood Health Center. Other local restaurants have been spreading the word about Off Their Plate — Shy Bird, for example, allows customers to add an Off Their Plate donation when they place an order — though Chang and Oringer said that they are being selective about volunteers and scaling the operation, as health and safety protocols are a major concern.

“We just have to make sure that we are vigilant in all our practices and setting up [standard operating procedures] that make sense, and that we can utilize in other cities,” Oringer said. “Safety is our first and foremost priority.”

Guo, who was doing her clinical rotation at Massachusetts General Hospital before she launched Off Their Plate, is amazed by the charitable actions of everyone involved.

“Our goal is to serve Boston as well as we can, which means getting to volunteer for the homeless and getting to areas where healthcare workers are really in need,” she said. “Not a single person has asked for a single dollar of service, and that’s just really incredible.”