These are pioneer times. With social distancing in full effect and, for many, schedules suddenly cleared, we’re becoming reacquainted with knitting, fermenting, and even our own kitchens.

The sudden need for self-sufficiency has become no more obvious than with bread baking, as evidenced by a dearth of flour at the grocery store and countless posts on Instagram and Twitter dedicated to perfectly golden loaves and adorably-named sourdough starters.

But what if you’ve never baked a loaf in your life?

We turned to Nicole Walsh, co-owner of Brookline’s Clear Flour Bread, for guidance on first-time bread baking. Walsh said the bakery, which she owns with her husband, Jon Goodman, will start offering online orders on April 6. Until then, follow her tips on baking your own bread — and, yes, naming your own sourdough starter.

This interview has been edited and condensed for length and clarity.

What equipment do you need to bake your own bread?

NW: Your hands are the most important thing. Bread has been a staple for tens of thousands of years, and we can make it with whatever we have, from the fanciest technology and mixers to hand mixing. I think using your hands is a better way to have someone get into baking, because they get to understand it.

NW: [laughs] Yes, you should name it. A sourdough starter is basically the cultivation of wild yeast and bacteria in flour and water, and those are the only two ingredients you need to create a sourdough starter. You don’t need yeast or salt or any of that. The sourdough starter usually takes about two weeks to build up a collection of the bacteria and wild yeast that will be the path to a successful loaf. In theory, you could let it go as long as you want, but you’re going to start to build not great bacteria at a certain point, so you really want to inoculate fresh flour and water with a little bit of your initial starter after about 48 hours. 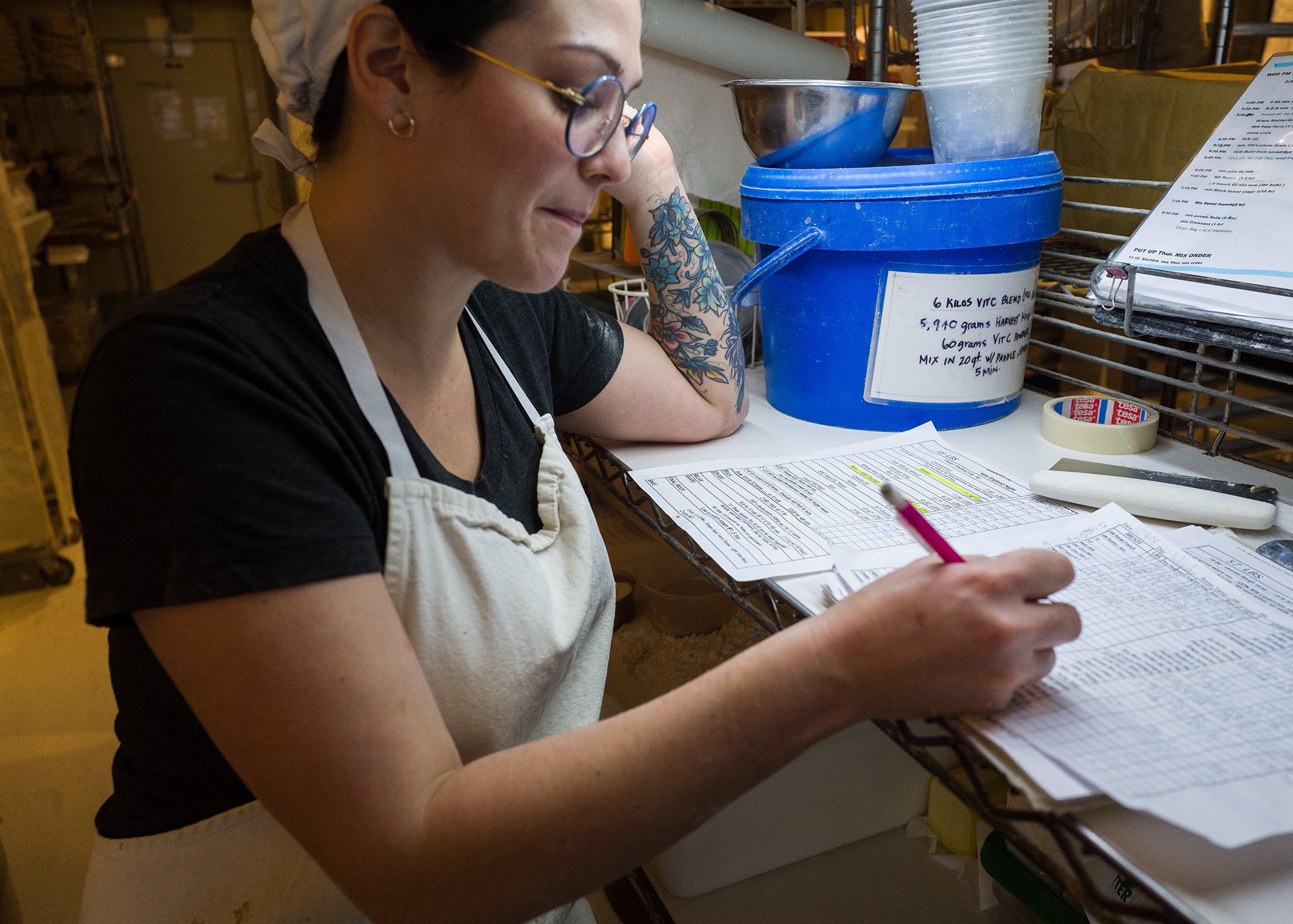 How do you know if the yeast you’re using is active?

NW: You could mix it with a little bit of water and flour and see if you have activity — within a couple of hours you should have some gas bubbles, because the yeast is alive. [If the yeast has gone bad], it could also smell quite sour, like beer. Yeast does have kind of a funky smell to it, but if it’s gone beyond that it can be pretty noticeable.

What exactly does it mean to knead dough?

NW: Usually kneading the dough or just mixing it is the process of creating a gluten structure. Kneading the dough is just to build strength in it so it will help trap the gas bubbles that are created from the fermentation. If you don’t have that strength, you’re going to have a flat loaf. Kneading something is using the palm of your hand and pressing into a tabletop and sort of collecting the dough back on itself for that incorporation of both air, like the natural wild yeast in the air, and creating that gluten development. 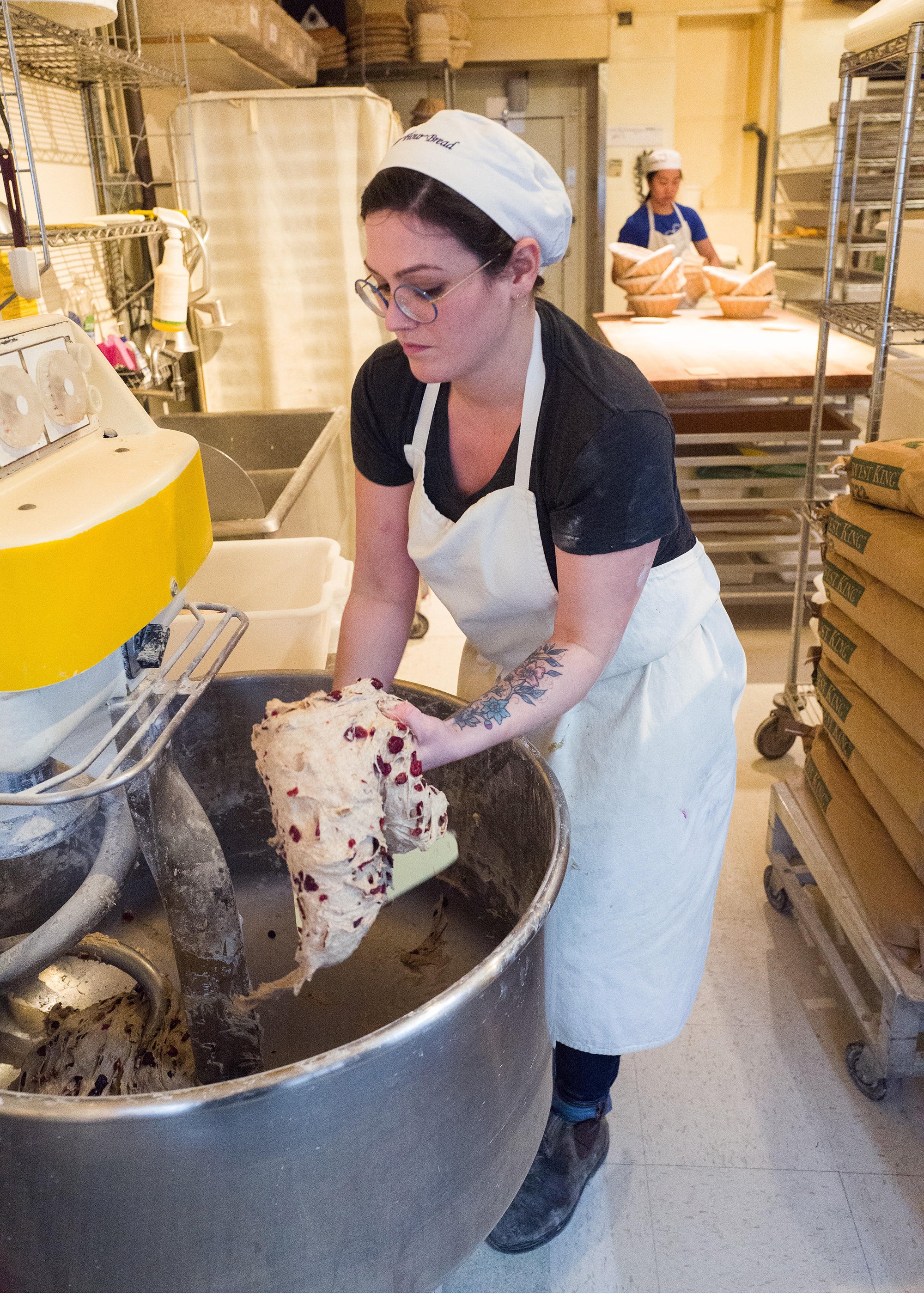 What are some easy types of bread a beginner can start with?

NW: There’s a lot of whole grain stuff going on right now in the world, which I think is amazing, but it’s a little more difficult to understand the strength and the structure of those types of bread, like the bran and whole grain and rye. So I would start with a white sourdough and then start to incorporate those whole grains little by little, until you’re comfortable with understanding how the dough should feel and what your final product ends up being.

How do you know when your bread has properly risen?

NW: When you get to the final proofing part, we at the bakery like to poke it with our fingers. If your loaf springs back, then it’s not fully proofed yet. Vice versa, if you do that and your finger goes in and it’s almost gassing the entire loaf, you’ve gone too far. Usually you’re looking for not a lot of spring back, not a complete collapse of your finger poke. We look for volume as well in the basket or pan [the loaf is in], so you’ll want to look at that as well, but that can be misleading; you might have put too much dough in the pan and so it’s gone way over where it should but it might still be underproofed. So it’s a lot of trial and error.

How do you know when your bread is done baking?

NW: There are a couple of techniques. There’s the common tapping on it — you can tap the bottom of the loaf and hear almost a hollowness to the loaf. Another way is just to stick your thermometer in it. You usually want it to be somewhere between 191 to 200 degrees [Fahrenheit] inside.

stuck at home and wanna try your hand at bread baking? we got you. In this 8 part series I hold your hand through each step. this is a new thing we’re trying here, so please let me know if you like and want me to do more! 💖

What are some resources for new bread bakers?

NW: Instagram is where everyone is these days. I have a buddy in San Francisco, Josey Baker at Josey Baker Bread. I think he has such a magical way of teaching people. I would look for either his book or follow him on his Instagram, where he’s been talking a lot about sourdough starters and baking bread at home. And then I would just pick up some books and try out some recipes. There are just so many techniques and methods out there — as long as you don’t give up, you’re going to succeed. There’s a book called “Sourdough” by Sarah Owens. She’s a fantastic baker, and I think her book is phenomenal.

Any other tips and tricks for beginners?

NW: Start somewhere and then don’t give up. Change one thing at a time — don’t change everything at once, because you don’t have a control at that point. If your bread is too wet, take some of the water out but keep everything else the same. Experiment with one recipe a couple of times. Experience is knowledge; at the end of the day, you just have to practice. 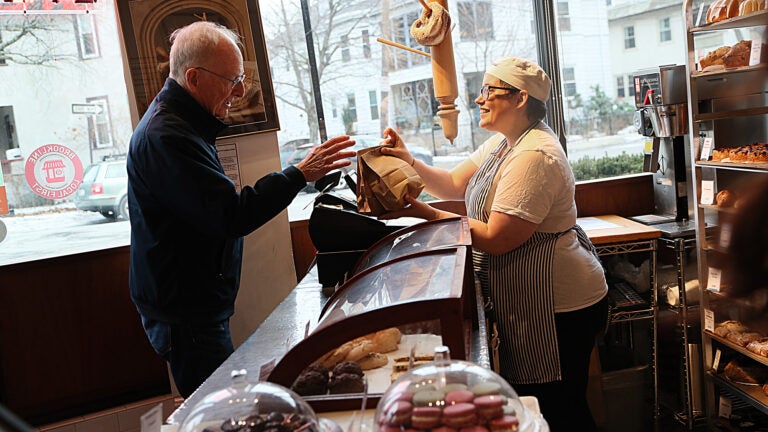