The usually lively dining rooms of restaurants across Massachusetts have been silent for weeks now. Take-out orders still ring in from loyal customers at some establishments, and wine and beer are offered to-go these days.

Local restaurants are doing what they can to stay afloat.

But of those still weathering through the heavy economic fallout of the COVID-19 pandemic, the looming question remains: What happens after all of this is over?

Depending on who you ask, expanding liquor licenses in Boston may be part of the answer.

The role the typically coveted licenses could play, as the city’s food and restaurant industry works to imagine some sense of what a bounce-back could look like, was front and center at a Boston City Council committee meeting earlier this week.

Both home rule petitions would pick up from where 2014 state legislation — that brought in 75 additional licenses — left off in an effort to spur restaurants and economic growth in neighborhoods outside the city center, focusing on communities where those amenities have been absent, officials say.

The two filings were submitted long before the full force of the coronavirus crisis hurtled the restaurant industry into uncertainty, when Gov. Charlie Baker last month mandated restaurants to close up in-house dining through at least May 4.

The restaurants suffered a loss of $583 million in sales, and 300,000 people lost jobs up through March 26, the most recent data available shows, according to Bob Luz, president and CEO of the Massachusetts Restaurant Association.

While officials say 25 percent of restaurants could go under while closed during the health crisis, Luz said the reality could be significantly higher, potentially as much as 40 percent.

“To think about putting 184 more licenses in the City of Boston right now? Come on,” Luz said. “We have to try to get 184 members through this.”

But officials and others believe the extra licenses could help the industry regrow, potentially allowing existing restaurants to expand their offerings or allowing new ones to open.

Councilor Lydia Edwards, the committee chair, said Boston’s recovery is going to require all the resources the city can supply.

“I don’t believe that we should be planning for an aftermath,” she said at the start of the hearing. “We should still be planning for resources that our restaurants have needed and still need.”

Baker, acknowledging the different circumstances now surrounding the industry, offered an amendment to his initial proposal, putting up 33 new nontransferable licenses — three in each of the targeted neighborhoods — for one time only.

“I don’t see the need in anybody’s neighborhood being more than one or two licenses in the next six months,” he said. “We’ll be fortunate if there’s three in the whole city. I think this coronavirus, the aftermath, is going to be far worse than what we’re going through right now in the economy.”

Luz said he’s not counting on businesses to be up and running again by May 4.

But even when they do, there will still be a long road ahead to get back to any normalcy.

He told councilors he envisions many restaurants will need to be reworked to satisfy health concerns.

Tables will be need to be spread out. Capacity won’t be what it was before, he said.

“There’s no easy, straightforward answer (about) who makes it and who doesn’t. It really depends on each situation,” Luz said. “But make no bones about it: the business model for any restaurant in the last four weeks changed dramatically.”

As far as liquor licenses are concerned, Luz doesn’t mind new licenses in historically underserved neighborhoods, he said. But if a new business launches with one of the extra licenses right next door to a restaurant working on its come back, the recovery process will be “far more difficult,” he said.

“I think it would be irresponsible for us to do that,” Luz said. “We have to have a total focus on saving what’s out there and coming up with plans that can assist these owner-operators.”

Some councilors wondered aloud how many licenses will become available after businesses that are unable to survive the closings shutter for good.

“I’m not for this proposal and I’m not against this proposal,” Councilor Ed Flynn said. “I think it’s a good start. There’s just so many unanswered questions.”

‘Liquor licenses could be a tool for people to recover’

Seventy five percent of small businesses lost 50 percent of their revenue in Boston during the first 20 days of the health crisis, according to John Barros, the city’s chief of economic development.

There’s no doubt the restaurant and accommodation industry has been the hardest hit by the pandemic repercussions, he said.

In fact, Barros regrets that city officials didn’t move faster to expand the number of liquor licenses before the crisis — there could have been more restaurants able to offer beverages for take out under Baker’s order if they did, he said.

Barros agrees at least 25 percent of the city’s restaurant scene could go under due to lost business.

“It really does look dire right now,” he said.

Among the businesses applying for support through the Small Business Relief Fund, a high number come from neighborhoods — especially low income areas — where the new licenses would be available, according to Barros.

Josh Weinstein, owner of The Quiet Few, a tavern in East Boston, told councilors he supports building out the city’s liquor licenses.

He pointed to the thousands of food industry employees now without jobs. Extra licenses could mean more businesses down the line, and therefore, more employers, Weinstein said.

“I think it is important that we focus on right now but also the future as well,” he said.

Edwards said during a council meeting Wednesday the two proposals will stay in committee for the time being, potentially making it into working sessions in May ahead of the July 31 filing deadline on Beacon Hill. 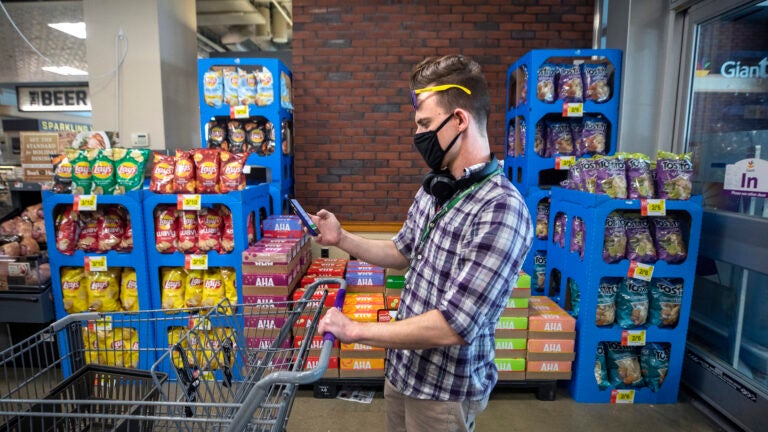 He's delivering your groceries to you. He's also risking his life.