On Jan. 6, Nathan Nickerson III, owner of Arnold’s Lobster & Clam Bar in Eastham, attended the pro-Trump rally in Washington, D.C. He marched to the Capitol as a violent mob sieged the government building, leaving five people dead, including a Capitol Police officer. He called into a conservative radio program to describe his experience.

And then he apologized.

In a now-deleted post published to the Eastham Community Space Facebook page on Jan. 6, Nickerson detailed his attendance and remorse for participating in what he thought was going to be “a peaceful protest.”

“I would like my friends in Eastham [to] know I was at the Trump rally in Washington D.C. today to support Donald Trump for President,” Nickerson wrote. “I am not particularly fond of him personally but I am extremely worried about the direction the country is heading in. I thought it was a peaceful protest until I learned that some idiots got into the Capitol Building and Lord knows what they did. I also just learned a woman was shot and killed there today. I was not aware of any of that. I detest in the strongest terms those vile actions and those found guilty should be punished to the fullest extent of the law.”

Nickerson said that he saw rioters “going beyond the marked out area” and that, once they were tear gassed, he was close enough to “get a whiff of it.”

“Had I known this was going to happen I would never ever have gone,” he wrote on Facebook. “My bad for this. I’m so terribly sorry for the vile events that went on today and only wish a very small number had used more decorum and restraint. This is not a time for violent protest if there ever is a good time. God only knows what will happen if we don’t start respecting other peoples’ opinions. We need to be civil and discuss our differences without anger and contempt. It’s time to have the courage to show more love and understanding for those you disagree with. If we don’t rise to this occasion I fear for the future of ourselves and our children.”

The restaurant owner signed the post with “my sincerest apologies.”

Nickerson did not respond to Boston.com’s request for comment Monday.

According to an admin of the Eastham Community Space page, Nickerson removed the post after about an hour and a half, but it was shared on other social media accounts. Some reposts have attached a photo of a man at the riot wearing a Trump hat and a “Civil War” sweatshirt to Nickerson’s post, but the admin told Boston.com that the man in the photo is not Nickerson.

On Wednesday, prior to posting the apology, Nickerson called in to “The Howie Carr Show” from D.C. He began by confirming to Carr that “oddly enough” he was tear-gassed that day.

“We were walking very close to what you call the front lines, and people were going over the wall and getting into areas where they preferred you not to go,” he said. “There was a lot of [people], and they were just climbing over by the dozen — old people, young people, men, women. They were just taking over. … Eventually [the police] came in force, and they were ready for battle. They had all the gear, you know, riot gear, the whole nine yards. I guess they were getting pretty nervous; people were pushing and pushing and pushing to get closer and closer and closer. And finally, they just let some tear gas go.”

Nickerson said there was white, blue, and pink tear gas. “It looked kind of pretty actually,” he told Carr.

He went on to say he was “actually enjoying it all,” and that it was “kind of fun” to watch everyone.

“You can’t condone it, though,” Carr replied, later reiterating that “neither Nate nor I condone what was done — breaking and breaching the Capitol.”

Nickerson said he heard Trump supporters singing songs and chanting “four more years” during the march to the Capitol.

“I just want to make it clear that we — my friend and I — didn’t breach the walls,” he said. “You watch people do it, and it was symbolic more than anything.”

“Are you glad you went down, Nate?” Carr asked later.

“Yeah, oh yeah it was fun,” Nickerson replied. “We first listened to President Trump down [at] the other end, [on] the Ellipse. We listened to him speak, and then everyone trudged down to the Capitol building. The thing was, I think people — we just wanted to get the attention of the legislators, let them know that they can’t do this without consequences. I don’t mean physical consequences. I mean, these Republicans that don’t go along with Trump — I think, 2022, most of them going for election will be tossed out. People aren’t going to forget this.”

Trump supporters across the country have been arrested or faced other consequences for their involvement. In Massachusetts, David L. Ross of Pittsfield was arrested on Thursday and charged with unlawful entry and violating the curfew set in Washington, D.C., on Jan. 6. Therese Duke, who was identified by her daughter after a video of Duke getting punched the night before the siege went viral, was let go by her employer, UMass Memorial Health Care.

Last week, U.S. Attorney Andrew Lelling said that “anyone who traveled from Massachusetts with the intent to commit such crimes will be prosecuted in the District of Massachusetts.”

Arnold’s Lobster & Clam Bar, which made headlines in 2019 after a rare blue lobster made its way into one of the restaurant’s batch orders, is currently closed for the season. 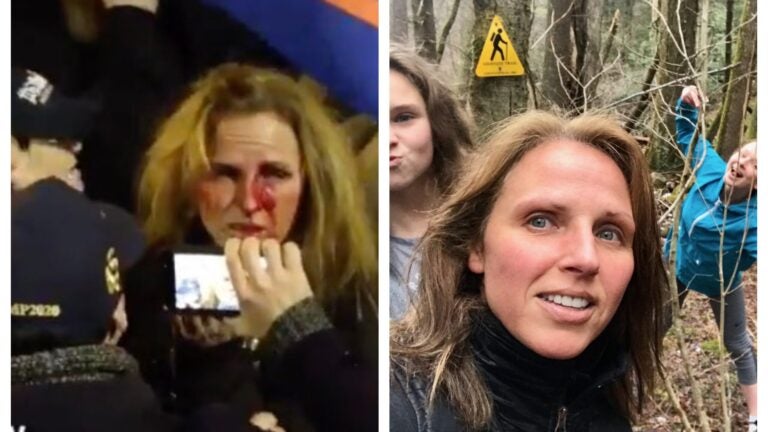 Here’s what we know about the former UMass Memorial Health Care employee who was reportedly in D.C. before the Capitol siege