Pull-apart pork ribs. Expertly seasoned brisket. Smoked chicken wings that will have you chewing the very last piece of meat off the bone.

Massachusetts may not be known for its abundance of world-class barbecue joints, but when you find one, you hold on tight. These are the places that can inspire your own backyard barbecue adventures, whether you’re waiting to christen your new smoker or you’ve spent years nailing down your own custom marinade.

For useful barbecue tips and top-tier advice, we turned to three local pitmasters. These experts shared their favorite places around Boston to stock up on meat, their tricks for stabilizing heat while you cook, and the spices you should always have in your cabinet.

Oh, and they want you have fun while you’re doing it, too.

To Husbands, barbecue is a timeless American cuisine.

“I’m somewhat of a traditionalist, meaning that I like to honor the past and honor what has been done before,” Husbands told Boston.com. “Barbecue is an American classic.”

The pitmaster and founder of The Smoke Shop BBQ, which has four locations around Boston and Cambridge, regularly teaches barbecue and grilling classes at his restaurants. He has written a handful of cookbooks, including “Pitmaster,” on the art of cooking great barbecue. He is rife with tips on smoking fantastic ribs, brisket, and chicken wings, and said it all starts with the right tools.

“You need a good smoker,” Husbands said. “And there’s plenty of great ones out there.”

For a local option, he recommended one from Humphrey’s BBQ, Inc., based in West Newfield, Maine. Husbands also stressed the importance of a proper thermometer, particularly instant-read versions — like a Thermapen, which reads the cooking temperature in just a few seconds — that allow you to get in and out of your smoker quickly.

“I’m a big fan of the never-evers: no hormones, no antibiotics, but they do need to be corn-fed or at least finished with corn,” Husbands advised. “You do need the fattiness that corn provides. The lean, grass-fed meat unfortunately doesn’t work as well when we’re talking about barbecue.”

One of his favorite butcher shops is Savenor’s Butcher Shop & Market, which operates locations in Cambridge and Boston. Just make sure you get the right cut.

“When cooking brisket, it’s super important that you’re using an entire brisket, what we call a packer cut,” Husbands said. “This should weigh somewhere between 12 and 16 pounds, maybe up to 20 pounds.”

Husbands said that a common pitfall when barbecuing brisket is that the cut is too small.

“You need that long time and you need that big [cut] so that it slowly breaks down and becomes this juicy, wonderful piece of meat,” he advised.

With the right tools and the right meat, all that’s left is the right attitude.

“This is a slow game here,” he said. “Enjoy it, have a beer, talk to your friends, relax. You want to do it right, you don’t want to rush it. This is one of those things where patience is rewarded.”

Originally founded in 1982, M&M BBQ is the brainchild of Marion and Maurice Hill, who sold pulled pork and hearty ribs from food trucks and, at various points, brick-and-mortar locations around Dorchester. Today, it looks markedly different: Marion and Maurice’s grandson, Geo Lambert, has taken over the business, which now operates out of Dorchester Brewing Co. While the menu has slimmed down considerably from its original list of barbecue staples, Lambert has kept the spirit of his grandparent’s dishes intact, continuing to use their original all-purpose seasoning that’s now dusted on chicken, brisket, pork, and a few sides.

With a menu that sports grilled corn on the cob, smoked chicken, and beef brisket, Lambert called M&M’s barbecue style a “North Carolina and Alabama crossover.”

Lambert took over M&M in 2010 and has continued to develop his craft, adding to his arsenal of tips and techniques along the way.

When it comes to marinating meat, timing is key. Lambert said that he advises marinading, seasoning, or applying a rub to the meat at least 24 hours in advance.

“It tends to make the meat a lot more tender and flavorful,” he said. “It gives it time for the meat to absorb a lot of the seasoning, so it’s not just rubbing off on the grill once you throw it up there.”

He gets his cuts of meat for M&M from a variety of wholesale purveyors, but for his personal barbecue and grilling endeavors, he makes the drive to Alpine Butcher in Lowell.

“They have all types of steak and burgers, including specialty burgers loaded with cheese and bacon and blue cheese,” he said. “It’s one of my favorite spots.”

For barbecue fans who are experimenting with different rubs, Lambert recommended playing around with an array of seasonings, keeping a stock of salt, garlic powder, onion powder, brown sugar, black pepper, and paprika as a foundation.

“That’s a really great base to have in your cabinet as a mixture of seasonings that you can pretty much use on anything,” he said.

Above all, Lambert said he wants people to have fun while cooking.

“Barbecuing is the easiest way to have a good time and share some laughs,” he said.

Ask where to find excellent barbecue in Massachusetts, and you’ll likely hear the name B.T.’s Smokehouse roll off people’s tongues. The roadside joint in Sturbridge, founded in 2007 by pitmaster Brian Treitman, has garnered national praise, and has grown its footprint with two sister outposts: B.T.’s Fried Chicken and BBQ, which Treitman opened in Worcester in 2020, and a concession stand at Worcester’s newly opened Polar Park, which launched earlier this year and offers a more concise menu of barbecue sandwiches, mac and cheese, coleslaw, and potato salad.

“Since I started, barbecue has really taken off in New England,” Treitman said. “I think that barbecue is actually becoming a thing up here — we’re not just having clam bakes and lobster rolls. And one of the coolest things is that, for the most part, [the barbecue industry] did really well through the pandemic. It translates well to takeout and it’s comfort food, so it’s something that people wanted.”

Despite his years of expertise, Treitman is still eager to learn. He recently joined a Facebook group called New England Pitmasters, which caters to both barbecue beginners and experts, and helps people connect over barbecue education and advice.

He’s also keen to share his own advice, especially when it comes to heat control.

“I tell this to anybody that’s using offset smokers: One of the biggest complaints I hear is that they have a hard time with keeping the temperature controlled,” he said. “They’re constantly going back and forth with adding more wood and closing up their flues.”

Treitman advised heating your smoker to over 400 degrees before adding any meat to it, then dropping the temperature down as necessary.

“The metal has memory, so that once you get it up to [400 degrees] and then let it drop down to your cooking temperature, it’ll maintain that temperature all day long without having to fight the air flow,” he said.

B.T.’s Smokehouse purchases the majority of its meat from Arnold’s Meats, a butcher shop with retail locations in Chicopee and East Longmeadow and one that Treitman said is friendly to the average barbecue fan.

“You can walk in and buy the same thing that we’re buying without having to get any kind of membership like you would at Restaurant Depot or BJ’s or any place like that,” Treitman said.

Before you hit the butcher shops, Treitman has a few words of warning: Meat prices are skyrocketing right now due to the pandemic and an imbalance of supply and demand, and will be for quite some time.

“Just be aware of it,” he said. “The prices that people are paying now are probably double, sometimes triple, what they were paying this time last year, and it’s probably going to continue.”

Noted. Now, back to the smoker. 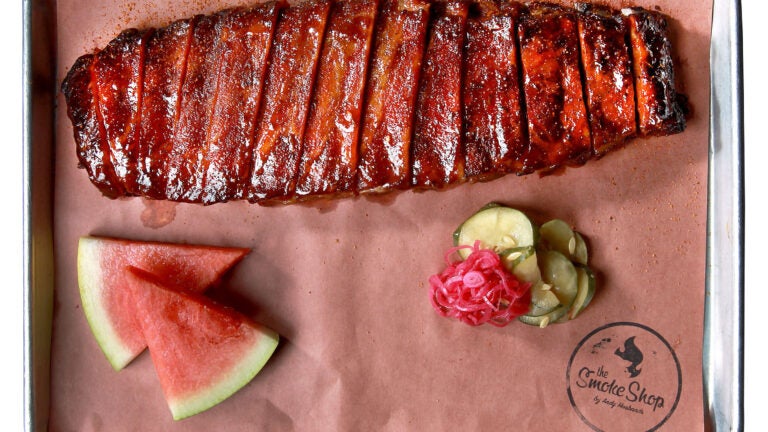 Two restaurants to open at Clippership Wharf in Eastie