It’s not easy to prepare octopus. When overcooked, the tentacled cephalopod can result in a chewy, rubbery mess, making diners work for their meal. But when done right, octopus can be a tender delight, incorporated into salads, entrées, and pastas in a range of cuisines, from Mediterranean to Japanese to Greek.

At some local restaurants, chefs are putting octopus front and center, forgoing traditional lobster rolls to create playful octopus rolls or letting grilled tentacles shine alongside complex marinades and salsas. For your next — or maybe even first — foray into the sea creature, here are five octopus dishes to try around Boston.

Forget the lobster roll. Earnest Drinks at Gracie’s Ice Cream in Kendall Square is giving the ubiquitous New England staple a fresh spin, swapping out lobster for octopus in a decidedly more inventive (and wallet-friendly) variation. “We wanted a fresh, light roll for summer and looked at the classic lobster roll for inspiration,” chef James Lavigne said. “Since we tend to zig when others zag in a lot of ways, I wanted to try doing an octopus roll instead. We cook the octopus until it’s super tender, then dress it with just enough mayonnaise to bind it.” The octopus is then seasoned with fish sauce, mirin, and sesame oil, and placed in a bun with lettuce and tomato. (399 Binney St., Cambridge)

For a taste of Greece, make your way to Krasi in the Back Bay, where octopus gets the spotlight in a dish called xtapodi. Chef/owner Theo Tsilipanos uses carob, a popular ingredient in Cretan cuisine, as a marinade for the grilled octopus, then pairs the dish with dollops of Santorini fava. It’s a perfect dish to pair with a glass of wine from Krasi’s vast Greek wine collection, with dozens of options available in sparkling, white, orange, rosé, and red. (48 Gloucester St., Boston)

You’ve likely seen this oceanic beauty from Brookline’s Ivory Pearl splashed all over Instagram, in what owner Ran Duan calls one of the restaurant’s “most popular and Instagrammable dishes.” The octopus is steamed for hours, then crisped in a fryer for 30 seconds before being brought to the diner’s table, resulting in a tentacle that has snap and texture — much like a hot dog. “We decided to add ikura, mustard seed, and apple to add freshness and crunch needed while complementing the mild flavor of the tentacle,” Ran said, calling the hot dog a “crowd pleaser.” Get it at the sleek seafood emporium, paired with some Ivory fries that come with caviar mayo. (1704 Beacon St., Brookline)

When it opened in Coolidge Corner’s Arcade Building in the summer of 2019, Gantetsu-Ya focused on two things: Takoyaki and okonomiyaki. The latter retired from the menu earlier this year and was replaced with chicken karaage, but thankfully the takoyaki has remained — and we’re all the better for it. The Japanese snack, also referred to as octopus balls, is comprised of fried spheres of seasoned batter containing bits of octopus. At Gantetsu-Ya, one order comes with eight takoyaki, which are sprinkled with nori powder, sweet takoyaki sauce, and thin curls of bonito flakes. If you’re curious about octopus but shy away from the sight of a long, curled tentacle, takoyaki might be your perfect gateway dish. (318 Harvard St., Brookline)

“Being a Spanish/Portuguese restaurant, we definitely needed to have an octopus dish,” Michael Serpa, chef/owner at Atlántico in the South End, told Boston.com. “The classic would be very simply done, [either] a la plancha or grilled with a bit of olive oil and paprika.” Instead, the kitchen employs bold flavors, pairing the simmered and seared octopus with a salsa negra made with roasted tomatoes, peppers, garlic, and squid ink, plus a piquillo pepper jam using sherry vinegar. Diners will find the octopus, which comes from Galicia and is sourced by Captain Marden’s Seafoods, accompanied by a salad of white asparagus, parsley, mint, pickled fennel, and white onion. (600 Harrison Ave., Boston) 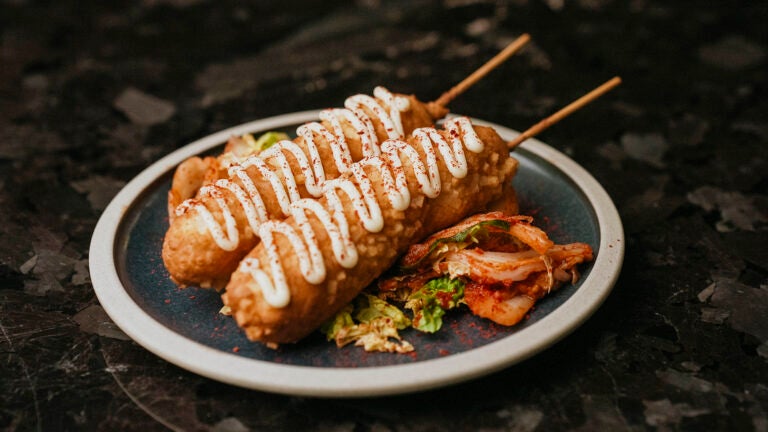