Diggy, the block-headed rescue pup with a goofy smile, seemed to be thrilled by his new owner in a selfie that spread across the internet in June.

We know this photo is going to break the internet and we apologize, but we had to share! After almost 100 days in the…

But Diggy’s online fame nearly cost him his new home. Having seen the viral photo, the police in Waterford Township, Michigan, told Dan Tillery, the dog’s owner, that he had violated the township’s ban on owning pit bulls and that Diggy would have to be returned to the Detroit Dog Rescue.

That set off a legal battle in which Tillery, who was charged with an ordinance violation, had what he believed to be a pretty clear defense: Diggy isn’t a pit bull, though he may look like one. Tillery offered documents from two veterinarians to confirm the dog’s breed, hoping that would prevent the authorities from taking his dog.

On Tuesday, Diggy, Tillery and their supporters got news that would let them smile again: Charges were dismissed in the 51st District Court, assuring that dog and owner could stay together.

“Immediately upon receipt of the signed and notarized affidavits from the veterinarians, we agreed that the charges should be dismissed,” Margaret Scott, a prosecutor in Waterford Township, said in an email.

“We get to keep our boy,” Tillery wrote in a celebratory Facebook post. “He’s a good boy.”

It was an ending that satisfied dog lovers who feared that the dog and Tillery would have to be separated soon after a match that had appeared to start so well.

“People had really invested their emotions into this story, and it’s beautiful to see so many people care about rescue dogs,” said Kristina Rinaldi, the director of the Detroit Dog Rescue, a no-kill shelter.

Tillery found Diggy in a post on the rescue center’s Facebook page. Rinaldi said Diggy nearly missed his chance to be adopted.

Rescue workers occasionally collect dogs from Detroit Animal Control; on one visit, workers loaded 12 dogs into a van before Diggy caught Rinaldi’s eye, she said. He was in one of the kennels, looking sad, and all of the volunteers said they wanted to give him a chance. With no more room in the van, she loaded the dog into her own car.

He was originally named Sir Wiggleton because of a “funky butt wiggle” he would do when he was excited, she said.

Rescue workers put him through the usual process: He was given medical treatments and socialized, playing with other dogs at day care. The dog rescue would occasionally put his photos on its Facebook page, hoping someone would be inspired to adopt him.

About three months later, Tillery, who had seen one of the photos, arranged a meet-and-greet with Sir Wiggleton and rescue workers at his home.

That viral Facebook post quickly brought trouble. Lt. Todd Hasselbach of the Waterford Township Police told The Detroit News in June that proof of Diggy’s breed could eventually allow Diggy to remain with Tillery, but that Diggy didn’t pass the eye test.

The township has since changed the ordinance on pit bulls, allowing veterinarians to determine a dog’s breed instead of police officers, according to The Oakland Press. With an eye toward safety, bans on pit bulls are common in the United States but are often criticized by animal rights activists and pit bull owners.

Rinaldi said spending time with Diggy made clear he was no threat. She described him as “the biggest goofball” who “loves everybody” and has “big slappy cheeks.”

“Because Diggy has a blocky head and a big smile, he was automatically judged like he was dangerous,’’ she said, “and this is probably the sweetest dog you’ll ever know.” 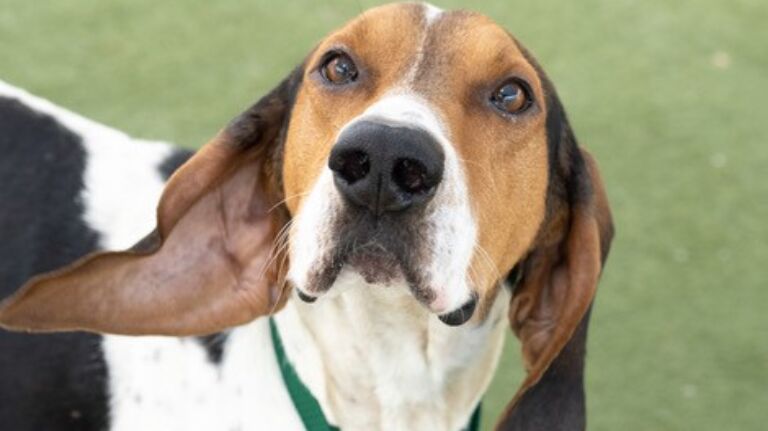