A relaxed-looking juvenile Hawaiian monk seal lounges near a sandy white beach on some green foliage. Its eyes are half-closed and it has a serene expression on its face. But the seal’s calm demeanor is surprising.

Why? Well, there’s a long, black-and-white eel dangling from its right nostril.

“It’s just so shocking,” Claire Simeone, a veterinarian and monk seal expert based in Hawaii, told The Washington Post on Thursday. “It’s an animal that has another animal stuck up its nose.”

Simeone wasn’t the only person stunned by the photo of the seal and its unusual facial ornament that was shared earlier this week on Facebook by the National Oceanic and Atmospheric Administration’s Hawaiian Monk Seal Research Program. The picture – taken this year in the remote northwestern Hawaiian islands – has since gone viral, drawing attention to a rare phenomenon that continues to baffle scientists who are now begging the endangered seals to “make better choices.”

It all began about two years ago when Charles Littnan, lead scientist of the monk seal program, woke up to a strange email from researchers in the field. The subject line was short: “Eel in nose.”

“It was just like, ‘We found a seal with an eel stuck in its nose, do we have a protocol?'” Littnan told The Post in a phone interview.

There was none, Littnan said, and it took several emails and phone calls before the decision was made to grab the eel and try pulling it out.

“There was only maybe two inches of the eel actually still sticking out of the nose, so it was very much akin to the magician’s trick when they’re pulling out the handkerchiefs and they keep coming and coming and coming,” he said.

After less than a minute of tugging, a two-and-a-half-foot dead eel emerged from the seal’s nostril.

Since then, Littnan said there have been at least three or four reported cases – the most recent occurring this fall. In all the cases, the eels were removed successfully and the seals are “doing great,” he said. None of the eels, however, survived.

“We have no idea why this is suddenly happening,” Littnan said. “You see some very strange things if you watch nature long enough and this could end up being one of these little oddities and mysteries of our careers that 40 years from now, we’ll be retired and still questioning quite how this happened.”

Researchers have already determined this is not the result of a human with a personal vendetta against seals and eels because all the cases were reported from remote islands that are only frequented by scientists. Littnan said he does have a few theories about how an eel could naturally end up wedged in a seal’s nostril.

A seal’s preferred prey – usually fish, octopuses and, of course, eels – like to hide within coral reefs to avoid being eaten, and since the marine mammals don’t have hands, they have to hunt with their faces.

Perhaps, he said, a cornered eel decided that the only way to escape or defend itself was to swim up its attacker’s nostril and young seals who are “not very adept at getting their food yet” were forced to learn a tough lesson.

But Littnan said that theory doesn’t make much sense.

“They’re really quite long eels, and their diameter is probably close to what it would be for a nasal passage,” he said.

He added that a monk seal’s nostrils, which reflexively close when they are diving for food, are very muscular and it would be difficult for any animal to push through.

“I struggle to think of an eel really wanting to force its way into a nose,” he said.

The other way eels might be ending up in nostrils is through throwing up. Similar to how people sometimes end up accidentally spewing food or beverages from their noses, that could also happen to seals, who often regurgitate their meals.

Still, Littnan said it doesn’t seem possible that a “long, fat eel” would end up going through a seal’s nose rather than out of its mouth. The “most plausible” theory, he said, is that monk seal teenagers aren’t all that different from their human counterparts. Monk seals “seem naturally attracted to getting into troublesome situations,” Littnan said.

“It almost does feel like one of those teenage trends that happen,” he said. “One juvenile seal did this very stupid thing and now the others are trying to mimic it.”

Though no seals have died or been seriously affected by the eels, having a dead animal up their noses for any extended amount of time poses potentially adverse health impacts, said Simeone, director of Ke Kai Ola, a monk seal hospital in Hawaii run by the Marine Mammal Center.

With an eel lodged in its nose, a monk seal would not be able to close the blocked nostril when diving, which means water could get into their lungs and cause problems, such as pneumonia, Simeone said. A decomposing eel carcass could also lead to infections, she said.

On Facebook, the photo of the seal had more than 1,600 reactions as of early Friday morning. The caption read, “Mondays . . . it might not have been a good one for you but it had to have been better than an eel in your nose.” It also became a trending moment on Twitter.

WHEEEEEEN THEEEEE
NOSE OF A SEAL
HAS BEEN STUFFED WITH AN EEL
THAT’S A MORAY https://t.co/rjDabSvvtw

Many expressed sympathy for the seal having to experience what one Twitter user described as “the most uncomfortable thing ever.”

“RIP eel, but how satisfying must it have been for the seal when it was pulled out?” another person wondered.

Littnan, however, told The Post the young seal “seemed apparently fairly oblivious to the fact that there was two feet of eel sticking out of its face.”

In general, Simeone said marine animals are “very stoic,” adding, “It’s amazing the kinds of things they can tolerate.”

While “eel snorting” has yet to really catch on in the seal community, Littnan said he hopes it never does.

“We’re hoping it’s just one of these flukes that will disappear and never be seen again,” he said.

If monk seals could understand humans, Littnan said he has a message for them: “I would gently plead for them to stop.” 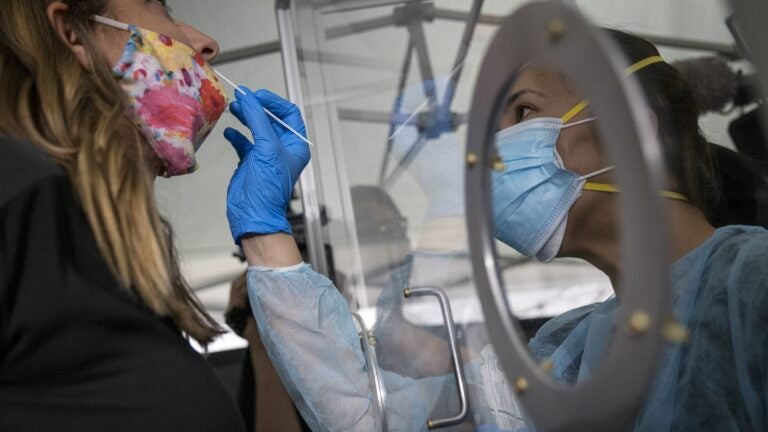 When coffee smells like gasoline: COVID isn’t just stealing senses — it may be warping them