A 17-year-old North Carolina girl has undergone surgery to amputate her leg and “some fingers” after a terrifying shark attack in which her paramedic father fended off the shark by punching it “five times before it let go.”

“I will be OK,” Paige Winter, of New Bern, North Carolina., promised in a statement released Monday by Vidant Medical Center in Greenville, North Carolina, where she is described as being in good condition. Still, she is expected to require further surgery for the injuries she sustained when she was attacked as she stood in water off North Carolina’s Fort Macon State Park near Atlantic Beach at around noon Sunday.

UPDATE: Paige Winter had more surgery today after being bitten by a shark in Atlantic Beach. She had operations done to her hands & a closure of her leg amputation.

Her family said:
“Her courageous spirit continues to be a beacon of light. We appreciate the prayers & support.” pic.twitter.com/VdGtAyzqcg

Winter’s grandmother, Janet, described the horrible attack in a Facebook entry, writing that Charlie Winter had repeatedly struck the shark in the face as he sought to rescue his daughter, whom she said required the amputation of “one leg above the knee and some fingers.” Atlantic Beach Fire Department officials confirmed for WCTI.com that she had suffered “deep lacerations to her leg, pelvic and hand areas.”

Charlie Winter, according to a GoFundMe account created to help with medical expenses, is “a Marine, firefighter, and paramedic [who] has served his country and his community for the last 20 years. Now it’s time for us to rally around him and his family to help them in their time of need.”

“I would like to thank everyone for reaching out and helping me the last 24 hours as a result of the shark attack that occurred at Fort Macon on June 2,” Paige Winter said in her statement. “Although I have extensive injuries, including an amputated leg and damage to my hands, I will be OK.”

In a statement on a GoFundMe page, Winter’s family thanked “the individuals on the beach who helped and her heroic father who saved her life.” The teen’s grandmother wrote, “Thank God our son was with her,” in response to a Facebook reply to her post. “He said he punched the shark in the face five times before it let go.”

Paige and her father “were standing in waist-deep water and chatting and then Paige suddenly got pulled under,” Brandon Bersch, a family friend, told NBC’s “Today.” “As soon as Charlie realized what was happening, he jumped into action and began striking the shark on the nose. Charlie wouldn’t stop until it released his little girl. He lives for his children.”

‘I will be OK,’ says Paige Winter, the 17-year-old recovering from serious injuries after a shark attacked her off a North Carolina coast. pic.twitter.com/BysuNnQkUD

Although it is unclear what type of shark attacked Winter, last month, a cluster of great whites was detected about 20 miles off the coast of the Carolinas. Researchers have been tracking them for more than a decade and one is a 15-footer that weighs more than 2,000 pounds. Robert Hueter, a senior scientist for the ocean research organization Ocearch, said the “sharks have been coming here for a millennia; for as long as the East Coast of the United States has existed, these sharks have been in their waters.”

Tyler Bowling of the Florida Program for Shark Research Bowling praised Paige’s father, who works for the City of Havelock Fire and Rescue Department. “Hitting a shark in the snout or the gills is the best defense if you are being attacked,” he told “Today.”

Despite what happened, Paige was “cracking jokes” after surgery, her mother, Marcy, wrote on Facebook, adding that her daughter “wants everyone to know that sharks are still good people.” 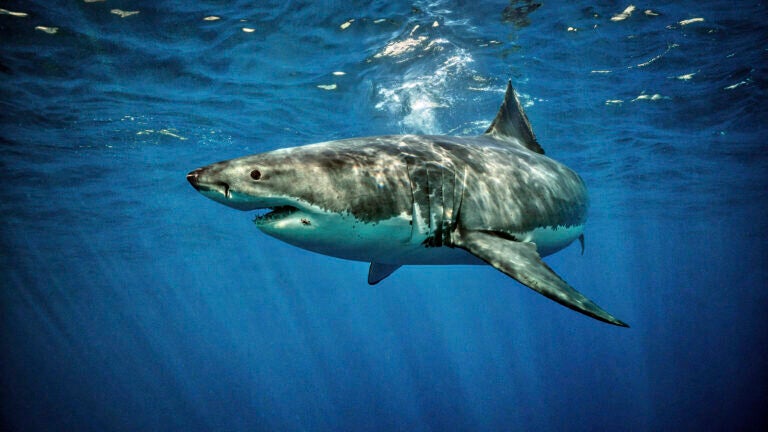