Congratulations to Cleopatra and Inocencio on their new baby boy!

After years of preparation, Boston’s Franklin Park Zoo successfully bred two pygmy hippopotamuses this month. Cleo — as she’s known to fans and loved ones — gave birth to a 13-pound male calf on Monday, October 5. The zoo announced the birth Tuesday with a video showing the tiny critter bonding with his mother and receiving a physical exam and a gentle bath from the veterinary and animal care team.

The calf, who is unnamed for now, is the first pygmy hippo ever born at the Franklin Park Zoo.

“The calf was immediately so bright, strong and aware, and was holding his head up right away,” said Dr. Eric Baitchman, Zoo New England’s vice president of animal health and conservation, in a press release. (Zoo New England runs Franklin Park Zoo and Stone Zoo in Stoneham.)

While Franklin Park Zoo is open for timed reservations, visitors won’t be able to see Cleo or her small son for the time being. The zoo says it will update its website and social media when they’re done “bonding behind the scenes.” Visitors to the Tropical Forest section of the zoo might still be able to spot the father swimming about, however.

Mayor Marty Walsh sent his regards to the petite fellow on Twitter Wednesday, though he seemed to confuse the minuscule newborn for his mother.

Welcome to Boston, Cleo! We’re happy to have you at the Franklin Park @zoonewengland.https://t.co/JjAPr2F6YR

The diminutive youngster is Cleo’s first successful progeny. She had pregnancies in 2018 and 2019, but they ended up stillborn due to complications from prolonged labor. The staff at the zoo made sure to induce Cleo for her most recent pregnancy so that they could help with the birth if needed.

Zoo New England participates in the Pygmy Hippo Species Survival Plan, an inter-zoo program that helps the recovery of endangered or threatened species. The father, Inocencio, came to the zoo in 2013 from Chile as part of an international effort. The International Union for the Conservation of Nature estimates that there are less than 2,500 pygmy hippos left in their native region in West Africa. 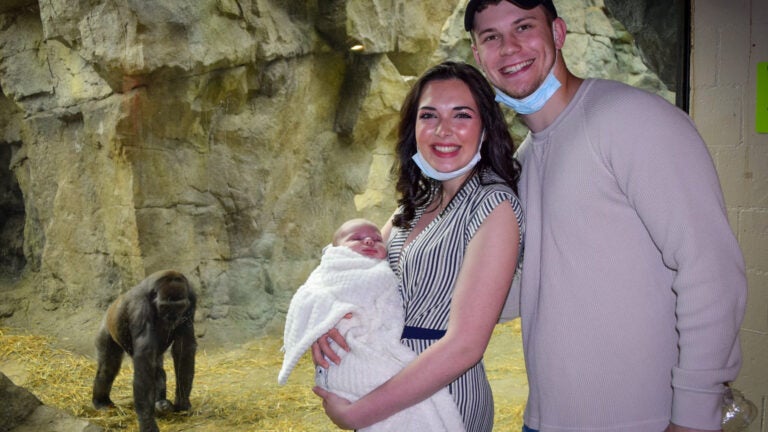