The mission began before dawn, as a team of scientists covered head-to-toe in thick white protective gear descended on a quiet backyard in Washington state. Armed with carbon dioxide gas and a powerful vacuum, they approached their target – an nest of insects the size of a basketball – and began whacking away with a stick.

“The thing that came to mind was E.T.,” Josie Shelton, who watched the scene unfold steps from her house in Blaine, Wash., recently told “Inside Edition.” “It looked like it was from another world.”

That was the start of an operation carried out by entomologists late last month to capture and extract the country’s only known nest of Asian giant hornets, a fearsome type of insect that can puncture beekeeping suits with their stingers.

Scientists said this week that the nest had produced hundreds of live specimen, who have been dubbed “murder hornets” on the internet for their painful – though rarely deadly – stings to humans. Among them were nearly 200 queens, who can go on to start colonies of their own after the winter.

“It really seems like we got there just in the nick of time,” Sven-Erik Spichiger, an entomologist at the Washington State Department of Agriculture who oversaw the process, said during a news conference Tuesday.

The agency’s operation was meant to contain the hornets, who may have entered via shipping cargo from Asia, before they could spread across the country and threaten fragile agricultural systems. The honeybees that serve as the hornets’ prey are crucial to pollinating crops, Spichiger said.

As The Washington Post’s Marisa Iati reported earlier this year, Asian giant hornets were first detected about a year ago near the Canadian border, quickly raising alarm among scientists and agricultural officials in the Pacific Northwest.

While the hornets tend to attack insects first, they can target humans if threatened. They may kill up to several dozen people a year in Asia, where they are most commonly found, the Associated Press reported, though experts say the number of fatal cases is likely much lower.

In mid-October, scientists managed to trap a few hornets in the wild, and then uses dental floss to attach radio trackers to the captured specimens. They followed them back to the nest, which Spichiger said was located less than 30 feet from a children’s play set.

At approximately 5:30 a.m. on Oct. 24, Spichiger and his team of scientists set up scaffolding around an alder tree in the Sheltons’ backyard to reach the nest, which stood about eight feet off the ground, according to KOMO.

They blocked off most of the opening with a thick foam covering and wrapped cellophane around the trunk. As some entomologists hit the tree to stir up the hornets, others sucked up the insects through a vacuum hose stuck in the remaining opening to the nest.

Before pumping the tree with carbon dioxide and sealing it with foam cellophane, scientists managed to capture nearly 100 hornets, including two queens. But more insects remained, so officials returned later that week to finish carrying out their plan.

On Oct. 28, they used a chainsaw to cut off the part of the tree that contained the nest, taking this segment of trunk back to a laboratory at Washington State University to analyze the nest. Inside a walk-in cooler, where the cold temperatures stunted the insects’ mobility, the scientists cracked the tree open with a sledgehammer and collected hornets at various stages of life.

Of approximately 500 insects collected throughout the operation, Spichiger said they found nearly 200 queens – an especially concerning figure because most of them were virgins, meaning they would later leave their nest, mate and then start new colonies of their own following the winter.

“There’s no doubt that had we not intervened and destroyed this nest, we would be starting with that number of 200,” he said during the news conference this week.

Because the hornets are well suited to live in many parts of the West Coast – and anywhere east of the Mississippi River – it was crucially important to remove the nest to protect honeybees, which act as pollinators for a wide array of agricultural production, Spichiger said. Entomologists in his department have continued monitoring the area for additional nests in recent weeks, and plan to do so through Thanksgiving.

“Even though we’re fighting this fight in Washington right now, it literally is for the rest of the country,” he added. “To protect our managed pollinator system alone is a great reason to do it.” 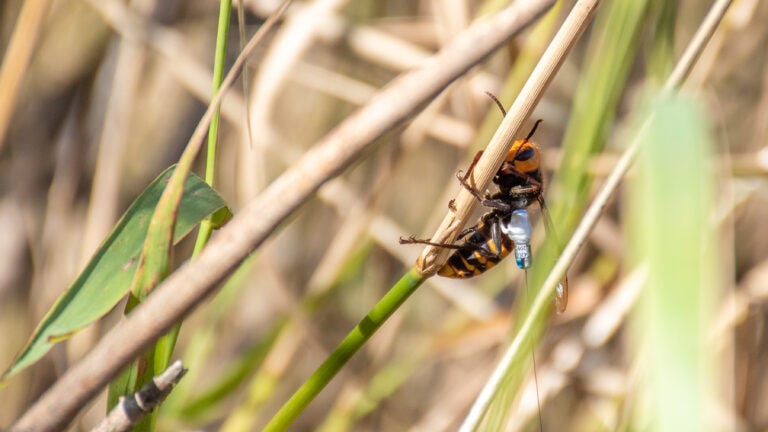