Dozens of endangered Kemp’s ridley sea turtles were traveling from the New England Aquarium on Thanksgiving Eve, but when a rock severely damaged their plane’s propeller, they had to make a pit stop and deboard in Tennessee.

The sea creatures were nearly stranded until a sister aquarium stepped in, offering them overnight sanctuary.

“During a holiday weekend all about giving thanks, we want to express our immense gratitude,” Aquarium workers wrote in a Facebook post Saturday morning.

During a holiday weekend all about giving thanks, we want to express our immense gratitude for several organizations who…

Officials had been sending 30 rescued Kemp’s ridley sea turtles to the Audubon Nature Institute’s Coastal Wildlife Network’s (CWN) Aquatic Center in Louisiana via the Turtles Fly Too organization, but bad weather forced pilots to refuel twice and change course to avoid wind gusts before landing in Chattanooga with a damaged propeller.

“I have always said truly special people work in the business of animal conservation; this has proven to be true so many times in my 30 years doing this work,” New England Aquarium marine animal rescue department manager Connie Merigo said in a statement. “When we learned the plane could not reach its final destination, a flurry of calls went out, and within an hour, we had safe, warm overnight housing secured for these turtles. The zoo, aquarium, and sea turtle rehab network rallied around us in record speed.”

The moment of unity on the night before Thanksgiving, workers said, led to a safe ground transport to New Orleans the next day.

Officials said in a release that pilots loaded the turtles into a passenger shuttle loaned by the Chattanooga Airport and hit the road, meeting staff from the Coastal Wildlife Network halfway to transfer the turtles once more before finally reaching their destination.

Aquarium workers said each endangered turtle received a physical exam and a swim test once they arrived at the Aquatic Center’s facility, and staff and volunteers continued to watch over them for hours after.

“Despite their long journey, all the turtles are doing well,” workers wrote in their post, “but will still require significant care before being released back into the wild.” 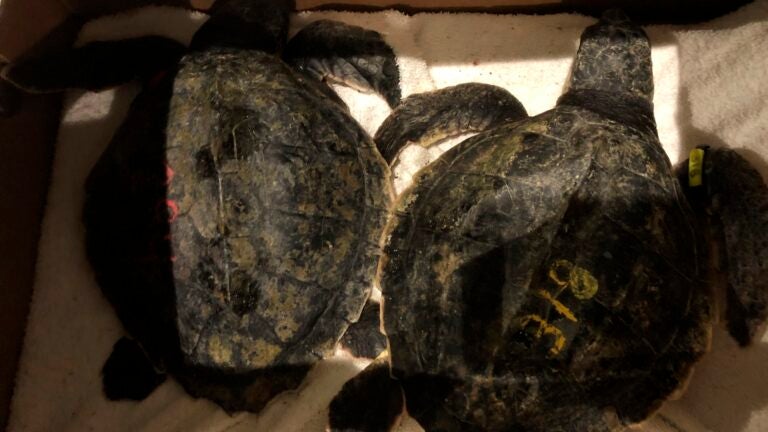