Darthgator bit down on his trainer’s hand during a demonstration for a kid’s birthday party earlier this month, but when the 8-foot-long alligator let up a little, Lindsay Bull thought she’d gotten off easy.

Then Darth clamped down a second time – hard.

“Once he had done that, I knew it was basically game on,” she told The Washington Post.

Bull, 31, knew enough about alligators generally and Darthgator specifically to predict what was about to happen.

She was right. Almost immediately, Darth did just such a roll, a move in which an alligator rapidly spins to subdue and dismember its prey. If Bull stayed outside the enclosure she feared Darth would rip off her arm. So she crawled into his pool, allowing herself to roll with him in an effort to limit the damage.

The whole scene was captured on video by a parent expecting to memorialize a routine demonstration at Scales and Tails Utah, which bills itself as “a family-run reptile and bird educational and entertainment company” that’s been “providing safe, interactive, and educational presentations since 2004.”

Bull, who survived the encounter, was hospitalized for three days before being released.

Owner and founder Shane Richins, 44, told The Post he filed a report with the state’s Division of Wildlife Resources, the regulatory agency that approves licenses for businesses and individuals to keep otherwise illegal animals. Spokeswoman Faith Heaton Jolley confirmed the agency is reviewing what happened to see if anyone violated state rules.

On Aug. 14, Bull led a group of parents and children on a private tour of the Scales and Tails facility in West Valley City for the child’s birthday party. At first, some of the kids were apprehensive, she said, but eventually became more comfortable handling tortoises, lizards and a variety of snakes.

Then she led them to Darthgator. That’s when the video starts, with Bull telling the group that Darth is supposed to remain in his concrete pool and not come out unless she commands him to do so.

As Darthgator was lying in the pool, his head hanging over the edge onto the platform, Bull told the group she was going to move him back, warning them it could be a little boring, as several children pressed up against the Plexiglas barrier. Then she opened the door, stuck her left hand straight out and commanded him, “Darth, back!” as the alligator lifted himself onto the platform, opened his mouth and moved toward her.

Bull used her left hand to push the underside of Darth’s lower mandible, a technical move akin to a stiff arm, and successfully moved him into his pool. It’s something she has done to Darth hundreds of times before without a problem, she said.

But this time, his head rolled to the right, off her hand, the video shows. Darth then snapped it back to the left and snatched Bull’s hand and lower left arm. Then he yanked her toward him.

Bull – who still appeared calm – crawled inside the pool with Darth, a move that she told The Post was meant to get as close to the gator as possible and roll with him, minimizing how much he could hurt her.

One of the parents, Donnie Wiseman, came up behind Bull while she was still in the pool, grabbed her shoulders and pulled in an unsuccessful effort to save her.

“Hey! We got trouble!” Wiseman yelled.

Bull then instructed Wiseman on how to help. Wiseman jumped in the pool behind Darth and launched himself onto the gator’s back. With Darth immobilized, it became a waiting game. For more than a minute, that’s all they could do. Finally, the gator let go, and Bull was pulled out of the enclosure to safety.

An ambulance took her to the hospital, where she was treated for a tendon that had been damaged and a small chip in her bone, Richins said. But her orthopedic surgeon did a “phenomenal” job and expects her to make a full recovery with physical therapy, Bull added. On Thursday, she had her 38 stitches removed.

Bull doesn’t blame Darth for biting her, and she doesn’t think he was trying to attack her. He was hungry, expected to be fed and bit down on something he thought was food, or at least that’s what Bull suspects because her arm brushed up against his mouth. He let go when he realized it wasn’t. Bull was the one who was “not quite on my toes” doing a maneuver she’d executed hundreds of times before.

“I’m the one that made a mistake,” she said. “Darthgator was just an alligator doing alligator things.”

Richins, who started Scales and Tails Utah 17 years ago, said he hopes state regulators let him keep his permit to have alligators. His business educates people about animals in a way that lets them form visceral bonds that just aren’t possible by simply reading about or seeing pictures of them, he said.

People for the Ethical Treatment of Animals disagrees. Five days after the incident, the animal rights organization called for Scales and Tails to shut down. It sent Richins a letter calling on him to close his business and send all animals to “reputable facilities that can provide a more natural existence.”

“Encouraging people to pay to see an apex predator used as a birthday party prop is greed courting disaster,” Debbie Metzler, an associate director at PETA, said in a statement.

As for Bull, she’s already inching toward a reunification. She wants to get back to training with Darth, and while she hasn’t worked her way up to that yet, she’s taken one step closer. On Wednesday, she joined one of Scales and Tails’ more recent alligator additions, the much smaller Gatortot, for a TV interview.

It was her first encounter with an alligator since Aug. 14.

“Mouth taped, of course,” she said. 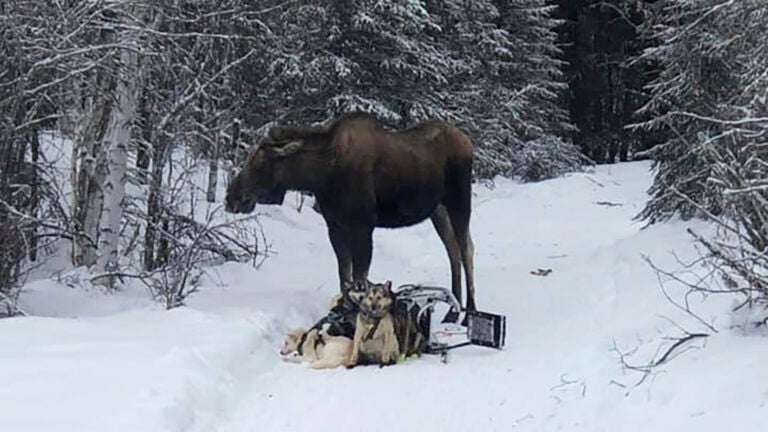