A dead humpback whale discovered on a Provincetown beach this week likely died due to “chronic entanglement,” researchers with the International Fund for Animal Welfare said Tuesday.

The IFAW received a report of a dead whale in Provincetown Harbor — opposite the Long Point Lighthouse — which was confirmed by the Center for Coastal Studies on Monday, the IFAW said in a statement.

The whale was a “sub-adult humpback” whose sex was not yet determined as of Tuesday, the IFAW said. The whale was just shy of 30 feet long.

The IFAW deployed a six-member team that included an animal rescue veterinarian and staff biologists to perform a necropsy on the whale, which sat in an area below the high tide line.

“It does appear the whale suffered from a chronic entanglement,” Misty Niemeyer, stranding coordinator for IFAW’s Marine Mammal Rescue and Research team, said in a statement.

The whale was emaciated and its stomach was empty, free of any prey or plastic, researchers said.

“While we aim to thoroughly examine every whale case that washes up on shore, cases like this one are a strong reminder of how important this work is to determine how we as humans impact these animals,” Niemeyer said.

The Center for Coastal Studies was gathering further information and working to identify the animal on Tuesday, the IFAW said. Samples taken at the necropsy will also undergo further analysis.

The carcass will be left on the beach so it can decompose naturally.

The IFAW serves the Cape Cod and southeastern Massachusetts region. The organization has a stranding hotline — 508 743-9548 — where reports of live or dead stranded whales, dolphins, and seals can be made. 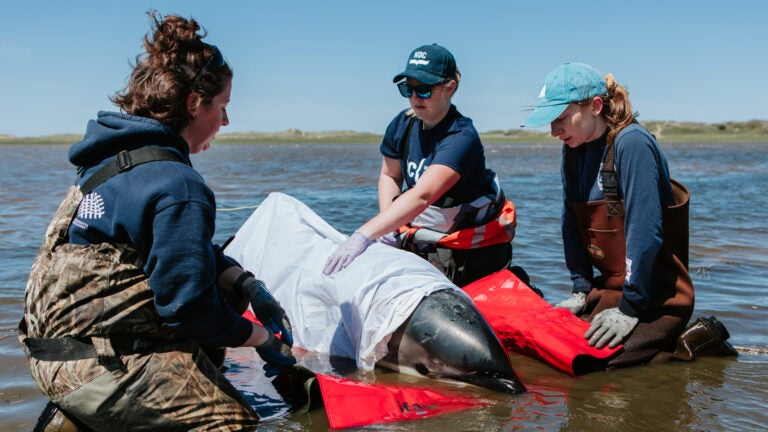