An endangered turtle will be released back into the ocean this summer, despite being found on Ellis Beach with a balloon string all the way through its digestive tract.

Mass Audubon’s Wellfleet Bay Wildlife Sanctuary staff found the Kemp’s Ridley Turtle, also known as an Atlantic ridley sea turtle, cold stunned on Ellis Beach, according to a statement from the New England Aquarium. However, Bob Prescott, leadership for Wellfleet Bay’s sea turtle rescue program, said as soon as he picked the animal up he knew something was amiss.

The turtle had ingested a balloon string that had made its way through its entire digestive tract. “It is a great credit to the Aquarium’s triage and veterinary staff that this turtle survived,” said Prescott.

When the turtle arrived to the New England Aquarium’s Sea Turtle Hospital in Quincy, it was “hypothermic, dehydrated, and anemic” according to the statement.

However, after receiving “fluids, antibiotics, and nutritional support” the turtle was headed into surgery to remove the obstruction. The string was successfully removed by veterinarians Drs. Melissa Joblon and Kathy Tuxbury.

“It was gratifying that we were able to remove the ribbon safely and save this turtle before there was irreversible damage to the gastrointestinal tract,” said Dr. Joblon.

More than 500 turtles have become stranded on Cape Cod this winter, and each hospitalized turtle can take weeks or months to recover, according to the statement. However, more than 85% of triaged turtles have survived. 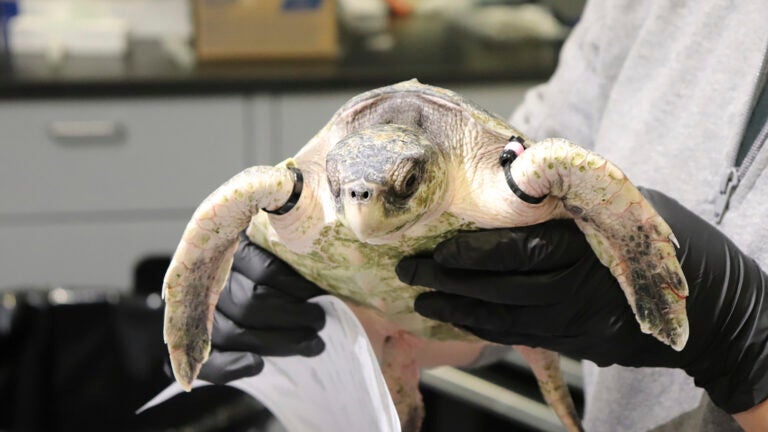