NEW YORK —The Metropolitan Museum’s celebrated exhibition “Jacob Lawrence: The American Struggle” has drawn many visitors, but recently one of them had a revelation: She suspected that one of five panels missing from the artist’s original series of 30 reexamining the nation’s early history had been hanging in her neighbors’ Upper West Side apartment for decades.

She returned home and encouraged them to contact the museum. The neighbors had purchased the small painting by the renowned Black artist for a very modest sum at a friend’s Christmas charity art auction in 1960, to benefit a music school. They are an elderly couple and asked the Met and The New York Times that they not be identified to protect their privacy. They are not art collectors; they had only become aware that their painting of confrontation between soldiers and farmers in Revolutionary War times might possibly be part of a larger series when they read stories about the Lawrence exhibition premiering earlier this year at the Peabody Essex Museum in Salem, Massachusetts, and the curators’ efforts to locate the lost works. Last week, the couple finally contacted an art adviser to help them navigate the Met, one of the country’s largest museums.

On Wednesday, their painting — Lawrence’s Panel 16 from his series “Struggle: From the History of the American People” — was hung at the Metropolitan Museum of Art, reunited with the rest of the known works for the remaining two weeks of the exhibition, through Nov. 1. On view starting Thursday, it will travel on loan to venues in Birmingham, Alabama, Seattle and Washington, D.C., through next fall.

“The painting has been hanging in my living room for 60 years untouched,” one of the painting’s owners said, adding that she bought it with her husband when she was 27. She said the pair had initially put off contacting the Peabody Museum early in the year because they were traveling to Florida. A child of immigrants, the owner said she grew up in the South Bronx and studied Latin and art appreciation — her daughter and granddaughter are both artists. She said she has always loved Lawrence’s work and is happy to share it. 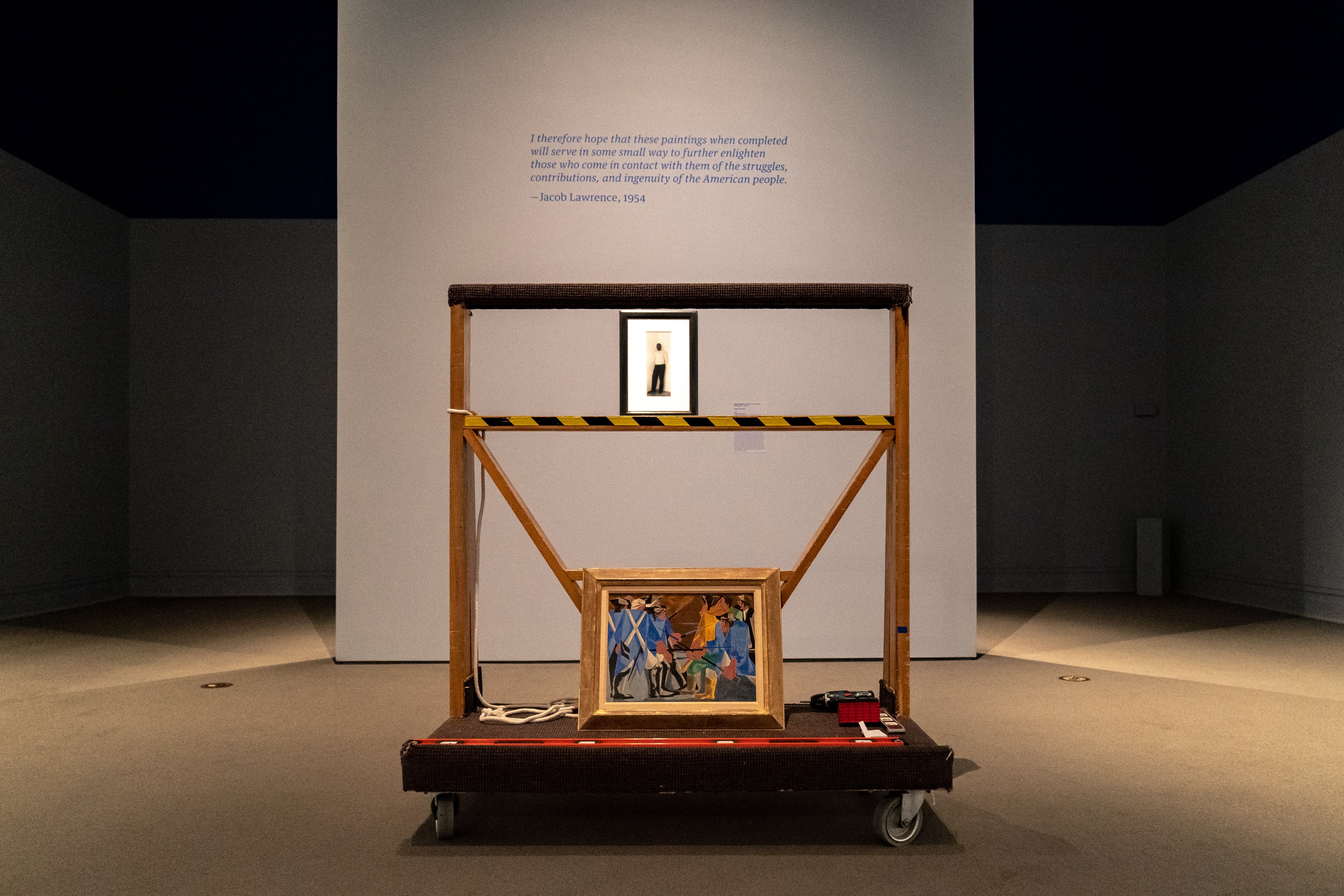 The title of the work given by Lawrence refers to a letter from George Washington about the farmers’ rebellion in Massachusetts: “There are combustibles in every State, which a spark might set fire to. — Washington, 26 December 1786.”

“Last week a friend of mine went to the show and said, ‘There’s a blank spot on the wall and I believe that’s where your painting belongs,’ ” she continued. “I felt I owed it both to the artist and the Met to allow them to show the painting.”

The Met’s director, Max Hollein, said in a statement, “It is rare to make a discovery of this significance in modern art, and it is thrilling that a local visitor is responsible.”

Randall Griffey, the co-curator of the Met’s presentation (with Sylvia Yount), said in an interview Tuesday that he learned of the panel’s existence just last week, when he was copied on a long email chain.

“Given that this body of work was now just across the park from the owners, at the Met, that’s what tipped the balance for them to figure out a way to reach out,” Griffey said.

Any curator would be suspicious at the outset of the work’s authenticity, Griffey said, but the images he was sent were immediately compelling. The work was signed and dated 1956, the year Lawrence completed the series. The subject, Shays’ Rebellion, also lined up historically to the missing Panel 16 in the cycle, for which no photograph exists — only the title given it by Lawrence from a letter by George Washington referencing the lead-up to the rebellion in Massachusetts: “There are combustibles in every State, which a spark might set fire to. — Washington, 26 December 1786.”

“It’s a group of blue coats — new American officials — in an obvious confrontation with hardscrabble farmers, which is what the Shays’ Rebellion is about,” said Griffey, adding that the angular, cubist composition and palette with earthen skin tones are the hallmarks of the series. The Met’s modern paintings conservator, Isabelle Duvernois, who has worked intimately with Lawrence’s works in the exhibition, paid a visit to the couple’s apartment to give her own appraisal and guarantee that the painting was in condition for exhibition and travel.

It was. “If it had lived with smokers for the last 60 years, we wouldn’t have been able to show it without cleaning,” Griffey said.

Drawing out missing works is what the exhibition’s organizing curators — Austen Barron Bailly, formerly at the Peabody and now chief curator of the Crystal Bridges Museum of American Art in Bentonville, Arkansas, and Elizabeth Hutton Turner, a professor at the University of Virginia — had hoped would happen as they worked to reconstitute the dispersed series through many years of research. 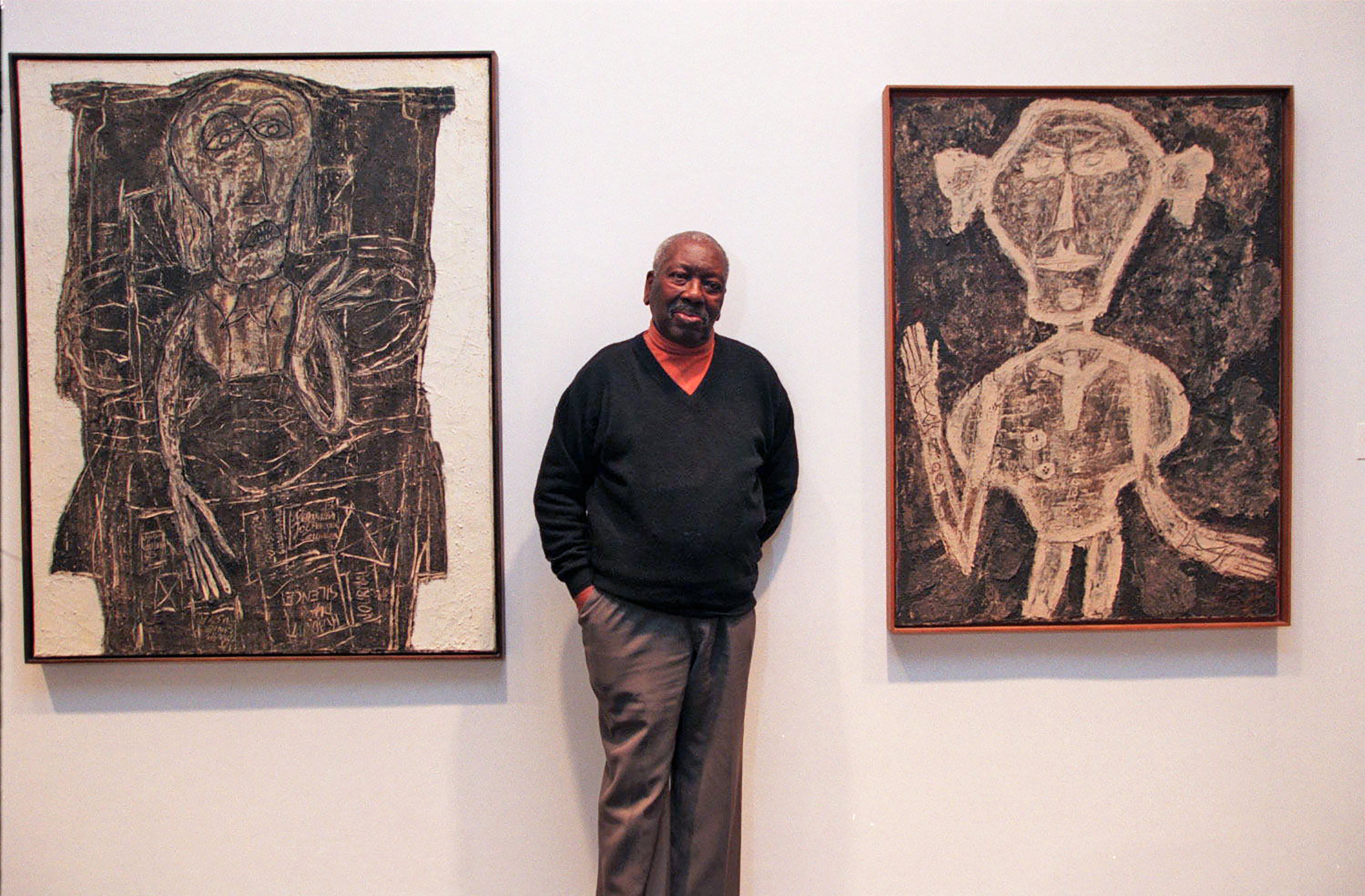 Jacob Lawrence at the Museum of Modern Art in New York in 1996.

Lawrence, one of the leading artists of the 20th century, painted “Struggle: From the History of the American People” from 1954-56 in the midst of the civil rights movement — presenting a more expansive view of building a democracy that integrated Black people, Native Americans and women in the narrative cycle.

It is the only one of Lawrence’s 10 series not preserved intact in public collections, which is partly why “Struggle” has been little known until now. In the late 1950s, the artist’s dealer, Charles Alan, showed “Struggle” twice at his gallery and approached multiple museums about acquisition — with no takers. It was the era of the McCarthy hearings, and Bailly, the curator, suggested that the incendiary politics of the time “played a role in the reception of this project.”

The series then was sold to a private collector, William Meyers, without any restrictions on keeping the panels together, which he soon began reselling piecemeal. “Early indications suggest that the first owner of the series may have offered Panel 16 to the art auction,” where the current owners purchased it in 1960, Griffey said. He added that details of the provenance still need to be firmly nailed down. (According to experts, a work of art purchased at a charity auction without provenance to back it up can be a problem for acquisition or resale.) Visitors view the “Jacob Lawrence: The American Struggle” exhibition at the Metropolitan Museum of Art, Saturday, Oct. 17, 2020, in New York.

In 2000, at the publication of Lawrence’s catalog raisonné, six panels from “Struggle” were still unaccounted for. Then in 2017, in the midst of exhibition research, Panel 19, titled “Tensions on the High Seas” (1956), resurfaced. It sold at Swann Auction Galleries in 2018 for $413,000 (quadruple its high estimate of $100,000) to Harvey Ross, who now owns half the series and is the largest lender to the Met exhibition.

“Any new and important Jacob Lawrence that surfaces would be a candidate for selling in the seven figures,” said Eric Widing, deputy chairman, Americas, at Christie’s New York.

Barbara Haskell, a curator at the Whitney Museum of American Art who often shows Lawrence’s work, said the discovery of the missing panel is “really something to be celebrated,” adding that it was “very exciting to begin to pull this whole landmark series together and see it as Lawrence wanted it to be seen.”

But the whereabouts of four works remain unknown. Could lightning strike again? 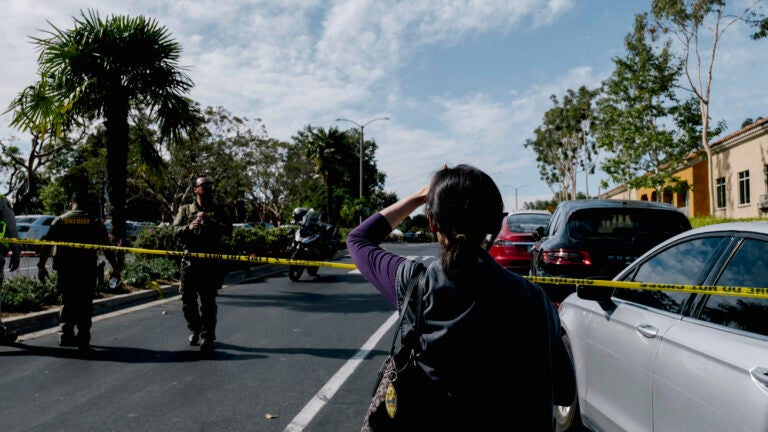