The girl on the wall appears to be looking up, towards the elderly man across from her.

The girl is upright, her back straight and proud. The man wears a smile as he fixes the dog tags around her neck — a transaction between the past and future, supplied by gratitude, of much more than metal: Wisdom.

And just as her elder served his duty, the girl now has a job before her.

“It is now their responsibility to kind of keep the land and the people and you know the peace and love,” explains Jeremy Harrison, the graffiti artist known as Sobek who is behind the mural that now wraps the William E. Carter American Legion Post 16 in Mattapan.

Unveiled last week, the display celebrates the 100th anniversary of the historic post, the first in Massachusetts chartered by African-American veterans. Its founders served in the 372nd Infantry that fought in France during World War I.

The Boston Planning and Development Agency commissioned the mural in collaboration with the city’s Office of Arts and Culture through the PLAN: Mattapan Public Art Project, a $75,000 initiative to boost public art in the neighborhood.

In May, the effort was the force behind a mural created by local teens at the Mattapan Teen Center. Even after Sobek’s latest addition to the community, city officials plan on funding two more mural projects, the locations of which are still being considered.

“The Carter Post is a vital part of our city’s history, and of the history of Mattapan,” acting Mayor Kim Janey said in a statement. “Throughout the BPDA’s PLAN: Mattapan process, we’ve frequently heard the importance of increased public art in the neighborhood. I am so pleased we can properly honor the anniversary of the Carter Post, as well as the Mattapan community, with this local, original artwork.”

A Mattapan native, Sobek fell in love with graffiti around the time he was 11 or 12 years old, and often coped the tags he saw along Blue Hill Avenue.

“I just kind of liked that raw, gritty feel of how that art looks as opposed to like all the Picasso’s and Van Gogh’s that were getting thrown in my face,” Sobek, now 37, told Boston.com. “So immediately, I thought it was different.”

He had earlier been mesmerized by his father’s own drawings — he recalls him sketching out a scene from “Charlotte’s Web” with all of the farm animals — and can remember fondly the paper plate designing contest in fourth grade that fueled his desire for art and hooked him.

In 1998, his cousin, active in Boston’s graffiti scene at the time, introduced him to a group of like-minded artists in Mattapan, Sobek says.

Sobek’s mural at the Carter Post was a collaboration between the artist, the city, and the Post — a vision that was hashed out over several meetings, Sobek says.

In fact, the scope of that vision was so large, Sobek ultimately needed more walls than initially planned.

“The members of the Carter Post 16 were able to watch the birth of his vision from brick wall to Stars and Stripes,” Mary-dith Tuitt, commander of Post 16, said in a statement. “And they both portray the passion of service to the public and respect for the military.”

As Sobek explains, one side is dedicated to local veterans. Sobek wanted to show respect “to those who gave their life, as well as those still fighting for a better world,” he said in a city-issued press release.

Sobek also depicts the roots of Mattapan through honoring its ancestors, the indigenous Mattahunt tribe that once called the area home.

Sobek himself has native ancestry: his family comes from the Niitsitapi tribe, also known as the Blackfoot people, in Montana’s Great Plains. His great, great, great grandfather was a chief, he says.

“It was very very important for me … that we kind of let it be known that Mattapan is representative of the tribe that owned this land,” he says.

The nods to the Mattahunt is also Sobek’s way to “represent all of the other cultures that are in the heart of Mattapan Square because it’s so diverse,” he says.

“By representing the Mattahunt tribe, period, I’m representing all the people who have kind of left their footprints in Mattapan,” Sobek says. “So that to me, you can’t even talk about what it is without paying respects to everybody who have kept the land before we even got here.”

Sobek remembers, even at a young age, thinking how street art was not as respected as other forms of artistic expression — how he was told a career in graffiti was unattainable.

Underscoring that point, he recalled a recent meeting with city officials where he was explicitly told he needed to incorporate more letters into his mural work — a challenge to the “street art norm where you got to have beautiful poetry that’s complemented with flower and birds and butterflies — all the cute stuff,” he says.

“So every time I’m out here and I win something it’s like I’m smiling bigger than the Joker because my whole career has been you can’t, you can’t, you can’t,” Sobek says. “And now it was just like, ‘Listen, you have to have these letters in the forefront.’ So it’s a blessing.” 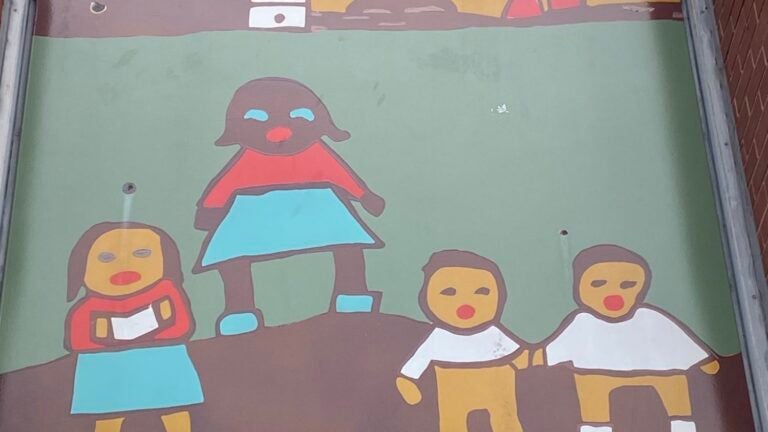 A Providence school's murals were removed because of racist imagery