Chessy Prout wants the world to know what it feels like to be a survivor of sexual assault.

The 19-year-old has written a memoir that covers her life before and after she was sexually assaulted by a classmate at St. Paul’s School in New Hampshire in 2014. Prout was a 15-year-old freshmen at the boarding school when Owen Labrie, then 18, assaulted her as part of a game of sexual conquest on campus known as “Senior Salute.” He was convicted of misdemeanor sexual assault in 2015 but acquitted of rape. 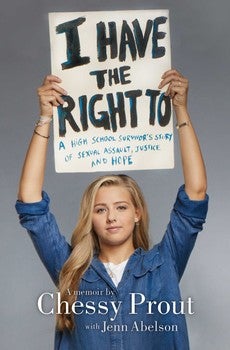 In a statement, St. Paul’s applauded Prout’s “trailblazing work to give a voice to sexual assault victims” and said it “does not condone or tolerate what happened to Chessy.”

Prout, who first identified herself as being the victim in the case in a 2016 interview, wrote her memoir, I Have the Right To: A High School Survivor’s Story of Sexual Assault, Justice, and Hope, with Boston Globe Spotlight reporter Jenn Abelson. (Boston.com is part of Boston Globe Media Partners, which also owns The Boston Globe.) In it, she shares her life and experiences, from 2011 to May 2017, including the texts, social media messages, emails, and letters that she wrote and received from family, friends, school officials, and other survivors to illustrate in painstaking detail how her life was impacted by the crime she survived.

“Going into detail was important to me, because I wanted to show the vulnerability,” Prout told Boston.com. “I wanted people to be able to look inside the mind of at least one sexual assault survivor and realize what we’re feeling and going through at the time. Because a lot of times that’s pushed to the side, and nobody likes to discuss the real pain that we feel.”

Below, the 19-year-old, who is an ambassador for PAVE and started her own social media campaign #IHavetheRightTo, shares what motivated her to write her story and what’s next for her.

This interview has been lightly edited for clarity and length.

Boston.com: Why did you decide to write this book?

Chessy Prout: I decided to write the book for the same reasons that I decided to come forward. A lot of people used my story to help reconcile with their own sexual assaults or start conversations in their families and their schools about sexual assault and consent in high school. So I really felt like I could write a book with my whole heart in it. I wouldn’t have done a project like this if I didn’t think it would help anyone. That’s why I’m writing the book in the first place. It’s mostly because of the survivors who have come to me after I came forward, and even before I came forward, to tell me that because they heard my story — because I had a voice in this situation — they were able either to reconcile with their sexual assault, realize what happened to them was a sexual assault, or just come to terms and start healing and moving on from their trauma. So if I can help at least one other survivor, it will have been worth it.

How are you feeling now that you’ve finished it and are sending it out to readers?

You know I am a little nervous. Because in this book I kind of lay myself a little bit bare. I show my vulnerabilities. But of course I’m so much more than what’s written in the book. The book only has bits and pieces from my life. But again, I wanted to show that being vulnerable and feeling weak sometimes doesn’t mean that you’re weak all over. You can be vulnerable and strong at the same time, and you can find strength after feeling weak.

I’m feeling the strength right now because of help from other advocates for survivors. I hope it helps people in the future, and I hope it starts conversations about how to talk to your kids about consent in schools. 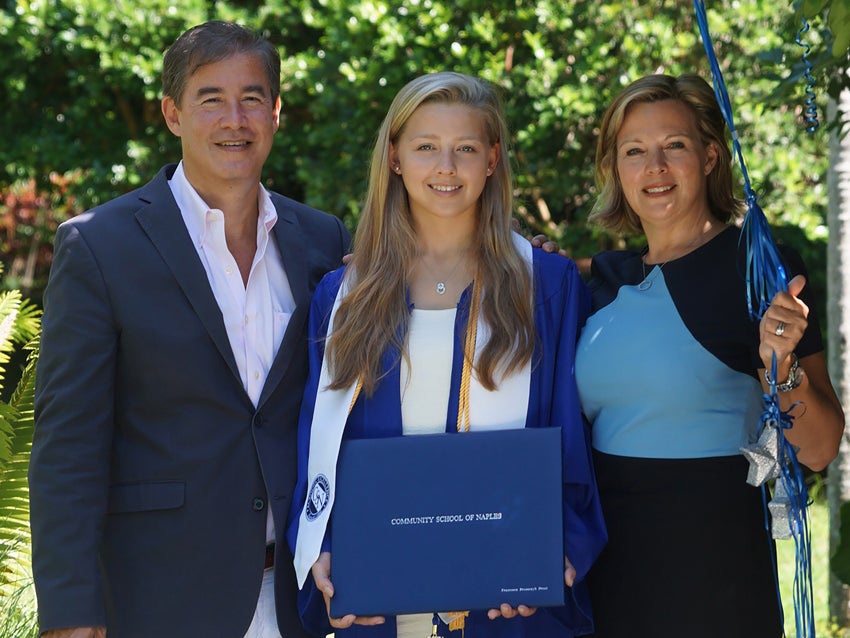 Chessy Prout with her parents, Alex and Susan, at her high school graduation.

Why did you choose to include all the details that you did?

First, I wanted the story to be as accurate as possible. This is my recollection. This is my truth. This is all from my point of view, but I also remembered how it felt during the trial to have my own words be twisted by a defense attorney. That’s not honest, and that’s not the right thing. That doesn’t get the truth out. So I wanted to make sure that we cited as many primary documents as possible, to talk to as many people as possible who remembered these conversations, to be able to get them down as accurately as possible.

Was there anything that you were conflicted about sharing or writing about that made it into the book?

That was kind of the greatest thing about being able to write a book myself and with Jenn. The power and control of telling my story was put back in my hands. So everything that I put in the book, I wanted people to know about. Through the criminal justice process, I really learned — I had to bare myself for that. I had to recount one of the most painful, disgusting things that has ever happened to me. And I made myself make sure that I was completely 100 percent honest with everything I said, because the integrity of the investigation was so important to me. So going through that, I was used to just being bluntly honest. I wanted to share that value and share that way of speaking and writing to a broader audience.

Do you stand with survivors of sexual assault & violence? Declare your rights by posting a message on social media with #IHaveTheRightTo! pic.twitter.com/p5Wu77Xl72

In your book you cover what it was like facing bullying and shaming from people responding to your story and responding to the trial. Are you at all concerned about criticism of this book from maybe people who might argue that you’re profiting monetarily off of the crime? What would you say to detractors or critics at this point?

Nothing can ever make me whole again after this crime was committed against me. Nothing in the world could make it better. Nothing could make it go away. Nothing could change the mental aftermath that I have to deal with, the physical aftermath that I had to deal with. Nothing can take that away. This year I decided to take a gap year [before college] and work on my year in between. So my job this year was to be an author. To write my memoir with Jenn.

So yes, I am being monetarily compensated for that, but that’s the job that I’ve taken on this year. And I’ve had to work pretty, pretty hard to get this done. I hope that the majority of people that it reaches will see it for what I hope for it — an empowering story for conversation, for people to talk about these hard issues, and to realize that this is happening in high schools and younger.

What would you want other survivors to know if they’re considering sharing their own story?

I would want to remind any survivor who’s contemplating telling their story that it’s ultimately their choice, what they want to do. Because for sexual assault, it’s a crime of power and control, and we want to help put the power and control back in the survivors’ hands.

It has been really heartening to see a community of people start rising up to support survivors of sexual assault through the #MeToo movement and the #TimesUp movement. And as heavy as it is to see that there are millions of stories out there just like mine, I hope that they find comfort sharing their stories. Whether it be on social media, whether it be even more publicly, whether it be just to friends and family or a close friend or confidant — just to take comfort in the fact that our community is growing in strength and power. And hopefully we’ll become very, very hard to ignore. Hopefully it will become a cultural norm to support survivors when they come out with their stories.

What was it like working on the book while the #MeToo movement was starting to take off?

My day-to-day was just filled with stories of sexual assault. So for a while, I grew pretty depressed seeing all of this on the television, imagining the hundreds of thousands, the millions of people — young and old — who are dealing with the same feelings that I’ve been dealing with. It almost made me feel like I was powerless again.

On the cover of the book you’re wearing a blue shirt, which you also did for your Today show interview, and there’s a passage in the book where you share that blue was your favorite color until it became associated with your assault. Do you feel like you’ve reclaimed that color for yourself? Is there anything that you feel like you’re still working to reclaim?

There are different things that I’m still working to reclaim. But the shirt that I wore during the Today show interview was the same shirt that I wore the day after I was assaulted. I wanted to do that because it was my favorite shirt beforehand, but I hadn’t worn it since that day — [my sister’s] graduation — two years before the Today show. So I wanted to reclaim that shirt.

My reason for wanting to reclaim things is I didn’t want this man to take away anything else from me. There’s been so much that I’ve been forced to learn and grow up really fast because of what he did to me. And I am working toward reclaiming many different things. In the book I mention some of them. One of them is church. It’s been difficult because at St. Paul’s we went to chapel every morning in this beautiful, magnificent chapel. And yet that was where boys made the announcement, joking about the age of consent [after she was assaulted]. So it took me a while to feel comfortable in these beautiful, wooden chapels again. But we found a wonderful church in Washington, D.C., that’s focus is social justice. It’s the United Church of Christ, and it’s a beautiful wooden chapel, and I’m finally starting to reclaim that at least, now. 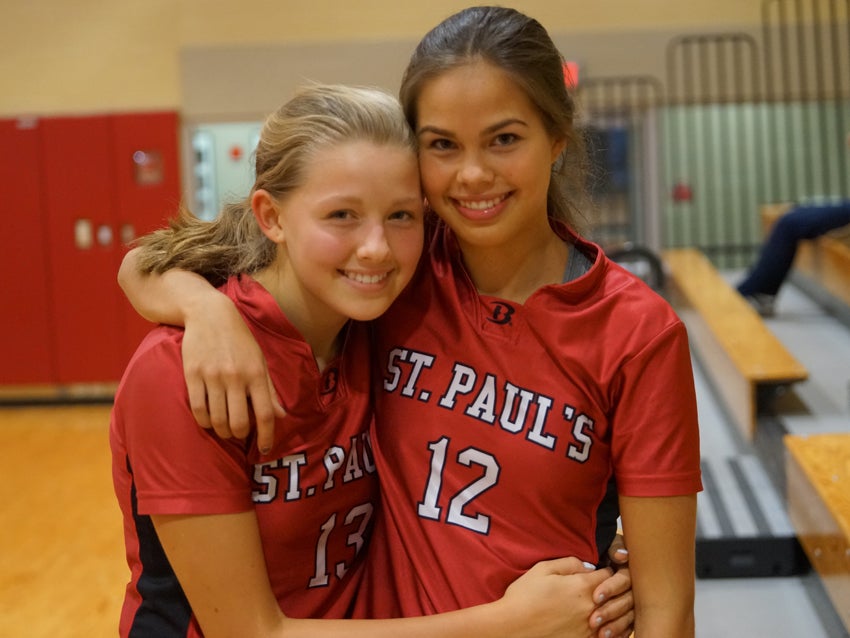 Your family, and especially your sisters, figure prominently in the book. How are your relationships with your sisters, Lucy and Christianna, influencing you as you plan your own future?

Well, I think all three of us have kind of hopped on the advocacy train because of our passions about this issue and because of our anger at how this issue is being dealt with in some places. In the book I talk a lot about how my little sister was a huge inspiration to me with her being much younger, and I still want to help make the world a better place for her and her friends as she’s growing up. So a big focus of mine on the advocacy front will be getting mandatory consent education in all schools, starting at an appropriate age and appropriate topic. But I also just want to just go to college and discover what I want to study. I want to be a college kid and take courses and learn a lot. I’m excited to be at Barnard College next year in New York City. I definitely believe that my advocacy will be present in anything I do for the rest of my life, because I feel so strongly about it. But I believe that can be done through creative avenues as well.