The new children’s book by Boston Marathon bombing survivors Jessica Kensky and Patrick Downes tells the story of a young girl adjusting to life as an amputee with the help and support of her service dog.

“Rescue & Jessica: A Life-Changing Friendship” is based on the real-life bond between Kensky and her almost 6-year-old service dog, Rescue.

Boston.com spoke with Kensky and Downes about the inspiration behind the children’s book, and during the course of the conversation, we learned about a few of the “Easter eggs,” images that have a hidden meaning, that are tucked throughout the book.

Below, learn more about four of the deeper messages that are hidden in plain sight in the book’s illustrations:

There’s a reason why Jessica’s younger brother may look a little familiar in the book.

He’s modeled off of Downes.

Kensky said illustrator Scott Magoon “took it upon himself” to find a way of including Downes into the story, given the character of Jessica is just a teen in the children’s book, aimed for readers age 5 to 9.

“He just came up with it to give me a little shoutout,” Downes said. “So he copied my frames, and I guess my boyish charm, to add me into the story.”

“Boyish charm, ridiculous,” Kensky said with a laugh. “But what’s really sad, plus funny, is that I have a sibling, a little sister. So she kind of feels like, ‘I got written out of the whole thing.’ But it is really funny seeing Patrick’s glasses on this little kid.”

An excerpt from “RESCUE AND JESSICA: A LIFE-CHANGING FRIENDSHIP.” Text copyright © 2018 by Jessica Kensky and Patrick Downes. Illustrations copyright © 2018 by Scott Magoon. Reproduced by permission of the publisher, Candlewick Press, Somerville, MA.

The very last scene of the book shows young Jessica walking across the Lagoon Bridge in the Public Garden.

The authors say that Boston landmark holds particular significance for them.

“Scott drew that all on his own, but that happens to be where Patrick proposed to me,” Kensky said. “So that kind of has special meaning.”

The couple married in August 2012.

In the book, Kensky and Downes explain to readers that Rescue is named for a “brave firefighter.”

In fact, the service dog is named for John Davies, a Worcester firefighter who died in the line of duty, responding to the 1999 Worcester Cold Storage fire. Downes explained every year since the fire that claimed the lives of six Worcester firefighters, NEADS, the Massachusetts nonprofit that trains service dogs through which Kensky received Rescue, has been naming dogs in honor of the firefighters.

“That’s why the little boy in the book is always carrying a little firetruck and it has the [number] 1 on it or in some cases it has the number 15 or 33,” he said.

Crews from the Boston Fire Department’s Engine 33, Ladder 15 were first responders to the Boston Marathon bombings in April 2013. Two firefighters from the station were killed battling a nine-alarm fire in Back Bay in March 2014.

“We felt it really important to give those special acknowledgments to the people who played such an important role in our lives,” Downes said.

Boston’s iconic landmarks and parks feature prominently in the book, but neither the Boston Marathon or the bombings are mentioned. The circumstances of how the character Jessica was injured isn’t delved into. 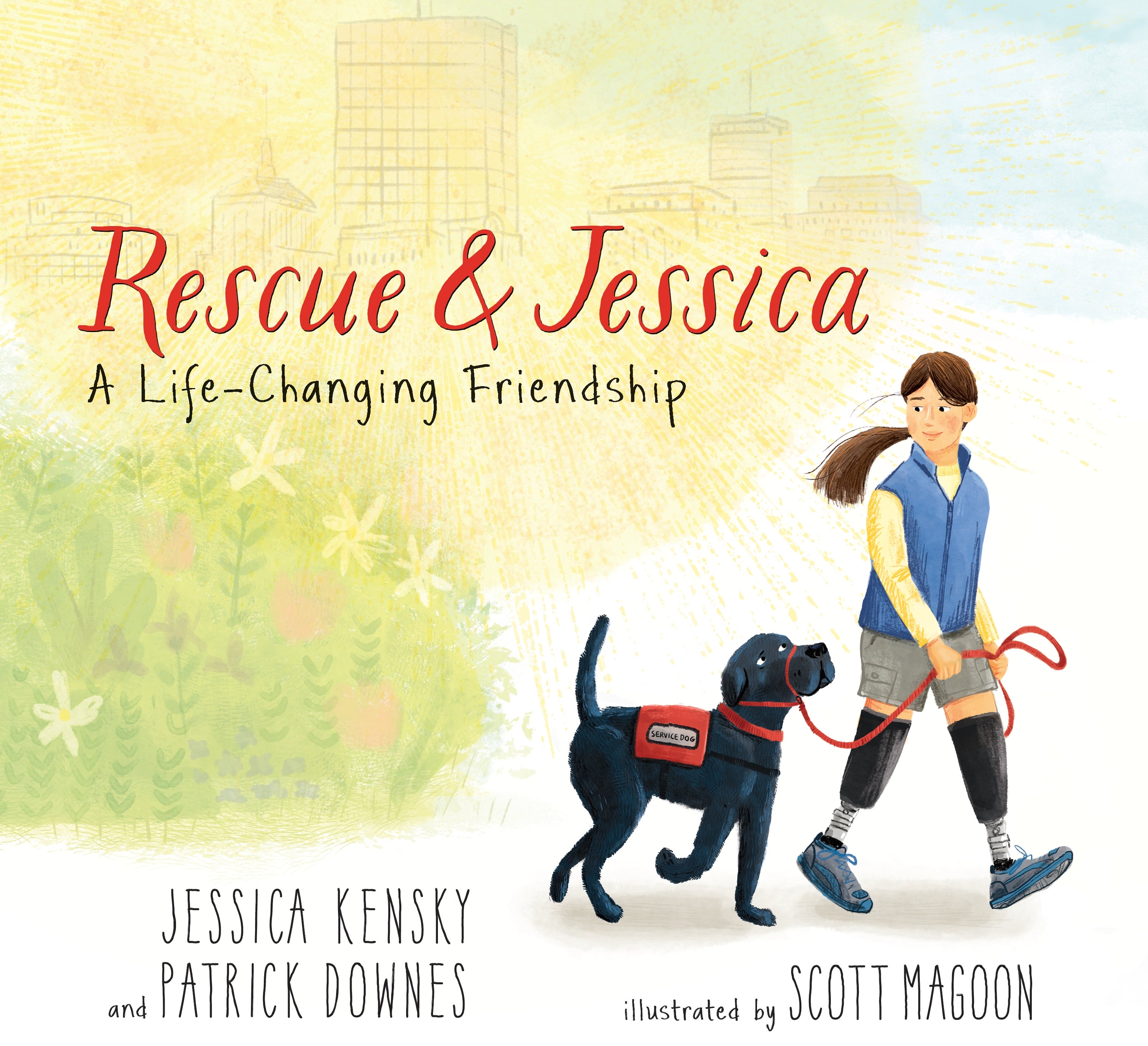 But there is one illustration that gives a subtle nod to Boston Strong, the slogan of solidarity that emerged in response to the bombings.

Kensky says it’s one of her favorite pictures in the book — Jessica is seated in a wheelchair and the balloons tied behind her are in Boston Strong colors, blue and yellow.

The 36-year-old nurse said it’s just one example how the story and its illustrations may speak differently to those who are familiar with the true story behind the picture book without excluding a broader audience.

“I see that and it immediately makes me think of the marathon and Boston Strong, and it brings up all these things for me,” she said of the balloons. “Without it being like, ‘Boston Strong’ and in your face about it. It’s just a very gentle suggestion of it, and so I think the people who were really intimate with it, will pick up on it. And if you don’t, I don’t think you miss out on a great story.”

Kensky and Downes are launching the book at 6 p.m. on Tuesday, April 5, at the Boston Public Library. See the full list of the their local, family-friendly readings below:

When: Thursday, April 5
Time: 6 p.m.
Where: Rabb Hall at the Boston Public Library.

When: Sunday April 8
Time: 2 p.m.
Where:  An Unlikely Story, Plainville

When: Saturday, April 14
Time: 2 p.m.
Where: “Milk & Bookies with Carly & Rescue” in the Venetian Room at the Fairmont Copley Plaza, Boston *Requires tickets*