HARTFORD, Conn. (AP) — For Mark Anderson, the opening game between the Carolina Hurricanes and the Boston Bruins was a trip down memory lane.

Anderson was watching Game 1 closely at a gathering in suburban Hartford Thursday night as the Bruins rallied to beat the Hurricanes 5-2 behind four goals in the third period.

“Look at that,” Anderson said after Patrice Bergeron’s goal put Boston ahead for good. “It’s just like old times. Two b.s. penalties against us lead to two b.s. Bruins goals.”

If Anderson sounds like a Hurricanes fan, you’re not far off the mark. He is in fact a Hartford Whalers fan and was one of several members of the Hartford Whalers Booster Club (yes, it still exists) who watched the game at a Buffalo Wild Wings restaurant in Manchester.

Twenty-two years after Hartford’s only major professional franchise left the city for Raleigh, North Carolina, the bittersweet love of the Whalers is still going strong for some.

The 44-year-old Anderson and the others could not resist getting together as the franchise that left them faced their former New England rival. Most said they were rooting for the Hurricanes, even if it caused them to spit up in their mouths just a little bit.

“I’ve always said that no matter what, I’d never root for the Bruins and never root for the Rangers,” said Dan Narvesen, 40, who came from some 25 miles away in Granby to watch with the club. “So, this would be one of the few times that I will root for Carolina.”

“And, whether it was for a money grab or not, the new owner did bring back the Whalers jerseys for a couple games this year, so at least they are finally acknowledging the past,” he added.

Are Narvesen and other Whalers die-hards living in that past? Former Whalers player Bob Crawford doesn’t see it that way.

Crawford, whose first goal in Hartford was a game-winner against the Bruins in 1983, said the city still holds a special place for many who follow the NHL, comparing it to Green Bay in the NFL: It was a small-market team that shared an underdog identity with the city, fighting for respect and recognition between New York and Boston.

“There is still a smile when people say Hartford Whalers,” said Crawford, who played for the team from 1983-86, still calls Connecticut home and owns several rinks in the state. “People who come here feel that warmth. It’s a special place and they love their Whalers, even now. You still see the colors everywhere.”

The fans also still hold out hope for the NHL’s return. Between beers and glances at the big screen, the talk Thursday night, as it often is when Whalers fans gather, is how to make that happen. Two years ago, hopes were raised as the New York Islanders scrambled to find a new home — the governor even reached out to the NHL — but the team wound up settling on a new location near Belmont Park.

Club President Joanne Cortesa said she believes an NHL return is just a pipe dream, “at least while (Gary) Bettman is commissioner.”

Others, like Matthew Greene, 41, are more hopeful. If the state would agree to rebuild or renovate the aging XL Center, the 15,000-seat arena where the Whalers once played and the city promotes the Interstate 91 corridor between New Haven, Connecticut, and Springfield, Massachusetts, as a viable market, well, there’s a path, he said.

“The problem is nobody in politics here dares to think big enough,” he said. “Have you ever been to a St. Patrick’s Day parade in Connecticut? Look at how much of that green is Whalers shirts. The fan base is here.”

The city is currently home to the AHL’s Hartford Wolf Pack, which draws only about 4,000 fans per game. Whalers fan Scott St. Laurent quickly pointed out the team is a New York Rangers affiliate —and the minors are not the NHL. He said there had been chatter that the Hurricanes might play a preseason game in Hartford, which would allow fans to fill the arena and show the NHL the potential is there.

“Do you think they’d still do that if they win the Stanley Cup this year?” he asked.

“I doubt it,” Cortesa replied.

“A reason to root for the Bruins,” Greene added as Boston scored again. 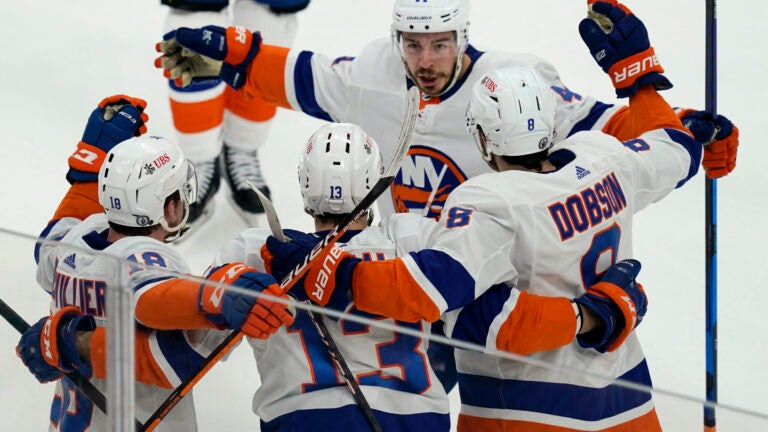