The Celtics could clinch their season series against a potential playoff opponent with a win Tuesday night in Milwaukee. Boston won two of their three regular season games against the Bucks last fall. However, for Aron Baynes, the fourth and final meeting may resurface no-so-great memories.

For one reason or another, Baynes has found himself on the wrong end of several Giannis Antetokounmpo dunks this season. To his credit, the Celtics center never stopped trying to challenge the 23-year-old Bucks star.

Baynes and Antetokounmpo first met at the rim less then 14 minutes into the Celtics home-opener, when the 31-year-old Aussie got caught under the rim and beneath an emphatic, two-handed Greek Freak dunk.

“Oof,” was all that Celtics announcer Mike Gorman managed in his call of the play.

In the fourth quarter, the Bucks ran a pick-and-roll with Antetokounmpo cutting to the basket for an alley-oop. Baynes switched from his man in a futile attempt to provide some help defense. Instead, Antetokounmpo and his 7-foot wingspan simply reached over Baynes to catch the ball mid-leap — and throw it down.

Again, even the Celtics announcers were left awestruck.

This is insanity! #FearTheDeer pic.twitter.com/83gSSTehpM

The dunk was so surprising that Baynes appeared to not even realize that the ball went in the hoop.

The two teams met again the following week in Milwaukee, and Antetokounmpo apparently wasn’t finished. This time, Baynes was ready, too — but that didn’t mean he didn’t once again take the worst of the rematch.

Barreling down the lane in the final seconds of the first quarter, Antetokounmpo leaped from near the top of the key. Baynes met him in the air, but was knocked hard to the court by Antetokounmpo’s ambitious dunk attempt. Based on the reactions of the online community, the Greek Freak had nearly committed the basketball equivalent of murder.

After the game, Baynes explained surviving the experience in his usual good-natured manner.

“I’m always going to step up and try to do the right play for our team,” he told reporters, adding that playing in the paint naturally puts “a bit of a target on me.”

When the Bucks returned to the TD Garden in December, he tried to dunk on Baynes three separate times.

Antetokounmpo was successful twice, though the one that didn’t go down — on which he was fouled — may have been the most spectacular. 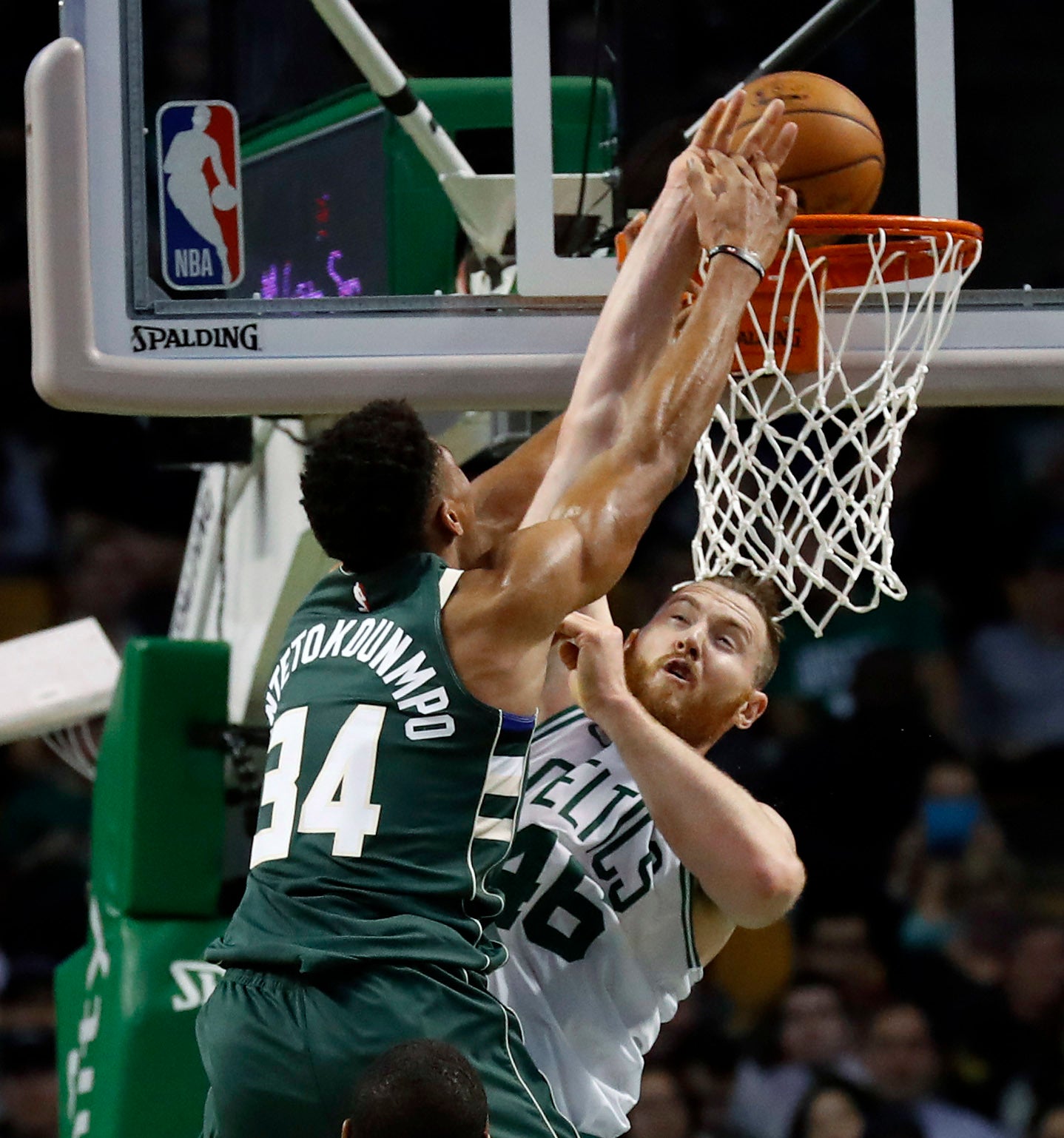 Aron Baynes fouls Giannis Antetokounmpo on a dunk attempt during the first quarter of the game last December.

Baynes said in October that there’s no history between the two players, nor any particular reason that Antetokounmpo has kept trying to dunk on him.

“It’s all good,” he said. “It’s just fun going out there and playing. … I’m just trying to be out there and make the right play.”

Baynes’s (attempted) dunk poster victimization is hardly a Giannis-exclusive (or even opponent-exclusive) phenomenon this season. That said, it probably wouldn’t hurt for him to be extra attentive of where Antetokounmpo is on the court at all times Tuesday night.

Have a question about the Celtics? Email us at [email protected] or tweet us at @BDCCeltics.