Kyrie Irving is apologizing, and this time it isn’t for his opinions about the earth’s geophysical qualities.

Following an enigmatic winter in which Irving cast doubt on his future in Boston, called out and questioned some of his younger teammates, and repeatedly complained about the media, the Celtics point guard is expressing regret for certain “mistakes” he made during the team’s mostly underwhelming 2018-19 season.

“I’ve made a lot of mistakes that I take full responsibility for,” he said. “I apologize. I haven’t done it perfectly. I haven’t said the right things all the time. I don’t want to sit on a place like I’m on a pedestal from anybody. I’m a normal human being that makes mistakes.”

After nearly eight NBA seasons, Irving says he’s still getting used to the attention that comes with being a superstar in the league.

“For me, I think because of how fixated I was on trying to prove other people wrong, I got into a lot of habits that were bad, like reading stuff and reacting emotionally,” he said. “That’s just not who I am.”

Irving’s acknowledgement came after the Celtics’ win Saturday night against the injury-plagued Los Angeles Lakers, following a week in which his leadership was criticized by several former Celtics players. The 26-year-old told Yahoo Sports that he respects ” the ones that came before me, but they didn’t endure social media, the 24/7 news cycle.” He alluded to NBA Commissioner Adam Silver’s recent comments that the current generation of NBA players is “generally unhappy.”

“Adam Silver was right; it really affects people in different way,” Irving said. “These are just different times. People are dealing with anxiety, depression and other disorders that affects their well-being. Some people can’t handle all of this, and we need to be mindful of that.”

According to Yahoo Sports, Irving — who once cited Instagram as a credible information source — hasn’t logged onto any of his social media accounts in three months.

The interview also comes just as the Celtics seem to regaining some of the title-contender form that was expected from them before the season. After losing five of six, the team has won three straight games on their West Coast road trip. Now 41-26, Boston remains in the fifth Eastern Conference playoff slot, but sits just one game back from both the fourth and third seeds.

Irving told reporters last week that the long plane ride from Boston helped bring the team together. Shedding a little bit more light on what his teammate was talking about, Al Horford told NBC Sports that Irving initiated conversations and card games with teammates during the flight.

“He’s the one who got that ball rolling,” Horford said. “We spent a good amount of time together, we talked, we laughed, stuff like that. It just happened to be extended. As opposed to an hour or two hours, almost seven hours. You’d think we’d get sick of each other but, actually, it made the plane ride go quicker. We were just hanging out and talking.”

Following Saturday’s game, Irving said he’s focused on eliminating distractions — beginning with himself — as the Celtics head toward the playoffs. 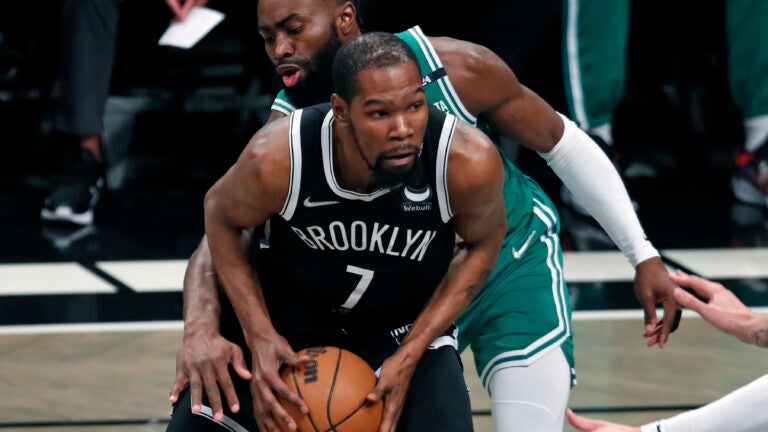