The stock market suffered its worst day of the year Friday after a surprisingly weak report about hiring and employment cast a pall of gloom over the US economy. The Dow Jones industrial average plunged 275 points.

Traders stampeded into the safety of bonds, pushing the yield on the benchmark 10-year Treasury note to a record low. Fearful investors bought gold, causing the price to spike $50 an ounce, and concern about a global economic slowdown drove the price of oil to its lowest since October.

It was the Dow’s steepest one-day drop since November.

The Standard & Poor’s 500 index and Nasdaq composite index both fell more than 3 percent. The Nasdaq has dropped more than 10 percent since its peak — what traders call a market correction. The S&P 500 is just a point above correction territory.

American employers added just 69,000 jobs in May, the fewest in a year, and the unemployment rate increased to 8.2 percent from 8.1 percent. Economists had forecast a gain of 158,000 jobs.

The report, considered the most important economic indicator each month, also said that hiring in March and April was considerably weaker than originally thought.

Earlier data showed weak economic conditions in Europe and Asia, too. Unemployment in the 17 countries that use the euro currency stayed at a record-high 11 percent in April, and unemployment spiked to almost 25 percent in Spain.

There were signs that growth in China, which helped sustain the global economy through the recession, is slowing significantly. China’s manufacturing weakened in May, according to surveys released Friday.

Traders sold all types of risky investments and rushed to the safety of US government bonds and gold. Bond prices rose sharply, briefly pushing the yield on the benchmark 10-year US Treasury note down to 1.44 percent, the lowest on record. The yield ended the day at 1.46 percent.

‘‘Everybody’s looking for a safe haven,’’ said Adam Patti, CEO of IndexIQ, an asset management firm. He’s skeptical of that strategy, believing the swing was driven by short-term traders ‘‘looking to flip in and out of things,’’ rather than long-term investors willing to ride out a few bumps in the market.

May was the worst month for the stock market in two years by some measures. Investors’ worries about Europe’s debt crisis intensified as the month wore on. Greece’s political future is uncertain, and it appears increasingly likely to stop using the euro currency. That could rattle financial markets and make Greece’s economy — already hobbled — even weaker.

‘‘The weaker jobs report translates into anticipation of slower growth ahead and weaker corporate earnings, and that ratchets stock prices lower,’’ Salamone said.

The record-low yield on the 10-year Treasury note reflected rapid buying by traders with the biggest portfolios, including central banks, endowments and pension funds, said Ira Jersey, US interest rate strategist at Credit Suisse. He said money managers were selling investments priced in euros and stashing their money in US securities.

The Federal Reserve undertook programs in 2009 and 2010 to buy US government bonds. Its goal was to lower interest rates and encourage people to buy riskier investments like stocks. At least in public, the central bank so far has resisted a third round of purchases, known as quantitative easing.

Anticipation of bond-buying by the Fed ‘‘might put in a little bit of a floor to the market, but the overall economic picture is still bad,’’ said Bob Gelfond, CEO of MQS Asset Management, a New York hedge fund.

Only 17 of the 500 companies in the S&P index were higher for the day.

Homebuilder stocks fell the most, despite a report that construction spending rose for a second month in April. PulteGroup fell 11.8 percent, D.R. Horton 8.4 percent and Lennar 8.3 percent.

Boeing, the biggest US exporter, fell 3.4 percent, one of the biggest declines among the 30 companies that make up the Dow. Traders fear that the economic slowdown will hurt global demand for its airplanes and defense technologies.

A slower global economy would reduce demand for energy. The price of a barrel of oil fell $3.49 to $83.04, extending a monthlong slide. The price of oil is at a 16-month low. 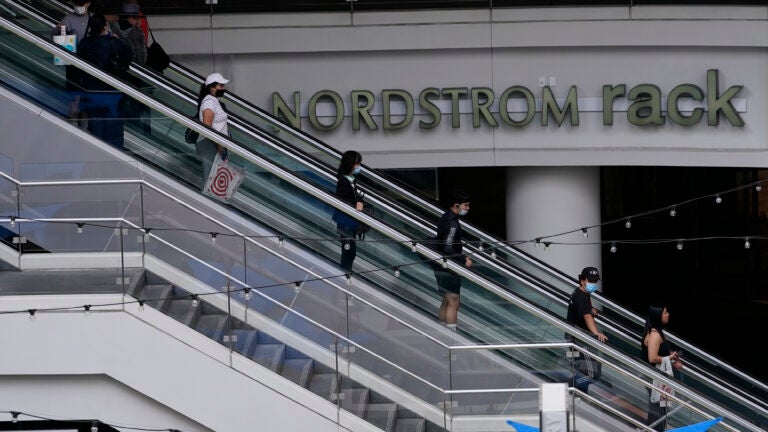 Just how high is the risk of another recession?