The city was selected Thursday by the United States Olympic Committee to bid to host the 2024 Summer Olympics and Paralympics, beating out competing proposals from Los Angeles, San Francisco, and Washington, D.C.

“We’re excited about our plans to submit a bid for the 2024 Games and feel we have an incredibly strong partner in Boston that will work with us to present a compelling bid,’’ USOC Chairman Larry Probst said in a statement.

The USOC first announced the decision on Twitter at around 6:30 p.m.

Boston’s bid was submitted to the USOC in December after previously being selected to a shortlist of U.S. candidate cities in June. The group pushing the idea, Boston 2024, is backed by leaders from the region’s business, sports, and education sectors, among others.

“Boston is a global hub for education, health care, research and technology,’’ said Boston 2024 chairman and Suffolk Construction CEO John Fish in a statement. “We are passionate about sports because we believe in the power of sport to transform our city and inspire the world’s youth. A Boston Games can be one of the most innovative, sustainable and exciting in history and will inspire the next generation of leaders here and around the world.’’

Boston Mayor Marty Walsh has also been involed in the bidding process.

“It is an exceptional honor for Boston to be chosen as the U.S. representative in the running for the 2024 Olympic and Paralympic Games,’’ Walsh said in a statement Thursday night. “This selection is in recognition of our city’s talent, diversity and global leadership. Our goal is to host an Olympic and Paralympic Games that are innovative, walkable and hospitable to all. Boston hopes to welcome the world’s greatest athletes to one of the world’s great cities.’’

The USOC decided on Dec. 16 that it would bid for the 2024 Games, but held off on making a decision on which city to go with until Thursday’s meeting at Denver International Airport. “The decision followed a spirited discussion and more than one round of voting. Ultimately, the Boston bid received the unanimous endorsement of the USOC’s board of directors,’’ the USOC said.

The committee will now work with Boston 2024 ahead of submitting its initial bid to the International Olympic Committee in September. The IOC will decide on a 2024 host city in 2017. Other potential host cities for 2024 include Rome, Paris, Berlin, Hamburg, and Istanbul. Melbourne, Australia, and other cities have also been said to be interested.

President Barack Obama offered his support for the Boston proposal in a statement from the White House:

The President and First Lady extend their congratulations to the City of Boston on its nomination by the United States Olympic Committee to host the 2024 Olympic and Paralympic Games. The city has taught all of us what it means to be Boston Strong. The President and First Lady couldn’t be prouder of this accomplishment and of all of our nation’s athletes, and strongly support the effort to bring the 2024 Olympic and Paralympic Games to the United States. We hope to welcome athletes from around the globe to compete in Boston in 2024.

Boston’s bid has generated debate in the city and the region. An opposition nonprofit, No Boston Olympics, is against the proposal. Its reasons: doubts that the Games can be held without using taxpayer money (Boston 2024 says it can pull operational expenses off with private funding of $4.5 billion, and publicly-funded infrastructure improvements of $5 billion or so); the Olympics’ history of going overbudget; and the supposed “opportunity costs’’—the idea that the city and state would be better served by focusing on other priorities than the Olympics.

But the aspect of the bid that has to this point been most controversial is what No Boston Olympics perceives as a lack of transparency. For several weeks, No Boston Olympics chair Chris Dempsey has called for the public release of the bidding documents that were submitted to the USOC. The group has also complained that no public meetings were held by Boston 2024 or the city ahead of submitting the bid.

Dempsey doubled down in demanding the release of the bid Thursday night.

“The bid needs to be released immediately, and we need to have an open and honest and transparent conversation about what this means for taxpayers,’’ Dempsey said. “I think the people of the Commonwealth will demand it,’’ he added.

Dempsey told Boston.com the group also plans to hold a public meeting in the near future, perhaps as soon as next week, and said further details would be released later. In the past, Dempsey has said the group is considering a ballot question to try and oppose the Games if the bid advanced past the USOC selection phase.

For its part, Boston 2024 has said it would begin holding public meetings in January if it got the USOC nod. “Going forward, Boston 2024 is committed to a thorough and extensive process to discuss the potential opportunity the Olympic and Paralympic Games present our community,’’ Fish’s Thursday night statement said.

Opposition like that seen in Boston was reportedly not as strongly evident in the other U.S. candidate cities. The USOC said in December that public support for the bid was an important element of the selection process, and that it was gauging the support in the four candidate cities.

The elements of the Boston bid that have been publicly discussed—and they could change over time—have focused on the use of existing stadiums (like TD Garden and college venues) as well as the construction of a “temporary’’ 60,000-seat Olympic stadium in South Boston. The bid has been pitched as efficient, and Walsh has pledged not to put the city into debt over the proposal. These principles are in alignment with the IOC’s recently-passed resolutions meant to make the Games (and bidding for them) less expensive, starting with the 2024 host city selection process. The Olympics have faced plenty of criticism in recent years for their expense to the public, and the IOC saw many potential hosts for the 2022 Winter Games drop out as a result. As a 2024 bidding city, Boston will be a test case for the effect of those resolutions.

“This is great news for Boston and the Commonwealth as it provides an exciting opportunity to promote Massachusetts on the world stage,’’ Baker said in a statement. “I look forward to working with Mayor Walsh and the Boston 2024 organization to address the multitude of issues that need to be discussed, including keeping costs down and continuing to press forward on pledges of a privately funded Olympics as the process moves forward before the IOC.’’

The United States has not hosted a Summer Olympics since 1996, in Atlanta. Bids to host the Games in New York in 2012 (they were held in London) and Chicago in 2016 (scheduled for Rio de Janeiro, Brazil) fell flat in front of the IOC.

The USOC is expected to to fly into town for media availability on Friday. Walsh has scheduled an 8:30 a.m. press conference.

The USOC published the below video on Facebook following the announcement. 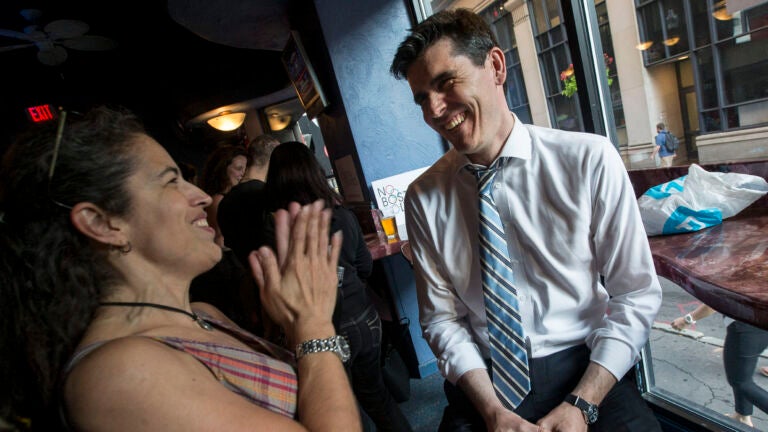