His son was sequestered in a bubble-like isolation room in the bone marrow transplant unit. Each day, Greene would wake up at 5:30 a.m., wait with other parents to use the public shower on the floor, and then head to his job — renovating other Boston-area hospitals.

One thing he learned from the experience: every children’s hospital room should have somewhere for parents to sleep too.

The construction industry in Boston is largely a family affair, and Greene Construction in Allston is no exception.

For Greene, the company president, blood and business are inseparable.

‘You Are Not There by Choice’

Greene Construction specializes in building and renovation projects. Bob’s father, Gabe, founded it in 1966, and it has handled major jobs like the Jimmy Fund Clinic and the Faulkner Hospital main entranceway. The company has since grown to a staff of over 100 people since Gabe’s son, Bob, took over as president in 1993. Gabe died in 2009. 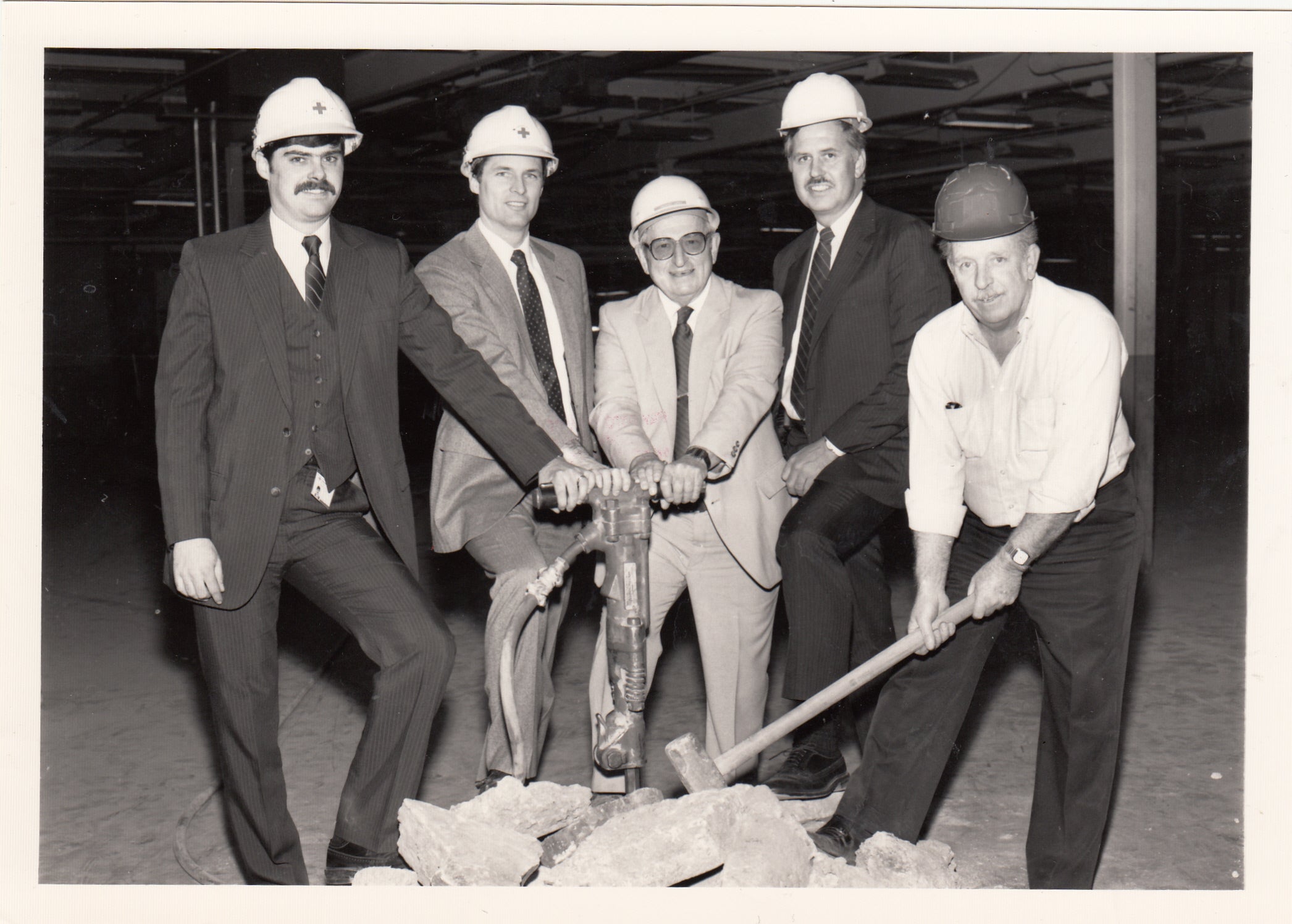 Gabe Greene and Red Cross executives at the 1985 groundbreaking of their North American headquarters.

During his son Bobby’s ordeal, Greene watched over him with his daughter, Shelby, and his wife of 19 years, René.

Shelby turned out to be a perfect bone marrow match with her brother.

“I guess you can say they’re tight,’’ Greene said.

Bobby was treated for four months in 2001 before he was moved to the Jimmy Fund Clinic to recover from his treatment. Bobby, now 13, is autistic and doesn’t speak, but has a healthy immune system. 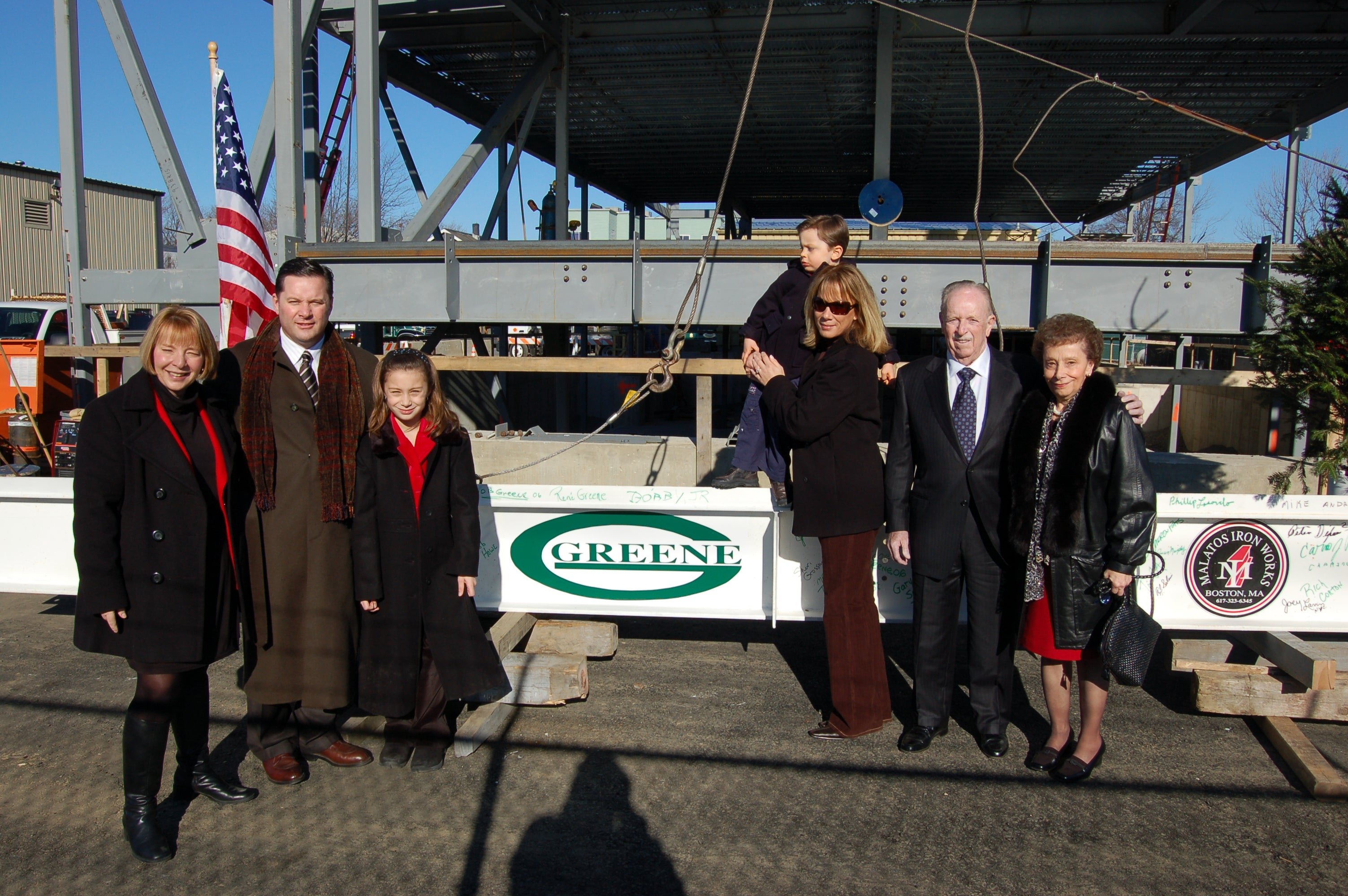 The Greene family, including daughter Shelby and son Bobby.

The following year, Greene Construction was asked to renovate the stem cell floor where Bobby had received treatment during those long months. Greene said he focused his renovation plans through the eyes of a parent.

It didn’t end with adding beds for tired parents. The company designed a full bathroom with a shower in every room based off of Greene’s ideas. Greene advocated for a better family room. He enacted new standard procedures to filter particle impurities from job sites away from patients. He knew what to recommend for the project, because he experienced it firsthand.

“I think we are conscious of the arena that we are working in,’’ Greene said. “Because you don’t want to upset [patients] when they are going in for a test or are just coming out from getting a result from a test. You just always need to be really, really on your A game.’’

Greene Construction still takes on work for Boston Children’s Hospital, replacing four of its emergency generators in January and installing an infant MRI machine in November 2014.

“The greatest joy in life can be found with your family,’’ Greene said.

Greene said he’s trying to carry on Gabe’s legacy and values in the expanding business by taking to heart the experience, work ethic, and demeanor of all his employees — just as his father did before him.

Greene’s office, spacious with a mahogany desk and leather pull-out couch, is a shrine to his three loves: his family, his business, and his favorite hobby fishing. Family photographs and Crayola portraits line the walls around his desk. Fishing reels from his father serves as art for his sanctuary. Collectable toy trucks in a glass display case have been passed down through three generations of his family. 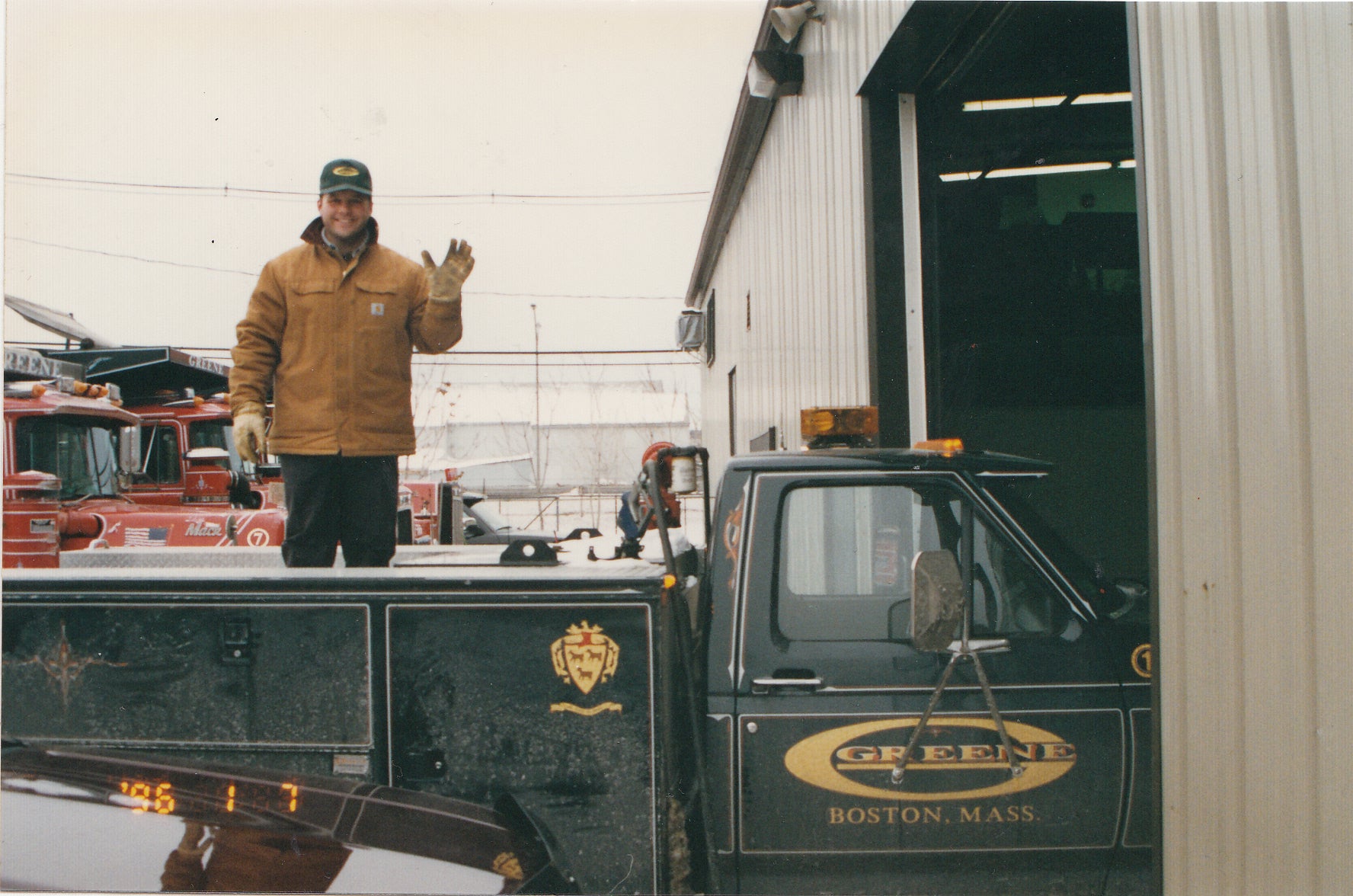 Growing up, Greene always knew he wanted to go into business with his father.

“In fourth grade, you are in class with all the other students and teachers, and they ask, ‘What do you want to do when you get older?’’’ Greene said. “And all my other friends wanted to play for the Red Sox, the Patriots, the Bruins… and I said, ‘I am going to work at my father’s construction company.’ There was never any doubt.’’

When he started at the company as a 15-year-old, his older sister drove him from lot to lot because, while he was old enough to operate a plow, Greene wasn’t yet old enough to drive a car to get there on his own. He was a laborer, jack hammering concrete at Children’s Hospital. He was a plow driver who would sit in his father’s office to warm up after a long snow storm, reminiscing with him about past fishing trips while splitting a row of Ritz crackers and peanut butter.

Now, he’s splitting the same snack with his own teenage children, Shelby and Bobby.

Much has changed since his father opened Greene Construction in 1966, but the love for family — blood or business — remains the same.

Both Shelby and Bobby spend time in the trucks and driving around to the different job sites with their dad. Bobby regularly shadows his father at the office, sitting contently in the corner chair closest to his dad’s desk anytime he’s not in school.

During weeknights, Greene, René and Bobby all cheer on Shelby, now a 17-year-old senior at Lincoln-Sudbury Regional High School, at her basketball games.

“I don’t think they have ever missed a game,’’ Shelby said. “I like knowing there are people always there supporting me.’’ 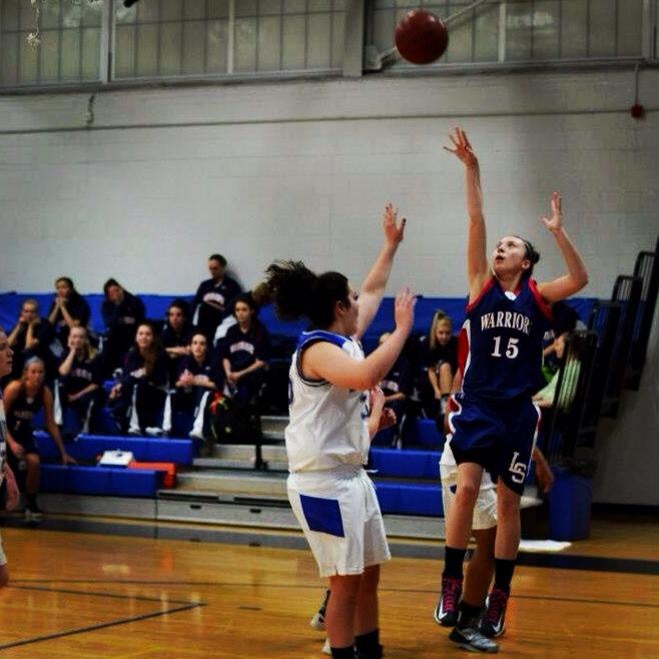 Shelby is a team captain for her high school basketball team, the Warriors.

Greene also shares his love of fishing with both of his kids.

“My dad and his dad would go on fishing trips all the time down the Cape and I know for a fact he just loved doing that with him and he loves doing that with us,’’ Shelby said.

Every year, Bob and Shelby take part in the Joe Cronin Memorial Fishing Tournament that raises money for the Jimmy Fund. Shelby won her division in the tournament in 2014.

Eighteen years ago, construction worker Dan Deverix received a life-changing phone call from his father who had started a new job at Greene Construction.

“Danny, you have to get with these guys. This is a company you’ll work for forever,’’ he said.

“My son just didn’t know what he wanted to do after high school, so I went up to Bob and asked if there were any spots for him. And he said tell him to come in tomorrow, no questions asked.’’

His son has now been working in the field under Tim Connaughton, field operation manager, for over a year.

Connaughton grew up at the company with Greene. He’s worked at Greene Construction since 1984.

“It’s a camaraderie because we have worked so long together, so we are not just workers together, we are friends together too,’’ Connaughton said. “And we care about each other. These guys are my family.’’

That sentiment is echoed by everyone at the company. About a quarter of the employees at Greene Construction have worked there for over 20 years. Many of Greene’s foreman have been at the company for nearly 30 years.

Pat Clarke, a construction supervisor for 28 years who oversaw the MRI project, said the combination of the challenging work and the approachability of Greene have kept him with Greene Construction for so many years.

“When Gabe and Bob speak, they would say, ‘We are all family, we all have to get along together and have fun,’ and that is how the whole Greene family speaks. It is all inclusive. It is ‘we,’ ‘us,’’’ Pat said.

Greene has also worked with Adria Ferragamo, the vice president of business development, for 22 years. Ferragamo, jokingly referred to by Greene as his “work wife,’’ said the two became close because they’ve both grown in their positions together through the years. Ferragamo said Greene’s caring personality has also bonded the two.

“Even when things weren’t great in the economy, he didn’t lay people off,’’ Ferragamo said. He cut in other areas, so he wouldn’t have to do that, and that is the type of person he is.’’

It’s a family business, even for the employees whose names aren’t on the trucks.

Shelby said she always had an interest in the family business, even joking in middle school she would one day be president of Greene Construction — but would save her younger brother a spot somewhere in the company.

That works for Greene, but he said he inherited something more important from his dad than the family business.

“All I want my kids to have is a work ethic. They can do whatever they want to do; they don’t have to do what I do,’’ Greene said, “but no matter what they do, have work ethic like my dad taught me.’’ 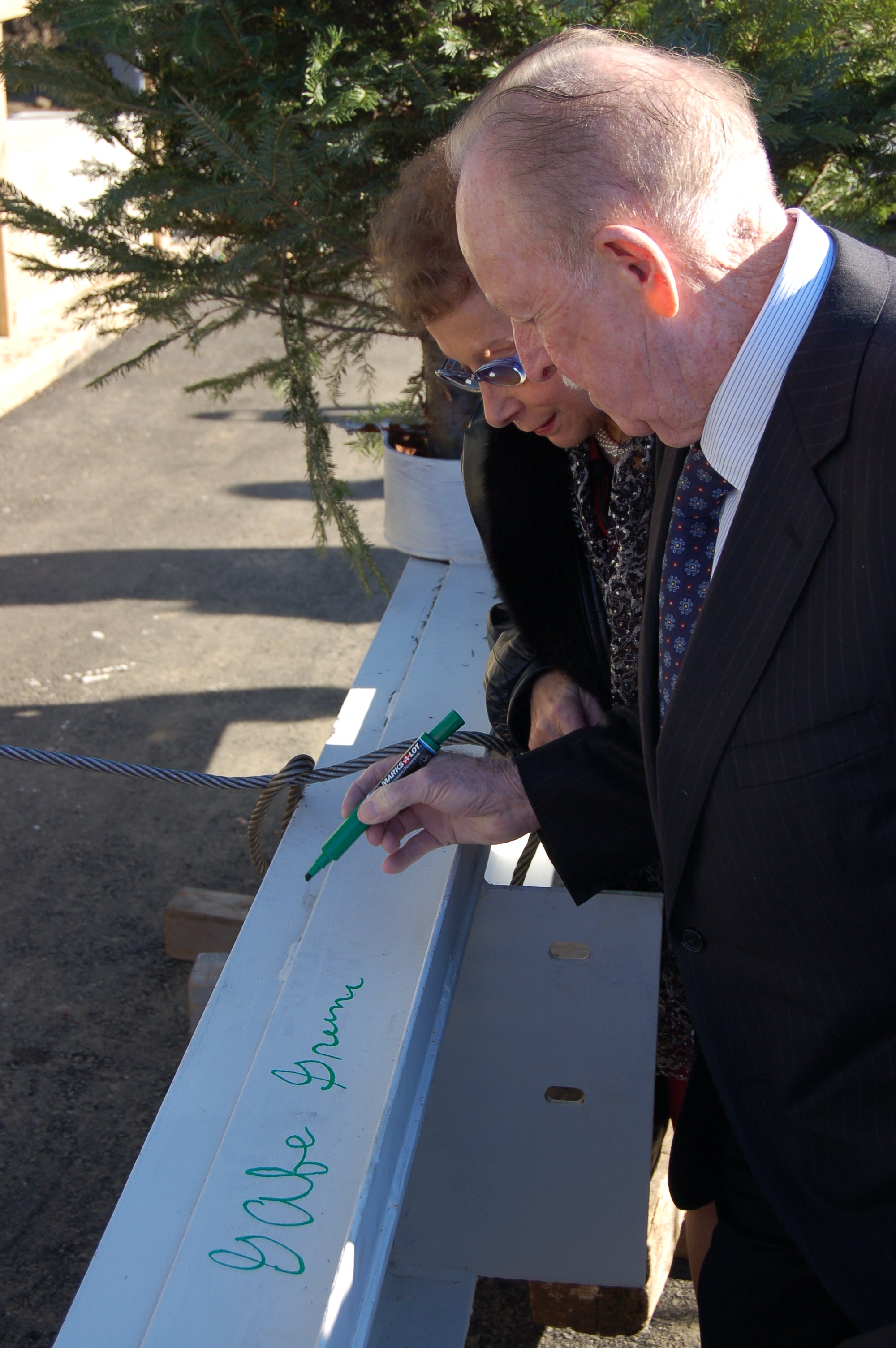 Gabe Greene signing a beam first at a topping off ceremony for Greene Construction in 2006.