Casino magnate Steve Wynn would like to get together with Somerville Mayor Joe Curtatone, whose legal challenges are the only thing delaying Wynn’s $2 billion resort in the neighboring city of Everett.

“How about we get lunch?” was Wynn’s message to Curtatone when asked by reporters, after a Wednesday speech to Boston College’s Chief Executives Club.

Wynn responded enthusiastically when asked whether he personally would meet with Curtatone, who opposed efforts to legalize casino gambling in Massachusetts.

“Sure,” he said. “And I will. Not would. I shall. How can I not? They’re neighbors, and you want to have — if you’ve got your head screwed on straight — a good cordial relationship with everybody, especially if it’s where your employees live. I think that’s a natural, wonderful thing to do.”

In February, when Wynn Resorts announced a delay in the planned spring groundbreaking due to Curtatone’s challenge of an environmental permit for the casino, a company official said such a meeting was unlikely.

It might be a while before Curtatone can get on Wynn’s calendar, however.

“I’m booked up because we open the Wynn Palace in Maucau … in several weeks,” he said. “By Labor Day, I’ll be open, and I’m going to spend more time in New England this fall.”

Somerville’s appeal of a state decision to give Wynn a license for waterfront construction was heard last week. A decision is expected later this summer. Ground can’t break on the project while the appeal is active.

Wynn said Wednesday that he’s confident the appeal will falter. He said that construction would last 34 months, and forecasted a spring 2019 opening for the resort — which would be about 4.5 years after the state’s gaming commission awarded the company its only Boston-area casino license.

Denise Taylor, a Somerville city spokeswoman, said “we haven’t heard anything yet” about a potential meeting with Wynn.

“But what the mayor has said many times before still stands: He would be happy to talk to anyone from Wynn willing to have a constructive conversation about Somerville’s concerns,” she said.

In addition to the appeal, Somerville has open lawsuits challenging the casino.

Wynn officials and Curtatone have disagreed about the nature of their interactions. Curtatone says his door is open for a meeting. Wynn officials have said they’ve tried to meet. Curtatone has said they wanted to talk about casino job fairs for Somerville residents, but not the city’s principle concerns of traffic caused by the nearby resort.

Prior to filing the environmental appeal, Curtatone did meet with Wynn’s lobbyists, The Boston Globe reported in February. At the meeting, Curtatone suggested Wynn could put up more money to address the city’s concerns, according to the Globe — a point Curtatone didn’t dispute.

Wynn has previously said there is “zero” chance Somerville would get more money from the company. And on Wednesday, he said he didn’t think finances were at the center of Curtatone’s problem.

“I don’t think the mayor of Somerville is looking for more money, for example,” Wynn said. “I don’t think that’s his issue. … I think he’s morally a non-gaming type of person.”

Curtatone has repeatedly denied that motivation, saying he acknowledges his efforts to kill expanded gaming in Massachusetts failed in a 2014 referendum.

During his talk to Boston’s business leaders, Wynn lavishly described the planned casino as an “urban, destination grand hotel” that will transform Everett. But he noted that between his legal battles with Curtatone and his since-settled dispute with Boston Mayor Marty Walsh, it hasn’t been an easy go of it to this point.

“I tell you, the cost of entry in Massachusetts is sky high,” he said, his voice rising in pitch. “We’re in [for] $250 million and we haven’t broken ground yet! People! It’s a very exclusive town.”

“We’ve made friends with everybody, except Joe Curtatone,” he added during the speech. “He’ll get over it, hopefully. Mayor Walsh and I are now on the best of terms.” 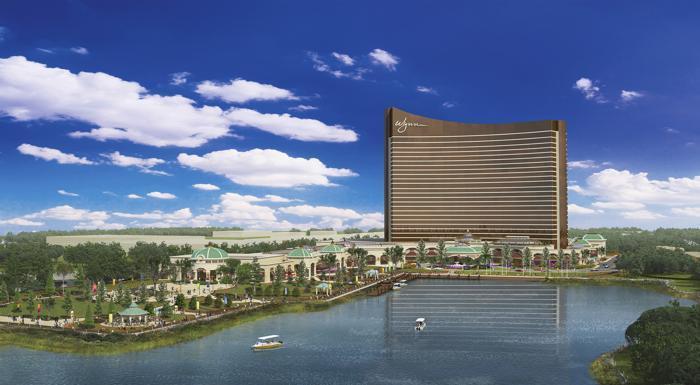 The fight over the Wynn casino, explained