The state Senate plans to unveil a new bill Thursday that would govern smartphone-enabled ride-for-hire services like Uber and Lyft.

Establishing laws for the burgeoning industry has been one of the highest profile state legislative issues this year. With the Senate bill, the issue is now rushing to a head.

The bill comes more than three months after the House passed a bill that Uber and Lyft decried as too restrictive, and that their competitors in the taxi and limo industries said was not restrictive enough. The Senate is expected to vote on its bill next week.

On Thursday morning, the Senate’s Ways and Means committee released a detailed description of the bill. The key takeaways:

1. It has a couple of key measures Uber and Lyft will like to see.

In both cases, Uber and Lyft already follow those would-be rules — and the Senate’s provisions are similar to those in more than 20 states that have passed light-touch “model legislation” advocated for by Uber and Lyft, the bill description suggests.

The bill passed by the Massachusetts House in March, which Uber and Lyft decried, allowed the companies to continue with their existing insurance policies, but included a state-run background check. Though Uber said it was open to the state conducting a secondary background check, it took issue with the process the House bill would require.

2. It allows Uber and Lyft access to the Boston Convention and Exhibition Center and (possibly) Logan Airport.

From the rider’s perspective, the House bill’s most controversial requirements banned most Uber and Lyft drivers from picking up riders at Logan Airport and the Boston Convention and Exhibition Center, giving cabs, limos, and other licensed livery vehicles exclusive pick-up domain at those locations for the next five years. The Senate’s version doesn’t include those provisions.

If the final law winds up looking like the Senate’s bill, riders could still snag rides at the convention center as they can today.

That’s not quite the case at Logan, though, where the vast majority of Uber and Lyft drivers  are already banned from picking up riders. Airport regulations will need adjusting in order for that to change — but since the bill’s language doesn’t include the airport ban, changing the regulations would be easier.

3. The companies may be less celebratory about certain parts of the bill.

For instance, Uber, Lyft, and other ride-hail services would need to pay a 10-cent fee on every ride delivered, which would be distributed to the cities and towns based on the number of rides that originate there. The cities and towns could only spend the money on transportation-related measures.

Ride-hail companies would also be required to add a tipping function to their apps. Lyft already has one, but Uber does not. However, the company recently agreed through a legal settlement to allow their drivers to let riders know that they can tip in cash.

The Senate and House bills both ban the companies from implementing “surge pricing” — the practice of lifting base fares during peaks of heavy demand — during states of emergency.

4. It will need to be reconciled with the controversial House bill.

Should the Senate pass its version of the bill, the two chambers will have about a month to iron out their differences before the two-year legislative session ends on July 31.

The House and Senate are in agreement on some points, though. Both bills would see a new division within the Department of Public Utilities oversee the industry. Both would require drivers to keep decals on their cars while offering rides through the companies. Both would require the new DPU division to ensure riders with disabilities are accommodated, and ban Uber and Lyft from imposing additional fees on those riders.

Even though Uber and Lyft thought the House bill was too restrictive, and even though it included provisions meant to assist traditional livery services, taxi and limo companies complained that it did not regulate their digital-era competitors tightly enough. So the new Senate bill, with its lighter touch on Uber and Lyft, has really stoked their anger.

“The Senate language falls woefully short on so many levels. They are jeopardizing jobs, taxes and the very livelihoods of an entire industry. To cast a blind eye to the taxi and livery industry and allow [transportation network companies] to operate with impunity borders on neglect,” said Scott Solombrino, a limo executive who has waged a campaign for stronger regulations on the newer ride-hail services.

Solombrino said industry officials will attempt to amend the bill before it comes up for a vote in the Senate. Taxi and limo companies have argued that Uber and Lyft drivers should face similar regulations to their services as a matter of fairness, since they essentially provide the same services — rides for hire. They want Uber and Lyft drivers to be forced to carry 24/7 commercial insurance and to undergo fingerprint-based background checks, even though taxi and limo drivers are not fingerprinted in most parts of the state. 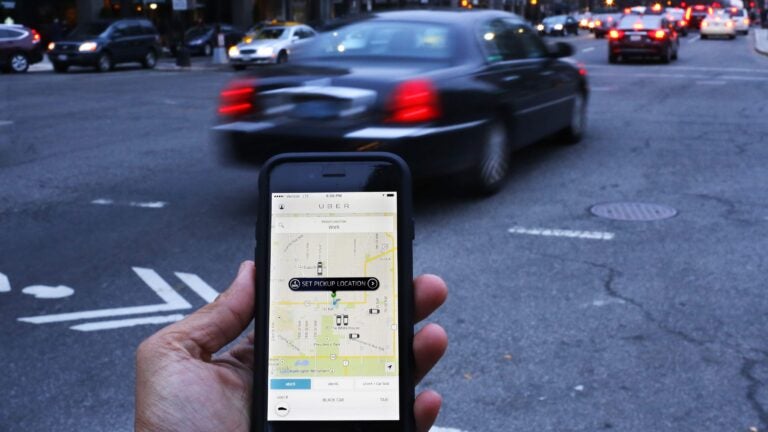