Empowered by a judge’s decision in Boston earlier this year, a group representing the Cambridge taxi industry sued the city this week, challenging the way it regulates cab companies while letting services like Uber and Lyft operate unabated.

The Cambridge Taxi Drivers and Owners Association is represented by Braintree attorney Jenifer Pinkham. Pinkham is also representing taxi companies in a similar lawsuit against the city of Boston. That group saw a favorable ruling earlier this year, when Judge Nathaniel Gorton refused to dismiss the action.

In Boston, Gorton said the cab industry had a reasonable claim that its equal protection rights were being violated because the city regulated taxi companies but not Uber and Lyft. Gorton seemed skeptical that the new-age services are really any different from the traditional taxi industry and ordered the city to say how it would change its taxi laws within six months.

The Cambridge suit makes similar equal protection claims, and is also being presided over by Gorton. It argues that the so-called transportation network companies are essentially the same as taxi services — they offer rides to the public for a fee — and should therefore face similar regulations.

“The de facto taxi companies operate unlicensed taxi services in open violation of City law to which the City deliberately turned a blind eye,” it continues. “Requiring the TNCs to comply with the taxicab regulations … ensures the ‘same level playing field’ for all taxicab operators, regardless of whether the rides are being generated by telephone, hailing a taxicab on the street or use of an internet app-based system.

The complaint says the taxi companies have been financially harmed by the lost value of their city taxi licenses, called medallions.

In response to the lawsuit on Thursday, Lee Gianetti, director of communications for Cambridge, said the city’s licensing commission is already in the process of creating new regulations.

“We regret the taxi industry felt it had to take this course, especially after the conversations we have had with the taxi industry regarding this matter and our commitment to diligently work to make regulatory changes so that all transportation services are treated fairly,” Gianetti said. “The License Commission is committed to doing everything in its power to ensure that regulation of all such services will be done in an equitable manner and to ensure the public safety of all residents of and visitors to Cambridge.”

When Gorton allowed the Boston suit to proceed on equal protection grounds, some experts said the decision could have an unintended effect on taxi license owners. Rather than forcing cities to apply taxi industry laws to Uber and Lyft drivers, they said, it might actually cause cities and towns to scrap or temper taxi industry regulations — potentially rendering the owners’ medallions worthless.

“That is something that obviously the taxi industry is concerned about, but they’re more concerned about making sure there is fairness,” she said. “In order to accomplish that goal, we feel that filing a lawsuit is necessary.”

The suit comes as the state legislature works toward finalizing regulations on Uber and Lyft. Cab and livery companies have said different bills from the state’s House and Senate are both unfair to their industry.

Pinkham said that if a law governing Uber is ultimately enacted, the taxi groups in Massachusetts could add the state to the suits in the hope of declaring it unconstitutional.

“Even if the bill is passed, these are two industries that are not being regulated in the same manner, and that’s unconstitutional,” she said.

Pinkham said that states across the country have passed laws that are favorable to Uber and Lyft and unfair to cabs, which still face stiff city regulations. She said the courts represent a better environment for cabbies than the legislative and executive branches of government.

“Legislatively, they’ve taken the easy road,” she said. “While the taxi industry in the city of Cambridge has a 63-page document that it has to adhere to.”

Cambridge has twice in the last few years moved toward more tightly regulating Uber and Lyft. However, the city abandoned the plans both times amid push back. Most recently, in 2014, riders and drivers overwhelmed a crowded licensing board room and sharply decried the proposed regulations. They were then shelved.

Boston is not the only city to have seen a judge show sympathy to this argument by taxi companies. In Chicago, a federal judge let a lawsuit proceed along similar lines. Pinkham said other equal protection complaints have been filed across the country, and that she is working with lawyers representing the taxi groups across the country. She said there are no standing plans to file any other similar suits in Massachusetts. 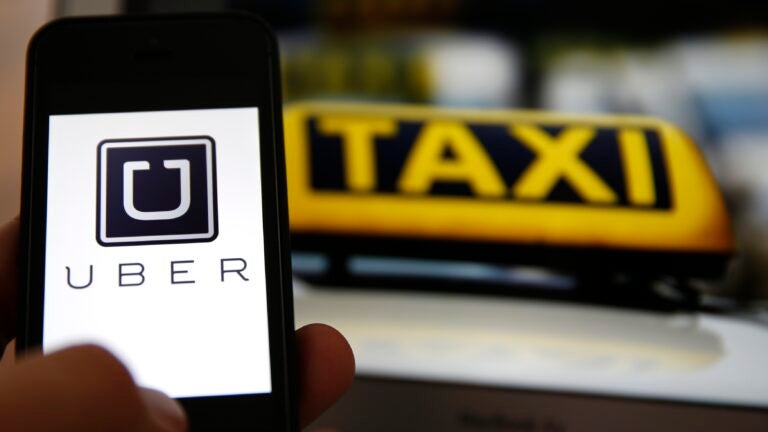