The ownership of the New England Patriots pushed for a merger between the two biggest brands in the daily fantasy sports industry before the two competing companies saw their explosive growth collapse last fall, according to ESPN.

A report from the sports media giant’s Outside the Lines investigative unit says that Jonathan Kraft, president of the Kraft Group, which owns the Patriots, urged Boston-based DraftKings to explore a merger with New York’s FanDuel in early 2015.

The Krafts are investors in DraftKings and, at Kraft’s suggestion, DraftKings CEO Jason Robins brought up the idea of joining forces with his counterpart at FanDuel over dinner in Las Vegas last January, according to the report. However, the proposal never made it past the idea stage, due in part to animosity between Robins and FanDuel CEO Nigel Eccles, the report says.

Speculation has long mounted over the possibility of a DraftKings-FanDuel merger, as the two companies offer very similar games in a very similar format, allowing paying users to win money based on the single-day (or, in football, single-week) performances of real-life athletes. They differ from traditional fantasy sports, in which success is usually determined over the course of a full sports season.

Both companies have long denied a possible consolidation, but there has been some smoke in recent months, including reports from multiple outlets in June that the two sides were discussing a deal. The ESPN report further fanned the flames, saying merger talks were “renewed this summer” and that industry experts believe “a merger is inevitable — after the upcoming NFL season, if not sooner.”

Some industry onlookers and legal experts, however, have questioned whether a merger from daily fantasy’s two most recognizable brands would withstand antitrust scrutiny.

The Kraft anecdote is a small piece in a long ESPN report examining the industry’s rise and its tumultuous last year. Casting the two companies as recklessly hyper-competitive, the article suggests they brought heavy scrutiny on themselves last year when — amid a massive advertising push aligned with the start of the NFL season — state and federal officials cast suspicion on the legality of the games.

Concerns about whether the games are a form of illicit gambling, and separate questions over whether they adequately protected consumers, led to significant political, media and legal backlash last autumn. That, in turn, led to massive cuts in the two venture-funded companies’ valuations.

Robins has in the past said that despite the controversy it invited, last year’s advertising blitz ultimately helped DraftKings build its user base. But he told ESPN that he regretted the content of the ads, which focused primarily on winning money.

“I think we did ourselves and did the industry a disservice,” Robins said. “That was a mistake. … It made us come across more like used-car salesmen and less like we have a great luxury automobile here that you’re really going to enjoy.”

Since last year’s controversy, the daily fantasy companies have pushed for regulations that stress their games’ legality in various states. In Massachusetts, Attorney General Maura Healey drafted rules that set standards the games must follow, and the legislature specified this summer that the games are legal as long as they adhere to Healey’s regulations. However, the games look likely to be subject to further legislation — and possible taxation — in the two-year legislative session that begins next January.

You can read the full Outside the Lines report here. 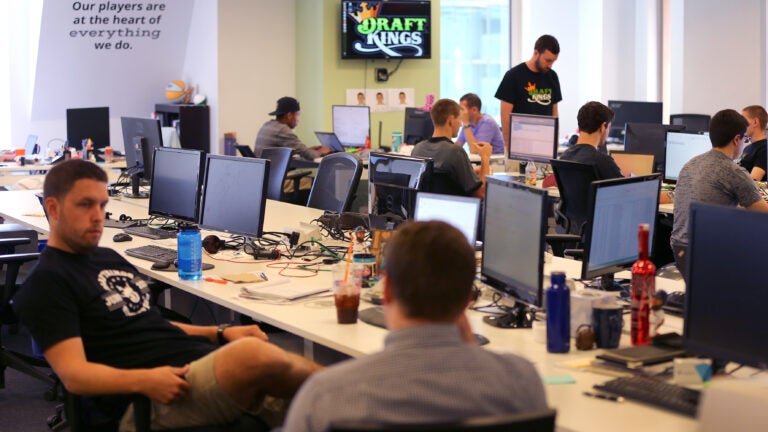