In the wake of the #MeToo movement, Gillette is invoking its classic tagline to call upon men to hold each other accountable and set better examples for the “men of tomorrow.” And they’re catching criticism for doing so.

The Boston-based shaving company, which is owned by Procter & Gamble, unveiled a new marketing campaign Monday seeking to eliminate bad behavior and justifications like “boys will be boys,” acknowledging that “the actions of the few can taint the reputation of the many.”

In an ad titled “We Believe,” — which begins by depicting news coverage and mainstream portrayals of sexual harassment, bullying, and other forms of “toxic masculinity” — a narrator says that such behavior has “been going on far too long.”

“We can’t laugh it off,” the voice-over says. “Making the same old excuses. But something finally changed. And there will be no going back.”

The ad then shifts to show men acting “the right way,” such as confronting sexual harassment or stepping in to stop a bully. It even includes footage of former NFL player, actor, and Proctor and Gamble spokesman Terry Crews testifying before Congress last June in support of a sexual assault bill.

“Some already are, in ways big and small,” the voice-over continues. “But some is not enough. Because the boys watching today will be the men of tomorrow.” 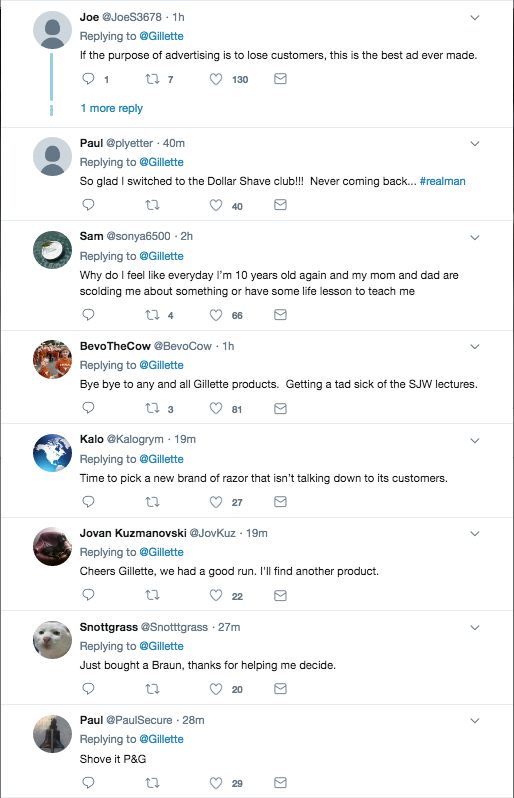 After being posted on Gillette’s Twitter account Monday morning, the ad was met with a torrent of hundreds of overwhelmingly negative comments, including from the usual suspects. Some complained that the ad was portraying all men as bad actors, accusing the company of “propaganda” and “contempt.” Many pledged to boycott Gillette in favor of other shaving companies.

“Your name might be on my football stadium, but you just kissed my business goodbye,” a Twitter user (and apparent New England Patriots fan) wrote. “Boys are not monsters-in-waiting. Period.”

“This commercial is awful,” said another. “It is dripping with contempt for men and upholds ridiculous [stereotypes].”

However, as the ad picked up more traction Monday afternoon, it also received a good amount of positive feedback.

“Kudos to @Gillette for taking this topic head on,” wrote one Twitter user. “As a mother of 4 men, I believe we can raise our boys to be great men who care about each other & humanity. This brought tears to my eyes – well done.”

The initial wave of criticism also prompted another user to thank “all the men replying negatively to this message for providing us a list of names to avoid in the future!”

Gillete: *showing a video about how men can and should be better*

Pankaj Bhalla, Gillette’s brand director for North America, told Boston.com in a statement responding to the mixed feedback that the company felt “compelled” to address “an important conversation.”

“We are taking a realistic look at what’s happening today, and aiming to inspire change by acknowledging that the old saying ‘Boys Will Be Boys’ is not an excuse,” Bhalla said. “We want to hold ourselves to a higher standard, and hope all the men we serve will come along on that journey to find our ‘best’ together.”

Gillette says it will begin reviewing all “public-facing content” and ads to make sure they “fully reflect the ideals of Respect, Accountability and Role Modeling.” The company also plans to donate a total of $3 million over the next three years to United States nonprofits “designed to help men of all ages achieve their personal ‘best.'” Their first partner in the campaign is The Boys & Girls Clubs of America.

Gary Coombe, the president of Proctor and Gamble’s grooming business, said in a statement that the company hopes to help “deliver positive change that will matter for years to come.”

“As the world’s largest marketer to men, we knew that joining the dialogue on ‘Modern Manhood’ would mean changing how we think about and portray men at every turn,” Coombe said, adding that the decision was an “easy choice.” 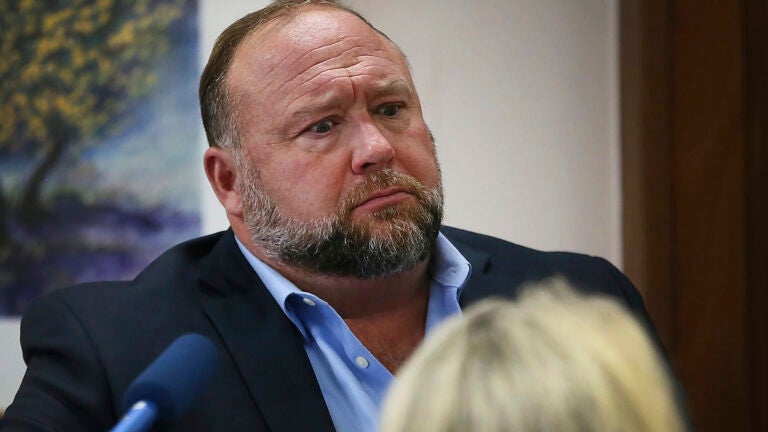