It was a quiet afternoon on Charles Street, and Jennifer Hill, owner of the Blackstone’s of Beacon Hill gift shop, was preparing for the annual day-after-Christmas tradition: the beginning of return season. Only this year, Hill wasn’t taking back items just from her own customers. On Thursday, she took back garments from clothing site Everlane, a dress from online fashion boutique Revolve, and a sweat shirt from Web-based menswear outfitter Huckberry.

Blackstone’s doesn’t sell any of those company’s products. But for the past 18 months, Hill’s store has served as a hub for customers who don’t want the hassle of boxing and shipping their returns from various online brands. Hill says the additional foot traffic generates new customers.

Call it the package paradox: Consumers love to shop online, but when it comes to returning purchases, 80 percent of shoppers still prefer to take their unwanted stuff back to a physical location, according to a survey from the National Retail Federation. That’s led to the rise of some unexpected alliances in this digital age, as online sellers are increasingly teaming up with brick-and-mortar storefronts to make the return process less painful for shoppers.

Kohl’s has allowed Amazon shoppers to return purchases in 100 of its stores since 2017, and this year the two companies expanded the program to all Kohl’s locations nationwide. This past summer, Walgreens and Nordstrom announced they would accept returns of online purchases from more than 30 brands, including Urban Outfitters, Cole Haan, and Levis. And UPS is now offering package returns and pick-ups at more than 12,000 CVS, Michaels, and Advance Auto Parts stores across the country.

The click-then-return-to-bricks concept offers a more convenient, streamlined option for e-commerce retailers that often bear the costs of shipping items both ways when a purchase doesn’t work out. And for physical retailers, it’s a way to remind shoppers about the wonders of buying things in person. Hill, who has been offering return services for online brands through a partnership with the Los Angeles-based startup Happy Returns, gets a nominal fee for offering the service, and offers first-time Happy Returns customers a 10 percent discount when they come to her store.

“It’s a way for us to meet new customers, or to get a local who doesn’t come in regularly to come back,’’ she said.

This year’s holiday season saw record growth in e-commerce sales — up 18.8 percent over last year, according to Mastercard’s SpendingPulse report. But shoppers are expected to return $41.6 billion worth of online merchandise this year, according to a study commissioned by commercial real estate services firm CBRE and Optoro, which helps retailers process returns. Optoro said returns account for $50 billion in retail losses annually and generate 5 billion pounds of waste in US landfills each year.

For the indecisive online shopper, the now ubiquitous promise of free shipping, coupled with the practice of bracketing — ordering multiple sizes of a product to see which fits best — is contributing to the glut of returns. Narvar, which established the return partnerships for Nordstrom and Walgreens, said bracketing is on the rise, with 50 percent of respondents to a recent survey saying they had bought multiple sizes of products in the past year, up from 40 percent in 2017. It’s particularly popular among Gen Z and millennial shoppers.

Sierra Smith, 26, of Beacon Hill, often brackets when she shops online, and, as a result, she’s taken returns to Blackstone’s at least 15 times over the past year. On Thursday, as she returned jeans and a top from Everlane, she also did some shopping.

“I probably wouldn’t have ever gone into the store’’ before her return habit, Smith acknowledged. “But they have cute little gift ideas and knick-knacks. Today I bought some giant matches.’’

Edgar Dworsky, a Somerville-based consumer advocate, said the concept of in-store returns for online purchases made elsewhere is still new enough that it has the potential to confuse customers, citing his own struggles returning an Amazon purchase at Kohl’s on Thursday. And he noted that while retailers may be promoting easier exchanges and returns, many have been simultaneously paring back the time people have to make them.

“They may be touting easy returns, and whispering, ‘but you better do it quicker,’ ’’ he said.

But David Sobie, the cofounder of Happy Returns, said the in-store returns are gaining traction as more shoppers purchase from direct-to-consumer brands. He and his cofounder had the idea for creating “return bars’’ in storefronts such as Blackstone’s after HauteLook, the online flash-sale site where they worked, was acquired by Nordstrom and began offering in-person returns at Nordstrom Rack stores.

The startup’s goal is to “reconnect digital retail with physical retail and provide a valuable service for both parties,’’ he said, and to remove the frustrating “arts and crafts’’ project that consumers have to take on when it comes to boxing up their returns.

“We joke that tape is a four-letter word,’’ Sobie said.

Happy Returns launched its first return bars in Simon Malls in 2016 and now has more than 700 locations across the country, having recently formed partnerships with Paper Source and Cost Plus World Market. Shoppers can return items from 40 different brands — including Rothy’s, Untuckit, and Draper James — without having to repack them, Sobie said. And many consumers appreciate that the company uses reusable totes to eliminate cardboard in all of its return shipments.

And because Happy Returns expedites the return process, it means customers can get the credit back on their cards within hours.

Sobie said the quick refunds lead to “a mind shift’’ that favors the brick-and-mortar retailers, as shoppers think: “I just got money back on my credit card, maybe now I’ll look around and find something that delights me.’’

That’s at least part of the reason that Kaitlyn McDonough, 27, makes the 10-minute hike uphill from her home to Blackstone’s to return her purchases from Revolve. McDonough said she has the option of dropping off packages in the lobby of her building, but likes getting the money back quickly.

“I just know, all right, I got it back,’’ McDonough said. And that means she can go back to online shopping.

Visit Drink in Fort Point now has a cocktail menu. Here's why 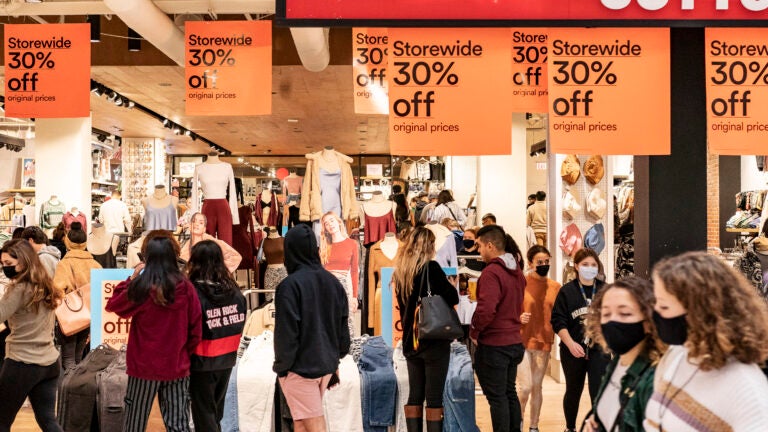 'Buy now, pay later' catches on just in time for the holidays