Anyone who has ventured into a local supermarket lately, or who has at least been on social media over the last few days, has probably seen the supermarket photos.

The novel coronavirus has apparently touched a nerve with the public that has sent the masses to the supermarket in throngs, reminiscent of a Nor’easter or, perhaps, something more dystopian: a Hunger Games-esque mission to survive.

But they’re not just buying the anticipated cleaning products and paper towels. They’re also buying toilet paper. And New Englanders aren’t the only ones panic buying toilet paper; it’s reportedly happening throughout the country and elsewhere.

There’s a reason for it, according to a Boston University professor, and it has to do with a thing called “zero risk bias.”

“When faced with an uncertain situation, people feel better if they can eliminate one risk,” Dr. Jay Zagorsky, a senior lecturer with BU’s Questrom School of Business, said in an email to Boston.com. “Bulk buying toilet paper eliminates the small risk of running out if quarantined. People might not be able to eliminate the risk of catching coronavirus but they can eliminate the risk of running out of toilet paper, which makes most people feel they have some control in this very uncertain situation.”

Zagorsky detailed the phenomenon in a recent piece for The Conversation. He said this also isn’t the first time TP has been a most-sought-after commodity. It happened in the U.S. in 1973 when people were already afraid of losing other things, like electricity or gas. The government warned of a potential toilet paper shortage, but panic didn’t ensue until Johnny Carson made a joke about it on television, tipping off a panic to hoard rolls upon rolls.

Market Basket took to Facebook to ensure that customers know all of it stores will remain open, in an effort “to clear up any confusion.”

That post was riddled with comments asking about the toilet paper situation, along with positive comments and observations at various stores.

“What’s the Toilet Paper situation look like?” asked a Facebook user identified as Adam Wolff. “Asking for a friend.”

The company replied to say that customers would have to check with individual stores to see what they have for inventory.

There were other similar comments, and replies from Market Basket.

“Do you have toilet paper because it’s become extinct at Walmart stores,” wrote Facebook user Lynne A. Meadows.

‘Definitely something I’ve never seen before’ 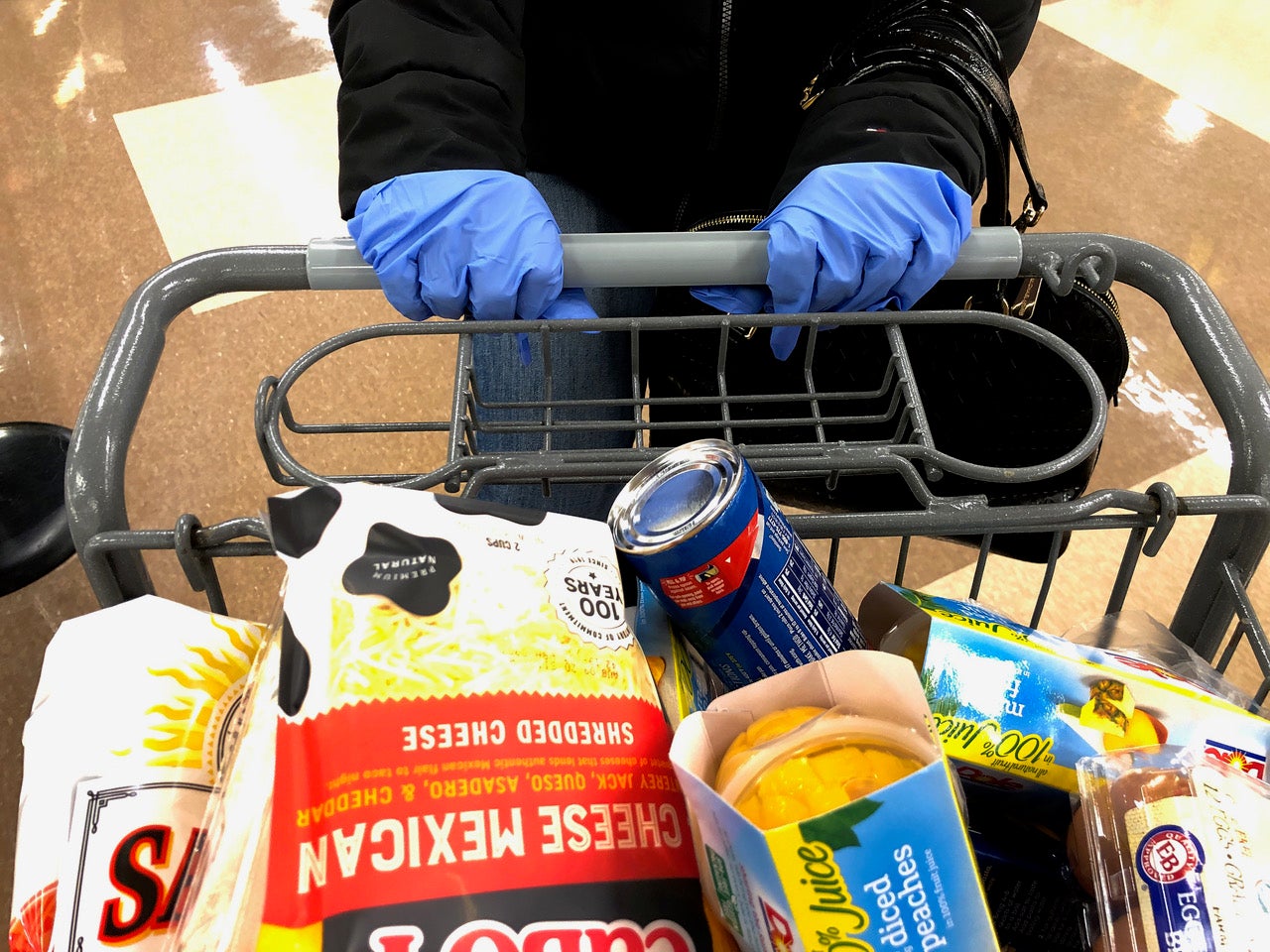 A customer wears gloves while shopping at a supermarket in Saugus Friday.

When asked if he’s ever experienced anything like the pandemic panic hordes, Roche Brothers Vice President Arthur Ackles replied, “Never.”

“We have obviously really busy days, things like Christmas or snowstorms, but those are usually one or two days at peak, and then die down for a few days,” he said. “It’s definitely something I’ve never seen before.”

Ackles said sales began to climb at his Wellesley-based supermarket chain about a week ago, up 7 or 8 percent. This past weekend was a bit busier and toward the end of this week, sales are up between 200 and 300 percent.

The increases are in “all the obvious” areas. Yes, toilet paper is one of them, but also hand sanitizers and other paper-aisle items.

“Now customers are starting to work their way through frozen foods, like frozen pizzas, things like that they can pile up on and freeze as well,” Ackles said.

Roche Brothers had some toilet paper and paper towels on Friday, but Ackles said “it probably won’t make it through the day.”

“And I don’t know if the next shipment is going to have any, so it’s kind of intermittent, I would say, at best,” he said.

At Market Basket, there’s more workers on the schedule, but Joe Schmidt, supervisor of operations, said customer traffic is more like that of a busy weekend.

“Definitely the paper commodities seem to be the one that we’re selling rapidly,” he said. The company’s deliveries to stores have been on time, and stores are focused on keeping shelves stocked.

“We’re just thankful for our customers,” he said.

At Stop & Shop, there’s a limit of five items per customer on higher demand things, according to a statement emailed to Boston.com.

“Due to product availability — and to ensure more customers can access products that they need — Stop & Shop has placed a purchase limit on high-demand items like hand sanitizer, Lysol wipes, toilet paper, etc,” the email said. “There is a limit of 5 of these items per customer.”

Wegmans has also instituted limits on items. For toilet paper, customers can only buy one family package per purchase. Disinfecting wipes are two per purchase, and hand sanitizers and things like hydrogen peroxide or rubbing alcohol are at a limit of three. Gallons of Wegmans brand water are at four per purchase, a news release says.

“Customers are stocking up on paper products, cleaning supplies and a variety of shelf-stable food items,” Wegmans said in the release. “As demand for these items continues to grow and supply remains limited, we’re working with our current suppliers and pursuing additional sources to replenish our supply. We’re also seeing an increase in our e-commerce business and expect that demand will continue to grow.” Marin Tillberg, 5, had enough of waiting in the long lines at Market Basket in Waltham Friday.

Vivek Sankaran, president and CEO of Albertson Companies, the parent of Shaw’s and Star Market, asked customers to respect the limits in a letter to customers.

“In many markets, we are asking customers to respect quantity limits of select, high-demand items (like hand sanitizers and household cleaners) to help ensure more of our neighbors can find the products they need. We’re refilling high-demand products as quickly as we can,” Sankaran said in the letter.

Target also intends to limit high-demand items beginning this weekend, Chairman and CEO Brian Cornwell said in a letter to the community.

Cleanliness is also on the minds of those in the business. Ackles said cleaning that used to occur once or twice a day has been stepped up to four or five times a day. Workers have been given guidelines for themselves while working. Roche Brothers also shut down its salad, food, and olive bars as a precaution.

Overall, Ackles noted that the country is in uncharted territory.

Live updates: The latest coronavirus news from around New England