WASHINGTON – When Sen. Lindsey Graham, R-S.C., called President Donald Trump last Sunday, he delivered a blunt message: If you reopen the nation’s economy too early against the advice of public-health experts, you will own the deaths from the novel coronavirus that follow.

Trump’s stalwart ally also warned that the president wouldn’t be the only one held responsible. Graham said the Republican Party itself risks being defined ahead of this fall’s elections as prioritizing commerce and the stock market over the health and safety of the American people, according to three White House officials and a GOP lawmaker who spoke on the condition of anonymity to comment frankly.

Trump listened to Graham but made no promises, the officials said. Trump argued to the senator, as he later would in public, that Americans must get back to work and businesses need to reopen as quickly as possible.

“Our country wasn’t built to be shut down,” the president said at a news conference last Monday, opening five straight days of public declarations raising the specter of easing social-distancing guidelines and other restrictions by mid-April — a timeline that most experts studying the pandemic say is dangerously premature.

Graham’s private plea, which some of Trump’s advisers have echoed to the president, illustrates the political calculations underway inside the leadership ranks of the Republican Party as the president balances dual crises as he seeks reelection: the pandemic that is claiming lives and overburdening hospitals, and the resulting economic meltdown that already has left millions jobless, with many facing financial ruin.

The White House’s coronavirus task force, led by Vice President Mike Pence, is preparing to issue revised recommendations from the president to the public once the current 15-day guidelines expire Monday.

Trump said this week that he would like much of the country “opened up and raring to go” by Easter, which is April 12 – in part, he said, because he likes the imagery of church pews full for the holiday. Whether he follows through on that desire could be one of the most consequential decisions of his presidency.

The president is not technically the decider, however. The battle to reopen the country pits Trump against multiple governors, Democratic and Republican alike, who are scrambling to mitigate the impact of the coronavirus in their communities and marshal medical supplies for their hospitals. They will have the final say on when restaurants, stores and other gathering places in their states can reopen.

Ohio Gov. Mike DeWine, R, who moved early to confront the outbreak and was the first governor to order restaurants and bars closed, said in an interview, “People’s heads are now moving toward how we will open this back up. That is certainly something we’re looking at.” But, he added, “You’ve got to be ready for the surge that we know is coming.”

In other states across the country, the surge has arrived — and it is testing Trump’s belief that Easter is a reasonable target.

In New York, the center of the coronavirus in the United States, Gov. Andrew Cuomo, D, has emerged as a national leader during the pandemic as he has excoriated the federal response and pleaded with the administration to send more ventilators and other supplies and to be prudent about a resumption of normal life.

“If you ask the American people to choose between public health and the economy, then it’s no contest. No American is going to say, ‘Accelerate the economy at the cost of human life,'” Cuomo told reporters last week.

Trump has fostered a transactional dynamic — in which he insinuates that loyalty and praise could be helpful for states seeking federal help – that has unsettled governors looking for fair terms and clear guidance from the federal government, several gubernatorial aides said privately.

A growing uneasiness about Trump’s motives and leadership hovers over private conversations between governors, according to top Democrats and Republicans privy to the conversations. Even those who are Trump’s political allies are “never quite sure what he’ll do or if they can trust what they hear from Pence,” according to one adviser to a Republican governor who, like others interviewed for this story, spoke on the condition of anonymity to comment frankly.

Trump’s highly charged approach has prompted some governors to band together and discuss their own timelines for closures and other issues, with bipartisan and strong but under-the-radar partnerships driving many decisions.

“We’re all drinking out of a fire hose, but they’ve really been leaning on one another and pulling together,” Maryland Gov. Larry Hogan, R, said in an interview. “There is texting and phone calls back and forth — and it’s not like, have your scheduler call my scheduler.”

This collective gubernatorial power could be a counterweight in the coming days if Trump continues to rally for a national reopening. But governors will also continue to lean on Trump for federal help — an imperative that New Jersey Gov. Phil Murphy, D, said would outweigh emerging tensions over reopening the economy, at least for now.

“We can’t print money, and we don’t have anything close to the stockpiles the federal government has, so we need them,” Murphy said in an interview.

Some red-state governors have been more aggressive about keeping their economies humming.

In Florida, Gov. Ron DeSantis, R, was far slower than other big-state governors to order restrictions, and he refused to close beaches this month to spring break revelers.

And in Mississippi, Gov. Tate Reeves, R, issued an executive order classifying most businesses in the state as “essential,” thereby exempting them from any shutdown orders that cities and counties issue.

“Mississippi’s never going to be China,” Reeves said — even as neighboring Louisiana has recorded one of the highest surges in coronavirus cases. Louisiana Gov. John Bel Edwards, D, has warned that the number of patients will soon exceed the state’s treatment capacity.

Trump has said that his “first priority” is the health and safety of the American people and that his decision about what to recommend will be guided by the medical experts on his team. “We will be using data to recommend new protocols to allow local economies to cautiously resume their activity at the appropriate time,” the president said Tuesday.

Yet in private discussions, the president has been driven much more by economic concerns, according to people involved in internal debates or briefed on them. Trump has long viewed the stock market as a barometer for his own reelection hopes, and he has been distraught at the meltdown in recent weeks. He has been inundated with calls from business leaders, wealthy supporters and conservative allies urging him to get Americans back to work and stave off further calamity, even if doing so carries health risks.

“There’s a fatalism that no matter what he does, he’s going to get blamed by half of the country,” said a former senior administration official with knowledge of Trump’s thinking. “If there is something he has some measure of control over, which is the economy, why not potentially try to take action? Yes, there will be a death toll, and he’ll get blamed one way or another, but in all likelihood, whether he gets reelected or not will depend on where the economy is and where people’s perceptions of the economy are six months from now. That’s where he is primarily focused.”

Former Pennsylvania Gov. Ed Rendell, D, said Trump is “overreacting terribly” to economic concerns by suggesting a premature return to normal when he ought to be focused entirely on mitigating the spread of the coronavirus.

“The thing he wanted most was to have a great economy. Boom, he’d win,” Rendell said. “It’s causing him to make a terrible error … If the virus doesn’t abate, he’ll be blamed for it, and it’ll be an utter disaster.”

It is far too soon to measure public approval of Trump’s management of the pandemic and draw meaningful conclusions about his reelection chances, but it is likely to be the main event on which he is judged by voters in November, according to political strategists.

Trump’s reliance on his gut instincts and his decision to put his grievances and skepticism of the federal government at the fore of his approach has alarmed many governors, who said they feel isolated as they respond to a global crisis.

“Sometimes it’s difficult to understand what the White House’s position is,” Wisconsin Gov. Tony Evers, D, said in an interview. “We had the president one time saying it’s a hoax; then a few weeks later, it’s really, really bad; then, let’s shoot for Easter.”

Evers said Wisconsinites seeking facts and guidance are turning instead to local leaders and institutions, such as the Archdiocese of Milwaukee, which has canceled Easter Sunday Masses despite the president’s desire for packed pews. Asked whether he would take his cue on when to reopen Wisconsin’s economy from the president, the governor said, “No.”

“There is a disconnect, and while the president is free to make any comments he wants to, it’s confusing to people — that’s the bottom line,” Evers said. “My health-care officials and scientists are telling me it’s still a big deal. They’ll make the decisions based on science. That’s what we’ll do here.”

It’s not as if governors are opposed to reopening the economy quickly. “I share that goal with the president,” Rhode Island Gov. Gina Raimondo, D, said in an interview.

In fact, Raimondo argued, governors are more in touch with the real-world consequences of the shutdown than is the president, who hears mostly from executives of large companies.

“We are the ones in our communities talking to the laid-off waitress stressed [about how] she’s going to take care of her children, talking to hospital workers worried if they will be safe,” Raimondo said.

As John Kasich, a former Republican governor of Ohio, put it, “When you’re governor, you realize you’re really the father or mother of the people inside of your state. You’re right there. You live with them. You see them. You hear from them.”

Trump has been closely tracking what governors say in the media and has been quick to attack those he sees as critical of the federal response. He repeatedly has trashed Washington Gov. Jay Inslee, D, and Michigan Gov. Gretchen Whitmer, D, to name just two.

Whitmer and other governors said they are treading lightly with Trump and hoping to avoid his wrath. “I know that there is a sensitivity, sure,” Whitmer said in an interview.

“I have 10 million people in this state, and I need to be able to deliver on protecting them,” Whitmer said. “Working with the federal government is really important. I’ve never gone out of my way looking for a fight, and I’m certainly not doing that, because I need as much partnership and assistance from the federal government as I can get.”

“At the end of the day,” she added, “this isn’t a political fight. This is a fight to save lives.” 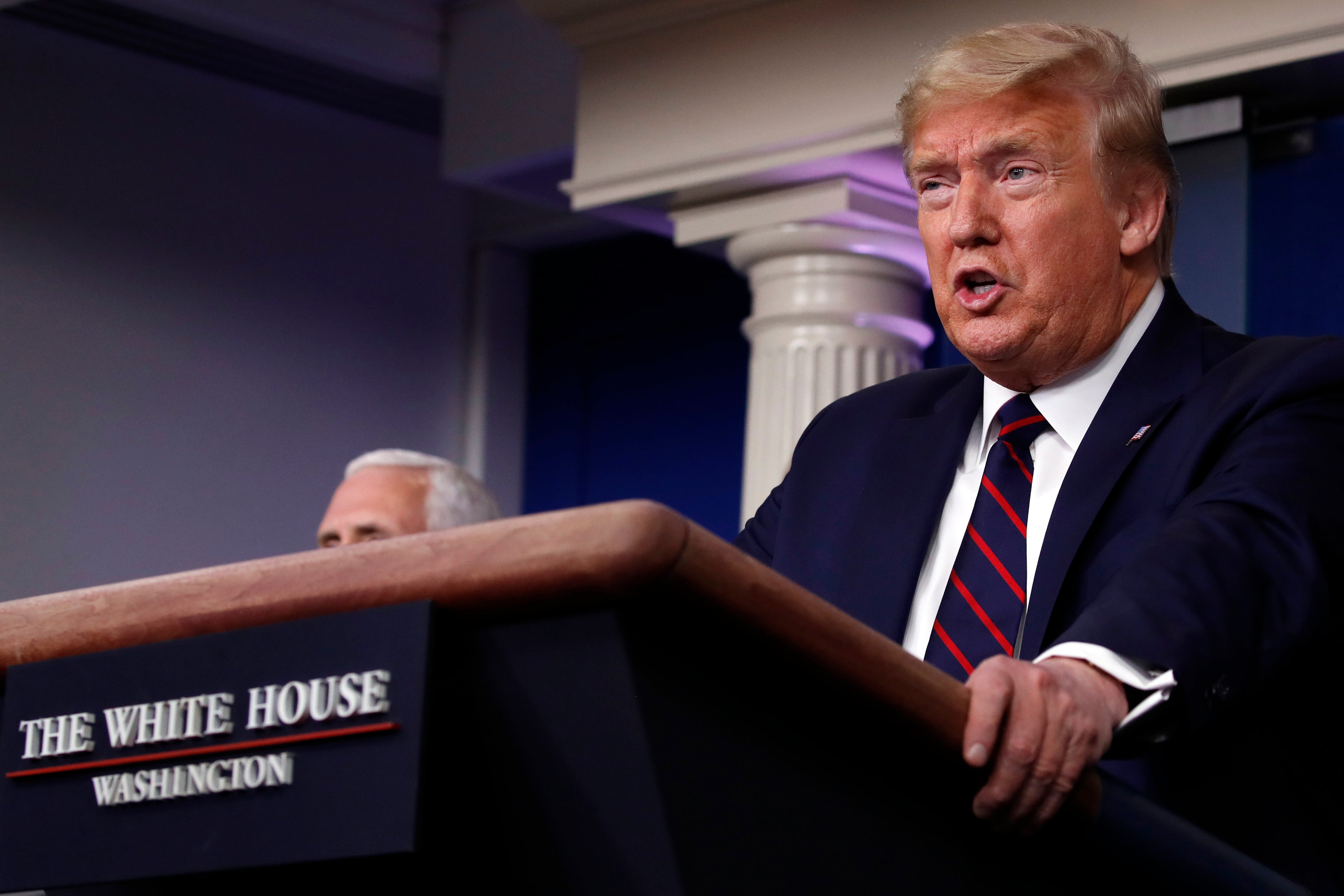