BOSTON (AP) — Sports daily fantasy and betting website DraftKings will debut as a publicly traded company Friday against a backdrop of a near-complete shutdown of athletic competition across the globe due to the coronavirus pandemic.

DraftKings’ move to Wall Street was sealed Thursday after shareholders of a blank-check company, Diamond Eagle Acquisition Corp., approved a merger. Blank check companies typically are publicly traded but have no operations of their own and aim to acquire or merge with others.

The two are also combining with sports gambling platform supplier SBTech. The new company will have an initial market value of $3.3 billion.

DraftKings co-founder and CEO Jason Robins will remain the head of the merged company. In a telephone interview with The Associated Press, Robins said he believes that the long-term outlook for sports gambling remains strong, and that the company may even benefit from pent-up fan enthusiasm when games return.

“I hope and believe that sports will come back and people will continue to have a strong appetite for sports,” Robins said. “If there is a trend away from being outdoors and going to the public places, you could actually see an increase in sports viewership once traditional sports are being played again. You could also see an increase in online activity.”

States with dwindling tax revenues could also turn to sports gambling as a source of funds, Robins said. Since the U.S. Supreme Court lifted a federal ban, 14 states have legalized sports betting in some format. DraftKings operates a sportsbook in eight of them, with its fantasy sports offerings available in 43 states in all.

Robins noted that the company’s digital nature also gives it an advantage in a future where social distancing is more prevalent.

“We don’t have a big brick and mortar presence, where a lot of our employees are literally not able to go into work,” he said.

The Boston-based company’s 950 employees have all transitioned to working from home, as has Robins. The only time he has gone into the office this month was to record a video for the “virtual bell-ringing” to accompany DraftKings’ debut on the Nasdaq market under the DKNG stock symbol.

The deal announced in December and finalized this week involves $304 million in institutional investments and a Diamond Eagle trust account that contained as much as $400 million. The combined company will have over $500 million of unrestricted cash, DraftKings said.

Robins said that the deal’s structure protected it from the stock market’s swoon triggered by the coronavirus pandemic. Diamond Eagle raised its money last May, and the institutional investments were committed in the fall.

“It’s a good structure given the environment,” he said. 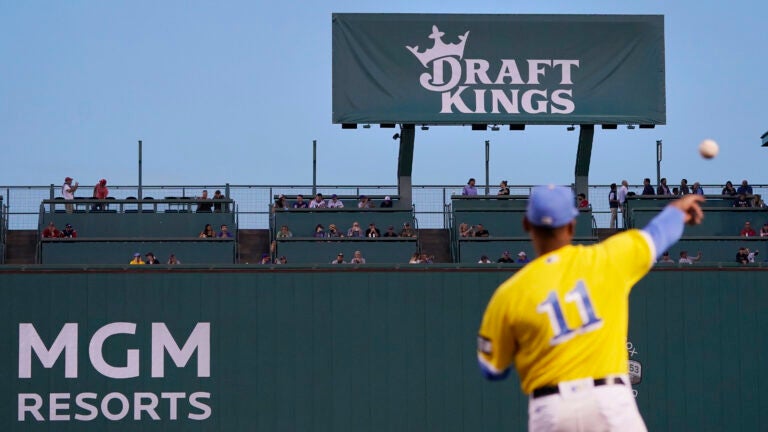