The directory map for the Northfield Square Mall in Bourbonnais, Illinois, has three glaring spaces where large department stores once stood. Soon there will be a fourth vacancy, now that J.C. Penney is liquidating stores after filing for bankruptcy.

With so much empty space and brick-and-mortar retail in the midst of seismic changes even before the pandemic hit, the mall’s owners have been talking with local officials about identifying a “higher and better use for the site,” though they have declined to elaborate on what that could be.

“Filling in one anchor space, generally, is doable,” said Elliot Nassim, president of Mason Asset Management, which co-owns the Northfield Square Mall and dozens of other enclosed shopping centers. “But once you get hit by two others and you’re dealing with three anchor closures, that’s usually where we become a little more likely to put it into the bucket of a redevelopment.”

The standard American mall — with its vast parking lots, escalators and air conditioning, and an atmosphere heavy on perfume samples and the scent of Mrs. Fields cookies — was built around department stores. But the pandemic has been devastating for the retail industry, and many of those stores are disappearing at a rapid clip. Some chains are unable to pay rent; and prominent department store chains, including Neiman Marcus, have filed for bankruptcy protection. As they close stores, it could cause other tenants to abandon malls at the same time as large specialty chains like Victoria’s Secret are shrinking.

Malls were already facing pressure from online shopping, but analysts now say that hundreds are at risk of closing in the next five years. That has the potential to reshape the suburbs, with many communities already debating whether abandoned malls can be turned into local markets, office space or even affordable housing.

“More companies have gone bankrupt than any of us have ever expected, and I do believe that will accelerate as we move through 2020, unfortunately,” said Deborah Weinswig, founder of Coresight Research, an advisory and research firm that specializes in retail and technology. “And then those who haven’t gone bankrupt are using this as an opportunity to clean up their real estate.”

Weinswig said the malls that are able to withstand the current turmoil will be healthier — better tenants, more inviting and occupied — but she anticipated that about 25% of the country’s nearly 1,200 malls were in danger.

Most retailers that have filed for bankruptcy are closing stores but plan to continue operating. 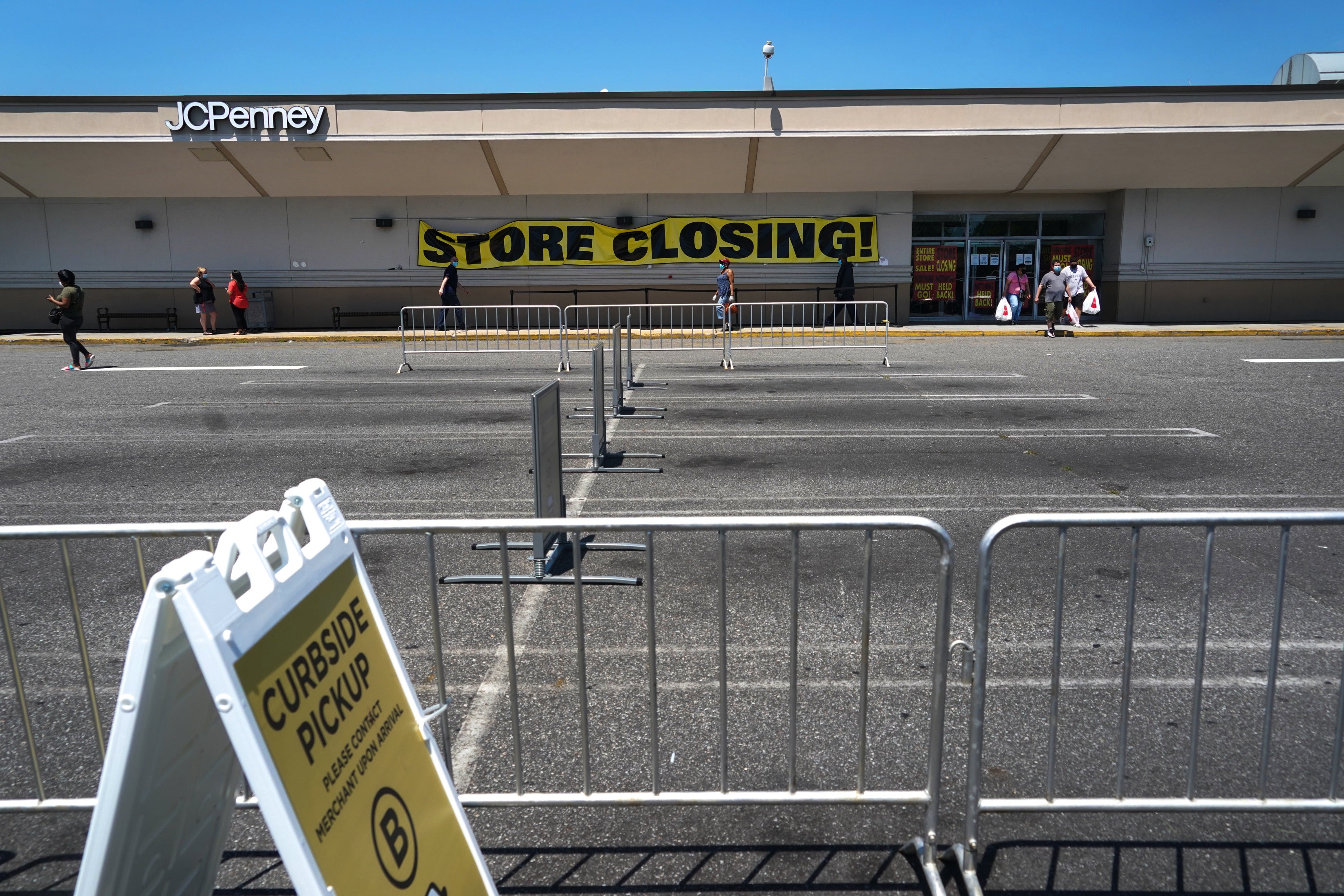 A J.C. Penney Co. store in South Valley Stream, N.Y., June 22, 2020, which is liquidating stores after filing for bankruptcy.

Department stores account for about 30% of the mall square footage in the United States, with 10% of that coming from Sears (which filed for bankruptcy in 2018) and J.C. Penney, according to Green Street Advisors, a real estate research firm. J.C. Penney, which declined to comment, has said store closings will start this summer and could eventually number as many as 250. Green Street forecast in April that more than half of all mall-based department stores would close by the end of 2021.

That will have significant effects beyond reduced customer foot traffic. Many small mall retailers have clauses in their leases — so-called co-tenancy clauses — that allow them to pay reduced rent or even break the lease if two or more anchor stores leave a location.

“At a lot of lower-quality malls — where maybe there already is a vacant anchor, where you’ve got the Sears box that closed two years ago and not yet filled it, and now your J.C. Penney box is closed — that is going to cause that mall to likely lose a lot of tenants and possibly even lose its competitive positioning very quickly,” said Vince Tibone, a retail analyst at Green Street.

Tibone said he was pessimistic about the ability of most malls to fill vacant spaces, especially during the pandemic. Entertainment options like Dave & Buster’s are off the table, for instance.

“The reality is, there are going to be dark boxes for some time,” he said.

And then there are customers, who already shop online in huge numbers and may not be all that eager to return to enclosed emporiums where they will be surrounded by other people.

“If there’s a perception out there that people are safer outside and less safe inside, that’s not great,” said Matthew Lazenby, chief executive of Whitman Family Development, which manages the luxury open-air Bal Harbour Shops outside Miami.

Even before the pandemic, U.S. shopping malls were seeing their fortunes diverge. While the ones in affluent areas with high-end stores and restaurants generally thrived, lower-tier malls, particularly those with competitors nearby, suffered over the years as retailers winnowed their physical stores and filed for bankruptcy. Macy’s, which also owns Bloomingdale’s, said in February that it would close 125 stores in “lower-tier malls” during the next three years; and Nordstrom just recently said it would close 16 of its 116 full-line department stores. While Neiman Marcus, which filed for bankruptcy in May, said it plans to reopen all its stores, landlords are watching warily.

Lazenby said that his mall was in a good position, but it, too, has been dealing with the decline of department stores. Barneys New York, which finished liquidating this year, was meant to anchor an expansion, and the mall also has a Neiman Marcus.

Brad Schlossman, chief executive of West Acres Development, where he oversees the popular West Acres mall in Fargo, North Dakota, which was founded by his father, said Sears was the mall’s first tenant, and it had a lease that, including renewal options, had a 45-year-term that ran out in 2017.

Since Sears exited, the mall has been trying to redevelop the space, installing a Best Buy and trying to attract restaurants, though those plans may be put on hold depending on which tenants are able to pay rent in the near future.

Schlossman is optimistic about West Acres, partly because it is the only major mall in an area where the weather favors enclosed spaces. But he anticipates greater struggles in places where there are clusters of malls. “We are it in our community, so we don’t have that same either cannibalization or struggle to attract tenants because we’re competing against another mall,” he said. 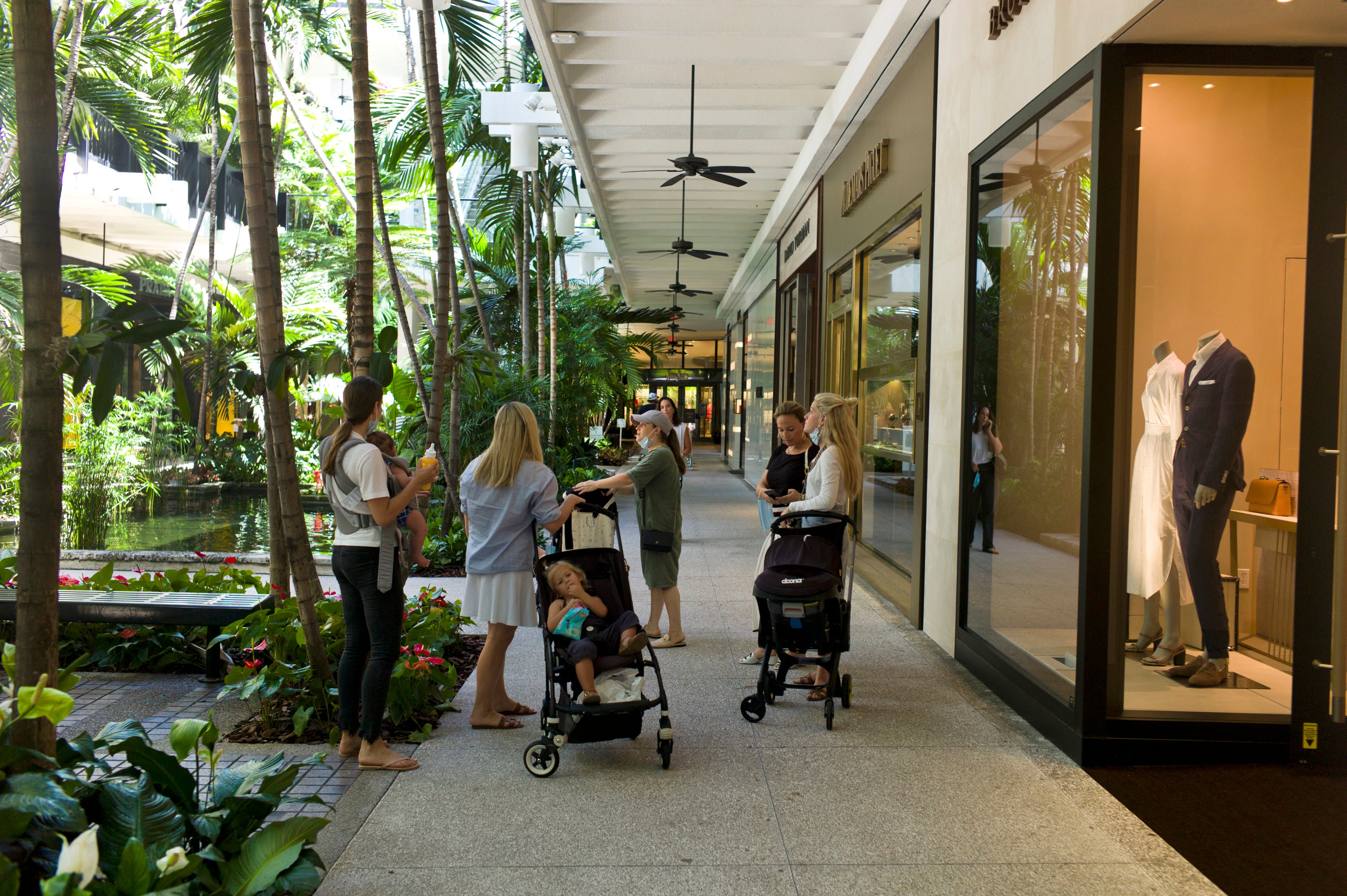 Shoppers at the Bal Harbour Shops outside Miami.

As of June, 84% of the country’s 1,174 malls were considered healthy, reporting vacancy rates of 10% or less, according to the CoStar Group, a data provider for the real estate industry.

But that compares with 94% in 2006. And the percentage of healthy malls is expected to drop further as retailers carry out store closings announced this year, accounting for more than 83 million square feet of retail space. A significant percentage of that comes from apparel stores, which represent about 60% of occupied mall space.

Major mall operators have started to signal concern. The Simon Property Group, the biggest mall operator in the United States, is trying to terminate its $3.6 billion deal to acquire Taubman Centers, which owns and operates about two dozen high-end shopping centers.

In court filings last month, Simon Property said that Taubman’s malls were mostly enclosed and that indoor malls “are the last types of retail real estate properties that most consumers will want to visit on a long-term basis after COVID-19.” (Simon Property also owns many enclosed malls.) While Taubman has promoted its wealthy, educated shoppers as an asset, Simon Property said that those consumers in particular are now “far more able and likely to use online shopping.” The sides have been ordered to enter mediation, but if an agreement isn’t reached by the end of the month, they will go to trial.

CBL & Associates Properties, which owns and operates roughly 60 malls, outlet stores and open-air shopping centers in the United States, said in filings last month that it was skipping about $30 million in interest payments due in June “to advance discussions with its lenders and explore alternative strategies,” and that there was “substantial doubt” it would continue to operate as a concern.

Jim Hull, owner and managing principal of the Hull Property Group in Augusta, Georgia, which oversees 30 enclosed malls, expressed frustration about the exit of big national chains from “smaller or tertiary markets.” The result, he said, is that “the majority of people living in the smaller markets will either have to buy from the internet or have to drive 45 miles,” he said. 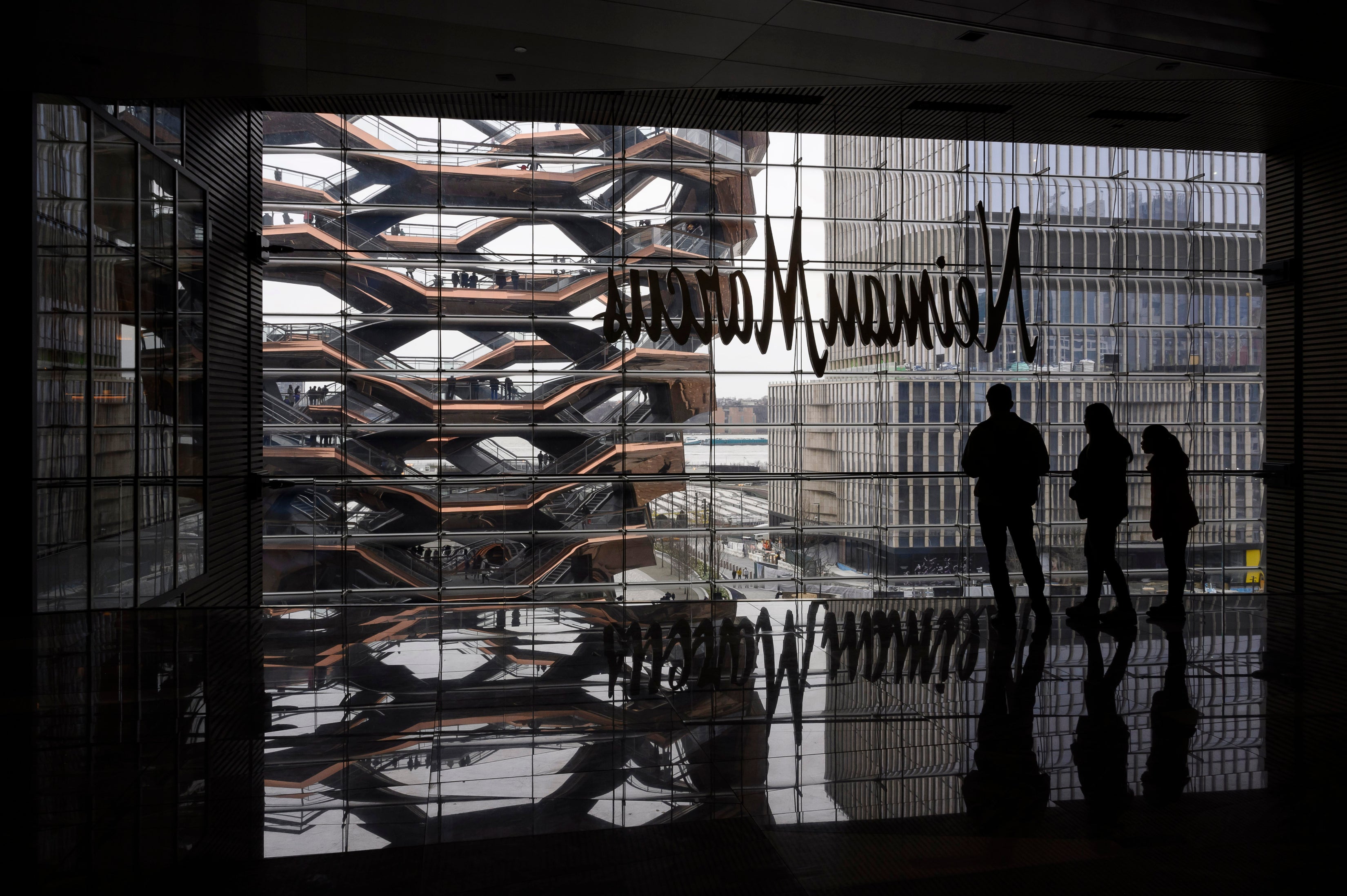 Neiman Marcus is one of the most prominent department stores to file for bankruptcy during the pandemic.

Already this year, Victoria’s Secret said it would close 250 stores in North America, while the Gap brand is closing at least 170 stores globally. Financial troubles are plaguing mall chain companies like Ascena Retail, which owns Ann Taylor and Loft, and the owner of New York & Co. And bankruptcies since early 2019 have included mall staples like Forever 21, Things Remembered, Payless ShoeSource and GNC. Lucky Brand Dungarees filed for bankruptcy Friday.

In Cupertino, California, where Apple has its headquarters, the fate of the shuttered Vallco Shopping Mall has become a contentious issue, with impassioned public debates around replacing it with affordable housing, new entertainment and retail options or office space.

In the meantime, it is a partially demolished eyesore, according to Rod Sinks, a member of the Cupertino City Council. “We have a chain-link fence around the whole thing,” he said.

In Los Angeles, the former Westside Pavilion mall, once featured in the movie “Clueless” and Tom Petty’s “Free Fallin’” music video, is turning into office space for Google. Terri Tippit, the 74-year-old chair of the local Westside neighborhood council, lamented the loss of the space and said it “reflected the way our society is changing and going.”

Still, some investors have bought midtier malls in recent years and have already been working on how to repurpose and change spaces — even “de-malling” malls by flipping store entrances so that they face the street.

“We didn’t buy malls since 2014 thinking that J.C. Penney or Sears or Bon-Ton were going to be in business forever and operate department stores, and if you were, then shame on you,” said Ami Ziff, director of national retail at Time Equities, a real estate firm whose investments include eight enclosed malls. “Is there going to be more distress, vacancy and bankruptcy? Yes. Hopefully, you know what you’re doing so you can pick up the pieces to refill that space.” 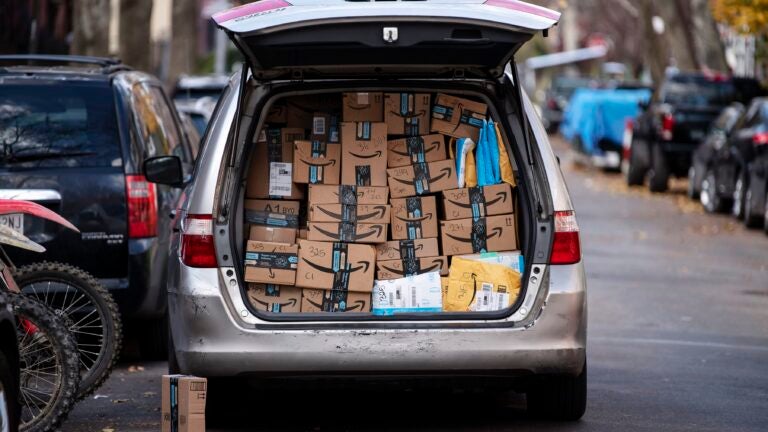