ENFIELD, Conn. — The bones of Brooks Brothers stores are scattered across 100,000 square feet here in a warehouse near the Massachusetts border, mixed in with a sea of cardboard boxes and junk.

There are legions of mannequins, empty circular tables that once displayed neckties, posters of horseback-riding gentlemen from a bygone era. There is a whole section of Christmas trees and countless gold-painted ornaments of sheep suspended by ribbon — a Brooks Brothers symbol since 1850 known as the Golden Fleece. Blank order forms for tailors are strewn about. A neon sign that apparently still works. There is no apparel, but there are rows of heavy sewing machines that most likely came from one of the brand’s recently shuttered factories. And in the bathroom, a welcome carpet with Brooks Brothers written in cursive sits next to a toilet.

The whole mass was abandoned here in the fallout of Brooks Brothers’ bankruptcy filing and sale last year, the scraps of a retailer that made nearly $1 billion in sales in 2019. Ever since, the couple who own the warehouse, Chip and Rosanna LaBonte, have been scrambling to figure out how to get rid of it all. Junk removal companies have told them it will cost at least $240,000 to clear the space, which Brooks Brothers had rented through November. In order to pay the bill, the LaBontes are going to have to sell their home. Chip and Rosanna LaBonte, owners of the warehouse where Brooks Brothers stashed its stuff before abandoning it.

The couple’s plight illustrates the far-reaching consequences of retail bankruptcies, which cascaded during the pandemic and affected everyone from factory workers to executives. Smaller vendors and landlords have often been left holding the short end of the stick during lengthy byzantine bankruptcy proceedings, particularly with limits on what they can spend on legal bills compared with larger corporations. And once bankrupt brands are sold, people like the LaBontes are typically left in the dust.

“It is a very sad situation that unfortunately does happen quite a bit because it is just part of the bankruptcy situation as the statute is drafted,” said James Van Horn, partner and retail bankruptcy specialist at Barnes & Thornburg. “Unfortunately, creditors can become victims, and sometimes they have little or no options to recover what is owed them.”

Retailers like Brooks Brothers were prominent among the more than 600 corporate bankruptcies in the United States last year, which had the highest number of filings in a decade, according to S&P Global Market Intelligence.

The LaBontes, who are in their 60s, have been working with a liquidator to sell what they can of the Brooks Brothers detritus and are about to list their home in Sherborn, Massachusetts. While they have filed a claim in bankruptcy court, they are anticipating receiving less than 5% of what they are owed, if that — and confessed that the proceedings are hopelessly confusing. Most of all, they are angry and incredulous about the situation, especially as Brooks Brothers continues to operate under wealthy new owners. The LaBontes are selling what they can, before hiring people to haul away the junk. An old rug that used to welcome shoppers to a Brooks Brothers store. 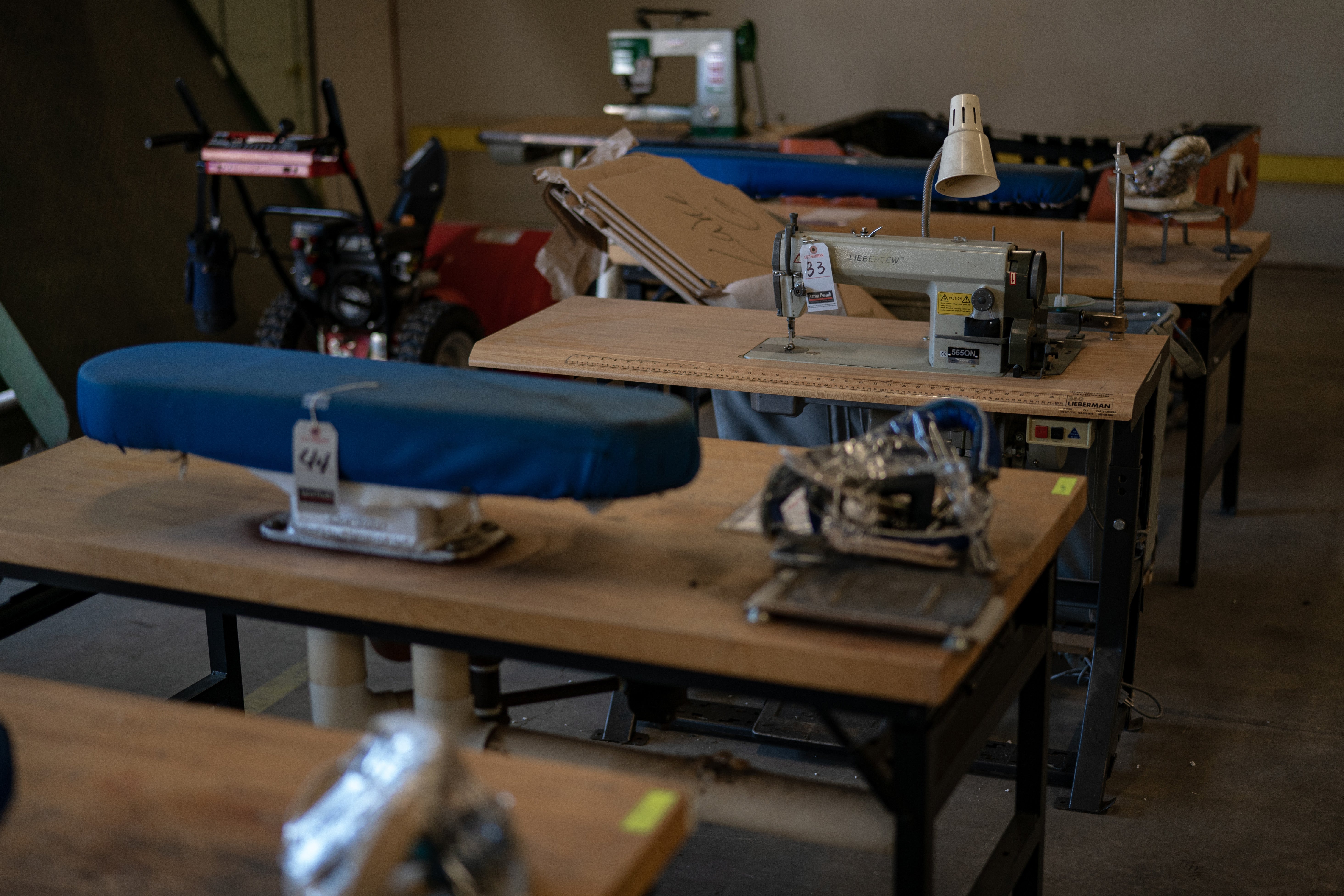 “We understand going out of business and the bankruptcy, but to dump their problem on us and walk away from it and make us incur this cleanup cost?” Chip LaBonte said in an interview in Enfield, Connecticut. “Nobody would anticipate an expense like this; we don’t have rainy-day money to deal with it.”

The couple bought the warehouse in 2010. They said that it was their first foray into commercial real estate and that they worked on residential projects before that. They have other tenants and a self-storage section but are frustrated about the mess and the fact they cannot use the space for anything else until it is cleared.

Brooks Brothers, which was founded in 1818 and is the oldest continuously operated apparel brand in the United States, began renting the warehouse in Enfield in 2011, most recently at a rate of roughly $20,000 a month. (Brooks Brothers also has a corporate office and distribution center in Enfield.) The building, which spans about 375,000 square feet, is held by the LaBontes through KBRC Realty. It is the firm’s sole holding and the couple’s main source of income.

The office attire segment of retailing as a whole was battered last year as many Americans worked remotely, ditching entire portions of their closets. J. Crew and the owners of Ann Taylor and Men’s Wearhouse also filed for bankruptcy, while sales nose-dived at chains like Banana Republic. Temporary store closures added to the distress, along with the cancellations of special occasions like proms, graduations, weddings and other events.

All that led up to Brooks Brothers’ bankruptcy filing in July, one of the most significant retail collapses of 2020. Brooks Brothers had dressed all but four U.S. presidents at the time of its filing and prided itself on its U.S. factories, which were also forced to close.

But investors saw value in the brand, and the retailer was quickly purchased for $325 million by Simon Property Group, the biggest U.S. mall operator, and Authentic Brands Group, a licensing firm. The Brooks Brothers flagship store on Madison Avenue in Manhattan in 2018, the year the brand turned 200.

The firms have been buying up a string of bankrupt mall retailers through a joint venture called the SPARC Group, including Lucky Brand denim and Forever 21, leveraging the combination of Authentic Brands’ expertise in licensing famous brand names in various lucrative and creative (and some say equity-destructive) ways and Simon’s real estate portfolio.

At the time of the Brooks Brothers purchase, SPARC committed to keep operating at least 125 Brooks Brothers retail locations, compared with 424 retail and outlet stores globally before the pandemic.

Under the new owners, Brooks Brothers switched to wire transfers instead of checks but kept paying rent on the warehouse through November, sending even more goods there as it closed dozens of stores and shuttered its three U.S. factories, the LaBontes said. But after Thanksgiving, it sent a letter to the couple rejecting the lease as well as the contents of the warehouse. According to a person with knowledge of the deal, the warehouse and its contents had not been part of SPARC’s purchase of Brooks Brothers. As a result, Van Horn said, the new owner most likely has no legal responsibility to the LaBontes. A representative for SPARC stopped returning requests for comment.

“They used it for all of their store fixtures — so, tables, props, fishing poles, canoes, everything you would see that would go in and out of a store to decorate it,” Chip LaBonte said. “There’s probably 20,000 square feet of Christmas trees — everything except the actual merchandise.”

As to who would want it now, customers have included local clothing-makers looking for mannequins and a set designer from an upcoming HBO series called “The Gilded Age.” Last Monday, an older couple wandered through the space, looking at the Christmas decorations and empty gift boxes. Habitat for Humanity has been looking at the haul for several days and is taking some of the goods. Still, Chip LaBonte estimated that somewhere around 30% of the leftovers have been sold. A Brooks Brothers store at a mall in North Carolina, closed during the pandemic last May. Office-wear retailers were hit especially hard.

The liquidator paid the LaBontes approximately $20,000 to sell what they can through mid-April or so. The couple will not receive a cut and will deal with what is left. When junk removal specialists assessed the cost of clearing the space in December, one quote was around $243,000, while the other was closer to $290,000.

“We’re just another COVID casualty to them; we get that,” Rosanna LaBonte said of Brooks Brothers. “But I also don’t think they realized how much stuff was there.”

The junk removal firms, which confirmed the prices with The New York Times, said that it was expensive to remove the volume of goods. The costs included labor; multiple trips to dumps and donation and recycling centers; and the use of specialized equipment such as a forklift, large dumpsters and an 18-foot box truck.

“I’ve been doing this for seven years, and I’ve never seen anything like this before,” said Rick McDonald Jr., the owner of EastSide Junk, which provided the $243,000 quote to the couple. “They left an astronomical amount of stuff.”

When Authentic Brands, the licensing firm, announced the purchase of Brooks Brothers out of bankruptcy last year, Jamie Salter, the company’s chief executive, spoke about the retailer’s legacy and its “incredible history.”

The LaBontes, confronting a warehouse full of some of that history, were unhappy to see those comments.

They put out a statement recently asking, “What kind of heritage can they claim when they operate like low-rent, fly-by-night bullies?” 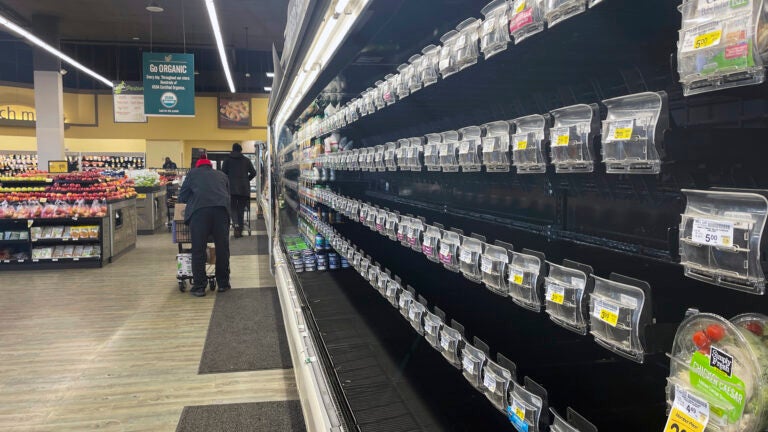