It was bound to be a controversial proposal, especially coming from Republicans (who tend to be wary of public assistance): As some businesses face an employee shortage, the state would give $1,200 to jobless residents who accept a new position and leave their unemployment benefits behind.

Proposed by Republican state senators like Sen. Ryan Fattman of Webster, the idea is that the money — presented in three installments over the first year of successful employment — would make giving up those unemployment checks more palatable. It’s an idea that a slim majority of the Boston.com readers who responded to our poll think is, well, not good.

Instead, they think just cutting off (at least) the extra unemployment benefits instituted during the pandemic should be enough. “I think it’s way beyond babysitting the unemployed when you pay them to look for work,” wrote Jillian of Rockland. “Preposterous; just stop the benefits.”

It’s a view not currently shared by our Republican governor, Charlie Baker, who attributes current levels of unemployment to pandemic-related layoffs that have yet to be reversed, and health concerns that will abate as more people are vaccinated and COVID numbers improve.

“If you look at a lot of the folks who lost their job and continue to be out of work over the course of this pandemic, many of them work in hospitality, service, restaurant industries and are folks who are hardworking people,” he told GBH earlier this month. “Those are the folks who, most of all, we should be worrying about continuing to support,” he said.

Other readers, meanwhile, objected not so much to providing the payment, but rather to the idea that perennially low wages make it necessary. “Why should the state foot the bill for businesses that pay lousy wages?” asked one reader.

In total, of the about 130 readers who responded, 51 percent opposed the idea, 44 percent supported it, and six percent responded “Other,” one of them offering this proposal: “The bonus should be given to employees through payroll (hourly), to incentivize employers to pay people a living wage permanently.”

Almost 40 people elaborated on their opinions about the proposal to pay successful job-seekers; here’s a sampling of what they had to say.

Nope, cut off unemployment payments instead

“Stop enabling people with the ‘free money’ and watch people go back to work. How about a bonus for the people that worked through the pandemic!” — Kathy, Boston

“How about we stop the extra money for unemployment, no $1,200 bonus for getting a freakin’ job and just get a job!” — Scott, Billerica

“As a small business IT Consultant with clients all over the Northeast, we are lacking support and desktop people. Why, because the pay is roughly just a bit more than what they are getting on unemployment and bonus. How can I hire someone at $40-45k when they make $36-40k staying at home? I know some friends who are not going back to work and collecting while it lasts.”

“The government should not be paying people to stay home. All able-bodied individuals who are not working should be actively working as there are plenty of jobs out there. People need to swallow their pride and get a job where they are needed. If it’s not perfect, or below their previous ‘pay grade,’ it should be considered temporary while they look for something more permanent. The less people rely on the government the better off they’ll be.”  — K. Lee, Pinehurst

“I work in the construction industry and it’s very difficult to find people that want to work. This proposal will get some more individuals to sign up but people aren’t dumb. The math says stay unemployed and you’ll get paid more.” — Matt, Walpole

“That money would go to better use helping businesses or people who were negatively affected by COVID.” — Alice, Jamaica Plain

How about companies pay better wages?

“If your business isn’t going to pay market rates that’s the business’s problem, not the taxpayers’. We should be paying living wages and people would want to work.”

“A smarter solution to getting people back to work would be paying fair wages. *GASP!* What a crazy concept! If people are making more money on unemployment (which is less than their previous take home) and barely getting by, why would they take a job that makes them even less money? Unless you really want to go into even more debt, that doesn’t sound like a smart choice.”

“[The proposal] is very short-sighted. We need to be asking what it takes to ensure employers pay living wages so unemployment is not attractive, and used only when necessary.”

“The hurtle is competitive wages! If a business can’t compete then they have failed as a business. Why should the state foot the bill for businesses that pay lousy wages?”

It’s worth a shot

“I think it’s a good idea — there’s a shortage of workers right now across many industries, especially in hospitality and restaurants. Hopefully this will lead to an influx of workers at a time when the economy is opening back up.” — Norm, Medford

“Great idea — people don’t want to go back to work when they are making as much or more to sit on their rear ends.” — Joe Salman, Webster

“I think this is a good idea — having people return to the workforce should be a priority, so the local politicians have a choice, either this proposed carrot, or the stick.” — Jeff, Framingham

“Maybe it will cost the state less in the long run than paying out more unemployment benefits and also bring in more income tax revenue. It’s basically a tax break for a year for those getting off of unemployment and going back to work.”

“Better to give people money to work than to give them money to not work, plain and simple.”

Maybe if you sweeten the pot

“$1,200 is not enough to entice restaurant workers to come back. If they get sick, the cost they pay down the road will be greater than that.” — James, Mission Hill

“What is 1,200 bucks, the cost of living here is insane. Everyone has rent and bills to pay, everyone is in debt, now Biden not cancelling student debt screws everyone that was counting on that. Not to mention the jobs being offered to people are below what they made before — no account exec making $50,000 is gonna go work at McDonald’s for $18,000. Who can live on that? Not to mention the employers who are offering the same jobs at lower pay, I mean come on.”

“Seasonal and temporary jobs wouldn’t allow people to collect these bonuses anyway. And people may be hiring, but getting a minimum wage job instead of what I’m qualified for will hurt me in the long run.” — Stacy, Easton 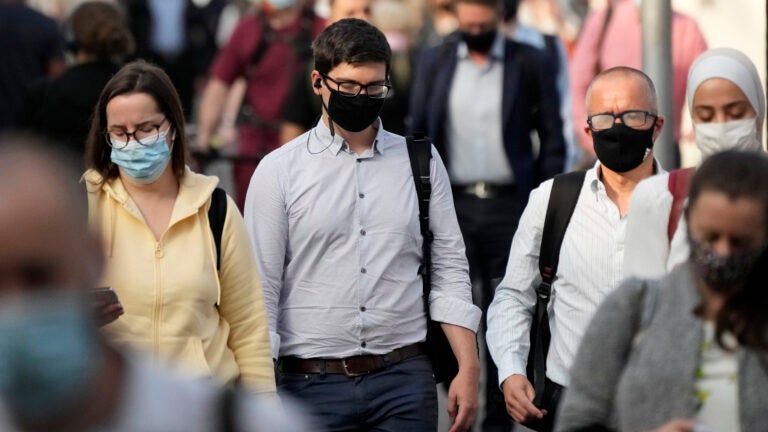 Should Mass. reinstate a mask mandate? Here's what 1,700 readers said.