Retail workers, drained from the pandemic and empowered by a strengthening job market, are leaving jobs like never before.

Americans are ditching their jobs by the millions, and retail is leading the way with the largest increase in resignations of any sector. Some 649,000 retail workers put in their notice in April, the industry’s largest one-month exodus since the Labor Department began tracking such data more than 20 years ago.

Some are finding less stressful positions at insurance agencies, marijuana dispensaries, banks and local governments, where their customer service skills are rewarded with higher wages and better benefits. Others are going back to school to learn new trades, or waiting until they are able to secure reliable child care.

“It was a really dismal time, and it made me realize this isn’t worth it,” said 23-year-old Aislinn Potts of Murfreesboro, Tenn., who left her $11-an-hour job as an aquatic specialist at a national pet chain in April to focus on writing and art. “My life isn’t worth a dead-end job.”

In interviews with more than a dozen retail workers who recently left their jobs, nearly all said the pandemic introduced new strains to already challenging work: Longer hours, understaffed stores, unruly customers and even pay cuts.

Christina Noles spent much of the pandemic working the closing shift at a dollar store – sometimes nine consecutive days without a break – for $10.25 an hour. She felt isolated, anxious and demoralized.

Last month, the 34-year-old from Concord, N.C., quit, leaving the industry she’s worked in for most of her adult life. Now she works from home for a local law firm – a job that, three days in, still seems too good to be true.

“There’s a part of me that feels like this must all be a dream,” Noles said. “There were a lot of things I liked about retail: I love talking to people and helping them, but the pandemic made me realize it was untenable.”

Labor professors and economists say the pandemic also made it harder for the nation’s 15 million retail workers to find reliable child care and public transportation. But now that life is returning to normal, analysts say, workers have begun to realize they have options, capitalizing on the latest waves of hiring and government stimulus as catalyst for career change. Companies of all sizes, meanwhile, are offering a host of perks, from free appetizers to subsidized college courses, to attract and keep workers.

“We’re seeing a wider understanding that these were never good jobs and they were never livable jobs,” said Rebecca Givan, a professor of labor studies and employment relations at Rutgers University. “In many cases, the pay is below a living wage and the hours are inconsistent and insufficient. If anything, the pandemic has made retail jobs even less sustainable than they already were.”

It is too soon to tell, she said, whether the latest exodus reflects a long-term shift away from retail work. Some employees, for example, may return to the industry once child care is more readily available and other pandemic-related challenges ease, but others are turning to industries where workers are in high demand.

Noles said she began mulling a career change after five colleagues tested positive for the coronavirus late last year. Her lucky break, she said, came on a particularly busy night when the checkout lines snaked to the back of the store. A customer in line, who was charmed by her upbeat nature and impressed that not a single customer left despite the wait, encouraged her to apply for an opening at her law firm. Noles applied in April and, a few weeks later, was offered the job as an intake specialist, earning $13 an hour, plus benefits.

With much of the country easing pandemic-era restrictions, service establishments like restaurants, gyms and salons are offering better pay and benefits to rebuild the staffs that got gutted during the crisis. Sectors like real estate, professional services, banking and insurance are also hiring – often at higher wages than retail, where median hourly pay for store employees hovers around $13 – in anticipation of renewed demand, according to Julia Pollak, a labor economist for the site ZipRecruiter.

“In a tight labor market, we often see big shifts among workers with low earnings,” she said. “If you’re making $12 an hour and there’s a job down the street offering $12.50, why not jump? There’s no reason not to – which is what’s happening now.”

“Hiring now” signs are cropping up on storefronts big and small as retailers scramble to fill openings. Many have raised wages or benefits to keep up. Target, Best Buy, Under Armour and Kay Jewelers all recently increased starting minimums to $15 an hour, while Amazon is offering sign-on bonuses as high as $1,000 to new employees. (Amazon founder Jeff Bezos owns The Washington Post.)

Overall, retailers had nearly 1 million job openings in April, more than twice as many as they did a year ago.

Millions of retail workers were let go – unknowingly permanently – early on in the pandemic as dozens of retailers tumbled into bankruptcy, shuttered locations and sometimes liquidated thousands of stores. The result was a bifurcated industry – with booming business at supermarkets, pharmacies and hardware stores, while spending on clothing and other nonessential items tanked. Now that spending patterns are evening out again, retailers are having to hire accordingly to meet demand.

Some labor experts, though, say retailers are not going far enough in addressing structural problems in the industry. Retailers, they say, should be focusing more on stable schedules, safer working conditions and benefits like paid sick leave and vacation time.

During the pandemic, they said, many employees were also forced to take on new responsibilities, often without proper protections or adequate health-care coverage to protect them from illness. And though customers were mindful of safety restrictions early on, workers say that quickly faded, leaving them vulnerable to verbal – and sometimes physical – altercations over social distancing and mask requirements.

Chris Overland, who sold electronics at a national chain in San Antonio, took a $4-an-hour pay cut during the pandemic before finally deciding to quit last month. The 25-year-old quickly found work in construction.

“To be getting paid $10 an hour in the middle of a nationwide crisis, it just left a sour taste,” Overland said. “Now I’m doing more physical labor, but it’s better pay and I’m having a lot more fun without the stresses of retail. It feels better, mentally.”

Jesse Rumpca quit his job at a liquor store last month to become a firefighter for the Oregon Department of Forestry. The 29-year-old, who has a degree in geography and environmental studies, took on retail work in March when most other industries weren’t hiring.

But as the pandemic wore on, he felt increasingly anxious about getting sick during shifts, sometimes double- or triple-masking. When he found in early May that he hadn’t been informed when a close colleague tested positive for the virus, he quit on the spot.

“I kept working because I had to pay bills, but it was never going to be a long-term job,” he said.

Some workers say the pandemic made their jobs logistically difficult, if not near impossible to continue.

Bob Beall, who is deaf and relies on reading body language and lip movements to communicate, left his position as a manager at a Lowe’s store in Bennington, Ill., at the beginning of the pandemic once mask requirements made it tough to understand customers.

He dipped into his retirement savings and got an associate’s degree. Now, after a 35-year career in retail, he’s embarking on a new one with a facilities maintenance job for Kohler. He’s taking a 30 percent pay cut and will be working nights, but says he’s hopeful he’s moving into a growing field with ample room to advance without the “mental fatigue” of working in a customer-facing job. 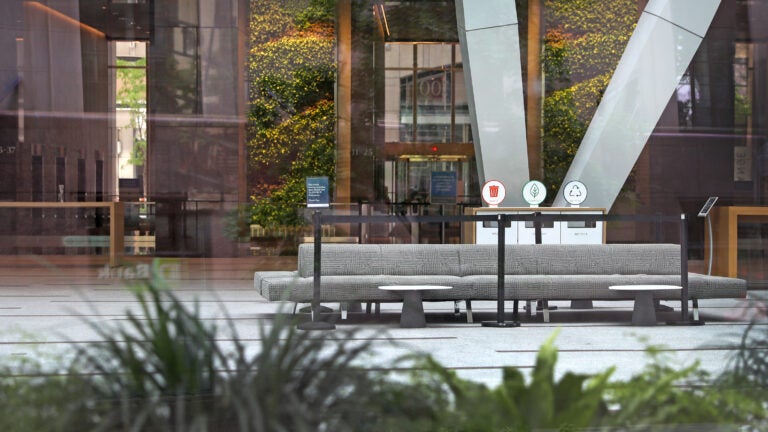