When it started, the COVID-19 pandemic quickly became responsible for the rapid embrace of a new way of working.

Heaps of employees, dislodged from the regular hum of their previous daily routines, took to remote work and new technology.

And while the severity of the virus will likely retreat this year, those workplace transformations aren’t going anywhere, at least not any time soon, experts say.

With that, state lawmakers have now taken on a duty to make sure Massachusetts gets it right — that those changes don’t just work well, but work for employers and workers.

A new report compiled by the Legislature’s 17-member Future of Work Commission, released recently, takes a broad dive — a look from “30,000 feet” — into the implications of the sweeping shifts and a wide variety of next steps on everything from transforming workforce development to ensuring equity.

Lesser, who co-chaired the commission, said the group was first in the works before COVID when, even then, there were “pretty profound questions” about how automation and other technology could shake up the workforce and how working patterns could change as the 21st century rolls on.

“As we now hopefully come out of COVID, this report was really about thinking through what the state needs to be doing to engage with our workforce,” said Lesser, who is also running for lieutenant governor.

State Rep. Josh Cutler, the House co-chair of the commission, said the report will also help lawmakers to “create a roadmap” toward meeting the state’s labor shortages.

“We are, as many people know, in an era of labor shortfalls,” said Cutler, a Duxbury Democrat. “So it’s incumbent upon us as policymakers to really look at creative ways that we can upscale and reskill incumbent workers to make sure we’re filling those labor needs.”

Baker tapped McKinsey and Company, the consulting behemoth, to dive into how COVID-19 could alter the state economy — and life itself in Massachusetts — over the next decade.

That report, released in July, generally found the Bay State was well positioned for a strong recovery from the pandemic’s financial crisis.

The workforce, however, is set to see some lasting changes: As automation takes hold, hundreds of thousands of workers will need to find new ways to make a living, Baker’s study said.

Here’s what the latest report found:

The state must ‘transform’ workforce development.

With the rise of technological changes and automation, workers in the Bay State may see their own jobs transition, phase out, or be altogether eliminated — some 16 percent of all positions — in the future, according to the report.

To meet those changes, there will be great need for “re-skilling and up-skilling workers,” depending on a given industry.

The report states “experienced workers in fields such as office support, retail, hospitality, and food services may be displaced, requiring transitions among occupation or industry at an unprecedented rate.”

Black and Latino workers, who make up large portions of the service and production industries that are most likely to see automation take hold, will “experience the greatest need for job training.”

Lesser, who summarized the report’s main findings, put it bluntly: “Education and worker training is going to need to transform, frankly, to ensure workers are connected to the jobs of the future.”

Lawmakers must “dramatically expand existing workforce training infrastructure,” he said. Massachusetts must adopt a training system that gives workers “more stackable credentials that are iterative” so workers can develop and grow skills as technology evolves, he added.

“We need employers to be partners with their workforce in training, and we need to make sure the state is incentivizing that,” Lesser said.

Other recommendations from the study include ensuring the state supports worker transitions into clean energy jobs, invests in diversity and equity initiatives, and extends benefits for working seniors.

As working parents likely already know, child care in Massachusetts doesn’t come cheap, that is, if it’s available at all.

Additionally, Massachusetts holds “the seventh highest rate on inclome inequality” in the U.S. – and the report found wage polarization will only get worse in the years to come.

The commission’s report acknowledges even before the ongoing pandemic, the state’s early education and child care system was “deeply strained and over-capacity.”

Child care centers closed for months because of the health crisis, and when they reopened, workforce challenges, health measures, and capacity limits all created new obstacles for the industry.

“We need to close the child care access gap for working families,” Lesser said. “We need to increase salary and training opportunities for child care workers.”

The report also delves into other “work adjacent” issues, like public transportation. More transit services must be made available “to fit the commuting pattern and needs of the worker,” lawmakers wrote.

Hand-in-hand with that are recommendations to use “existing housing development and zoning reform tools to increase housing options.”

With demand for affordable housing, policymakers, especially Lesser, have offered that expanding public transit into western Massachusetts could help cool the state’s housing crisis, particularly in eastern regions of the commonwealth.

The so-called “east-west rail,” Lesser has said, could help attract residents to western areas of the state where housing is generally less expensive, while also connecting those communities to job centers like Boston.

The promise of remote work has also untethered workers from physical offices, which some have said could help drive people to settle in cities and towns that have experienced an exit migration in decades past.

With hybrid and remote work models “here to stay,” the latest report advises state leaders to “invest in downtowns and Main Streets to entice workers to settle in new regions.”

“Hybrid or remote options eliminate cumbersome commutes but require greater flexibility for necessary infrastructure and resources such as child care, eldercare, and self-care,” the report reads.

Lawmakers need to put a ‘primary focus on equity and inclusion.’

In all the endeavors discussed by the commission, officials must put an emphasis on interweaving racial justice, equity, and inclusion into each, Lesser said.

“It needs to be part of every component of the policies,” he said.

The commission’s report found that inequities for minority workers were exacerbated during the pandemic.

“Additionally, increased adoption of technology and remote and hybrid work among many knowledge workers tend to trend in occupations in which white and male workers stay retained or quickly regain employment,” the report states. “Conversely, many frontline and service industry workers, who are disproportionately minority and lower-income individuals, were unable to regain employment in industries decimated by the economic impact of the pandemic such as restaurants, hospitality, child care, home health care, and many others.”

Of their recommendations, officials wrote the state should “encourage entrepreneurship within the minority community and expect more inclusive policies in high-growth sectors like venture capital, life sciences, and technology.”

“Minority individuals interested in pursuing entrepreneurship should be armed with the resources and support necessary to succeed in the startup and small business space,” the report states. “Providing state funding directly and intentionally to minority entrepreneurs is one important way to scale their path to success.”

Lawmakers also wrote of the need to provide more supports for women to return to the workforce, provide more language training that’s accessible for the immigrant workforce, and “reinforce educational equity” for low-income students and students of color.

‘It’s not all doom and gloom’: Mass. industries are ‘an incredible asset’ as new technologies emerge.

While Massachusetts has its fair share of challenges ahead, there are many silver linings, according to the report.

“Look, it’s not all doom and gloom,” Lesser told his colleagues last week. “The findings really confirm what I think all of us know… Massachusetts is really an incredible and special place.”

Many of the industries at the forefront of these changes, from robotics to biotech, are in the Bay State — something Lesser called “an incredible asset.”

“Keeping that, maintaining our competitiveness, and making sure that all of our communities in the state are really benefiting from that engine of innovation is going to be very, very important,” he said.

Future of Work Report by Christopher Gavin on Scribd 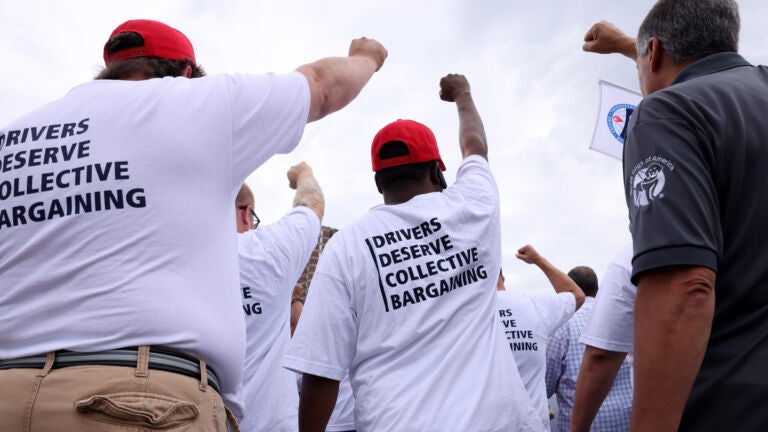 Here’s why rideshare drivers caravanned through Boston in protest