Following a hazing incident late last year, Northeastern University placed its chapter of a national fraternity on probation. Now, that fraternity has responded.

The incident in question occurred on Dec. 10 on Cedar Street in Roxbury. Members of the Phi Delta Theta fraternity were seen moving 16 blindfolded people into the back of a U-Haul box truck by a neighbor, according to a police report. Investigations by police, Northeastern, and Phi Delta Theta then followed.

“Phi Delta Theta holds the safety of every member of the fraternity, as well as the individuals of the campuses and communities they are a part of, in the highest regard. The Fraternity’s ritual does not involve inhumane acts that risk the comfort and the safety of its members,” the fraternity said in a statement from its general headquarters.

A neighbor reported the incident to police at around 7 p.m. They told officers that they had a video of the fraternity members getting into the truck before it left the neighborhood.

Terre Dilworth, a neighbor, told police that his surveillance cameras took video of more than a dozen people being led into the truck, according to Channel 7 WHDH.

“There were actually 20-plus kids who were blindfolded, jackets taken off, and led into the back of a U-Haul by other fraternity members,” Dilworth told WHDH. “You’re putting someone’s child at risk, allowing their lives to be put in danger for something that’s not worth it.”

When officers arrived at the fraternity house, two members told them that they were “conducting an initiation night” with pledges, according to the report. They added that the truck was driving aimlessly around Fort Hill.

The fraternity members that spoke with police said they did not know why Boston Police responded to the incident, and that “the initiation was harmless.” They also said that other fraternities perform “much worse” initiation ceremonies, according to the report.

After more officers were called to the scene and explained the dangers of the situation, they received confirmation that the pledges were taking an Uber or Lyft back to Roxbury from where they ended up in Needham.

“Phi Delta Theta does not tolerate any actions that directly contradict the values and policies of the Fraternity and holds strict rulings against members and chapters that violate Fraternity expectations and the law,” the fraternity added in a statement.

The probation includes sanctions, restriction of activity, and educational programming. The investigation found that no one involved in the incident was injured, according to Phi Delta Theta’s statement. The probation will last through the spring 2022 semester.

The fraternity is headquartered at Miami University in Oxford, Ohio. Phi Delta Theta has 193 chapters across the country, according to its website. 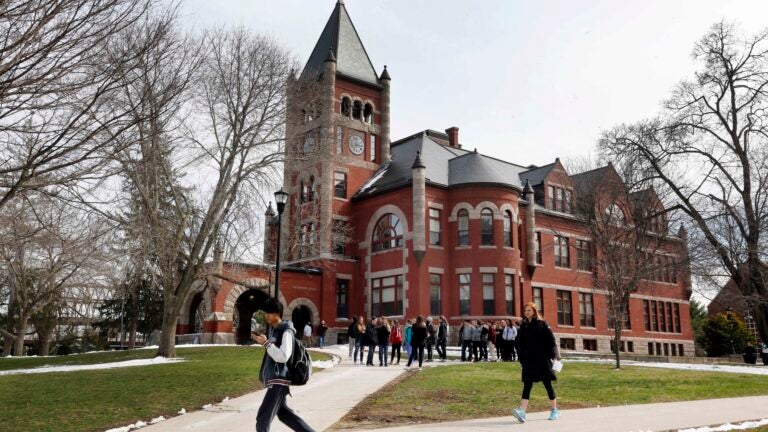