We have a house guest. His name is Anxiety.

He’s unpacked his things and settled right in. He mostly hangs out with my 5-year-old daughter.

He arrived about three weeks ago around the time my daughter began having nightmares. Her dreams were about our house burning down in a fire. They’d propel her into my bedroom in the middle of the night, where I’d pull her up into my bed, wrap my arms around her tiny body, bury my face in her hair, and whisper, “You’re safe, baby. You’re safe.’’

But no matter what I said, she didn’t feel safe. (Man, that hurts as a parent.)

That’s because anxiety was waiting for her when she woke up. And, it turns out, I wasn’t saying the right things.

The day after that first dream, I checked off for her all the reasons why our house was safe: We test our smoke alarms and do a nightly sweep. (Heaters clear? Check. Stove off? Check). I told her simply not to worry.

But it’s not simple. And it quickly got complicated.

The nightmares triggered a newfound separation anxiety in my daughter. She became worried something bad would happen to me and did not want me out of her sight.

Suddenly, my carefree kindergartner who skipped off to school without looking back last August did not want to go to school. She wanted to stay with me. When the bus rounded the corner in the morning, she’d complain of a stomachache. Those stomachaches would become a common theme over the next few weeks, landing her in the school nurse’s office and, eventually, the school guidance counselor’s office. It was a sign of anxiety.

Her guidance counselor created a notebook where we could write to each other every day. My daughter carried the notebook to school, holding my words against her heart. And it seemed to help. But after school she would cling to me. It got to the point where she refused to stay in the gym day care, a place where she’s been spending time without complaint for the past seven months. “Don’t leave me,’’ she begged with tears in her eyes. And I didn’t.

I wondered what was happening to my little girl. But it’s not unusual for children to have anxiety, said Dr. Donna Pincus, author of Growing Up Brave: Expert Strategies for Helping Your Child Overcome Fear, Stress, and Anxiety.

“Anxiety and fears are actually normal human emotions,’’ said Pincus, a psychologist and the director of the Child and Adolescent Fear and Anxiety Treatment Program at the Center for Anxiety and Related Disorders at Boston University.

And children are ripe for it.

“Anxiety rushes into that space between learning about something and mastering that concept,’’ said Dr. Tamar Chansky, a psychologist, author of Freeing Your Child From Anxiety, and director of the Children’s and Adult Center for OCD and Anxiety in Pennsylvania.

It’s normal for pre-school and elementary school-age kids to feel anxiety over things like the dark, monsters, storms, burglars, and peer relationships at school, said Pincus. And the fears can change weekly. But when anxiety gets in the way of a child’s happiness and his or her ability to complete routine activities, it’s time to reel it in.

How parenting factors in

According to Pincus, some kids are predisposed to anxiety.

“Anxious kids often come from anxious parents,’’ she said. “We do know there’s a genetic component to this. Your child may inherit a vulnerability to experience negative emotions.’’

Yes, I’ve been called a worry-wart by my husband. And I’ve called my mother the same. So perhaps my daughter is predisposed. And, while that makes me feel a little helpless, I’m learning that my parenting choices can combat it.

That’s because the way we parent affects our child’s levels of anxiety, say the experts.

“I never want to blame parents,’’ said Pincus. “Because these kids don’t come with books.’’

But Pincus wants parents to understand just how much of an influence they can have.

For example, overreassuring kids can backfire, because the more you reassure them, the more kids wonder if they’ll really be OK, said Pincus. And overprotecting kids “can actually rob them from critical teaching moments.’’

For example, letting your anxious child leave a birthday party early (or leave the gym daycare, I thought).

“In the short term, it reduces our anxiety and the child’s anxiety,’’ said Pincus. “But in the long run, the child hasn’t learned to deal with negative emotions or to take baby steps forward.’’

And don’t forget: Our kids are always watching us.

“We teach them through our everyday interactions,’’ said Pincus. “They watch us if we get lost when we’re driving. Do we scream and freak out? Do we pull over crying?’’

Verbalizing our behavior is helpful for kids, said Pincus.

For example, in the lost-in-the-car scenario, say, “OK, Mommy got lost. Mommy is pulling over. Mommy is going to check my GPS. And we’re not going to worry,’’ she said.

“It’s OK for kids to see you upset,’’ said Pincus. “But also verbalize things. You have to be more conscious.’’

There are many coping strategies experts use to help lessen anxiety in children, and parents can help their children too by learning from them.

Ask your child: What did Worry (or Anxiety) say was going to happen? Did it actually happen?

“Do we listen to Worry or put it to the test?’’ Chansky asks children.

You put it to the test, she tells them. And you do that by fact-checking.

“Kids love to be right, they love to question authority,’’ said Chansky. “We need to help them see that Worry is the thing they need to question.’’

“Rather than you just saying, ‘That’s your worry, this is what you need to do,’ you are engaging in a conversation where your child is actually taking ownership of it,’’ said Chansky.

Then parents can build on kids’ confidence by asking them to face their fear.

“Say, ‘OK, so Worry is wrong about this, but you’re not used to doing these things because Worry is so loud about it,’’’ said Chansky. “What are some things you could do to practice this without Worry bugging you?’’

Chansky calls these “courage challenges.’’ For example, if a child is afraid of going upstairs alone, once Worry is fact-checked, ask the child to go upstairs to retrieve an item.

“There’s a sense of a starting point and a goal,’’ said Chansky.

Pincus asks children to draw two circles on a piece of paper. The first circle represents how much kids worry about a specific fear. They draw a big one for that. The second circle represents the chance that fear will actually happen. That circle, it turns out, is significantly smaller.

“Kids write a little tiny speck on a paper — a crumb,’’ said Pincus. “They love making the little speck.’’

That satisfying speck is inspired by questions such as this: What’s the real chance of that happening? Has it happened before? How many days have you been alive? Has this ever happened in all of those days?

The goal is for children to feel empowered and, in turn, give Worry less control over them.

“Part of our job is to help kids develop these skills for coping,’’ said Pincus, the mother of three kids ages 10, 8, and 5. “You can’t suddenly expect them to do this at 8 if we haven’t laid the foundation when they were younger.’’

When should you seek professional help?

As Anxiety took over my daughter’s life, I wondered at what point (if at all) I should seek professional help.

“When a child is not making progress with the kinds of strategies that we’re talking about,’’ said Chanksy. “They’re getting more afraid of more things, there’s more avoidance of more things, or they’re just more distressed about normal activities that they need to do. Then that’s a sign that they need professional intervention.’’

Chansky said to give yourself at least a month using these strategies before you think about professional help. Pincus said give it a few months, but seek help sooner if your child seems very depressed and withdrawn and talks about wanting to hurt him or herself.

After using some of the above strategies, the notebook has become less important to my daughter. There are days when she doesn’t even think to look at it, let alone take it to school. The nightmares are still happening, but they’re happening less often. Perhaps she’s envisioning that tiny circle — that speck — she drew to represent the chance a fire will happen before she closes her eyes.

I’m hopeful that she’s beginning to learn the coping skills that will fend off Anxiety when he comes knocking. 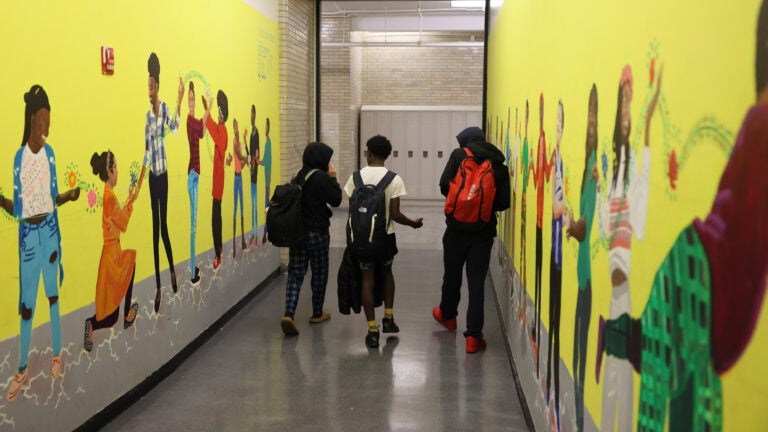