Paula Deen, the celebrity chef who lost cooking shows and endorsement deals when she admitted in 2013 to using racial epithets, celebrated “#TransformationTuesday’’ by showing how little she has changed.

Deen tweeted a 2011 photo of herself and her son, Bobby, dressed as I Love Lucy characters. See if you can tell what is offensive about this photo: 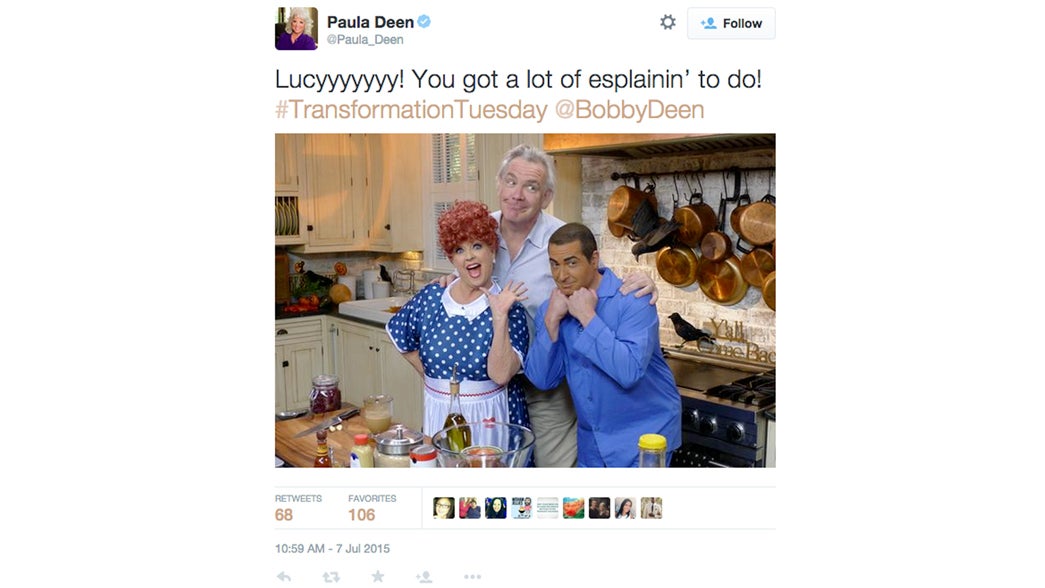 Yes, that is Bobby Deen, host of shows on both the Food Network and the Cooking Channel, wearing brownface as he “transforms’’ himself into Cuban bandleader Ricky Ricardo to Paula’s Lucy. The “esplainin’’’ isn’t a great idea, either.

The tweet was removed about an hour and half after it was posted, but the screenshot lives on.

Deen’s representative told E! News that her (now former) social media manager posted the tweet, and that Deen “apologizes to all who were offended.’’

In a significantly lesser offense, Deen appears not to have grasped the #TransformationTuesday concept, which is to post before and after pictures that show how much you’ve changed over time — losing a lot of weight, for instance, or the results of hitting up the gym. Actual transformations, in other words, as opposed to putting on an offensive costume.

Neither Food Network nor Cooking Channel responded to request for comment.

Despite no longer having a social media manager, Deen was able to break her Twitter silence … to plug her new book.