Catholic religious leaders across the United States are supporting coronavirus vaccination and in many instances discouraging demands for religious exemptions by congregants (though a few bishops have made exemption letter templates available).

In doing so, they are following the lead of Pope Francis, who gave approval to the recently developed vaccines, and determined that the role of tissue from 50-year-old aborted fetuses in the production and testing of some of them did not negate their acceptability, in the absence of a morally perfect vaccine. Catholic doctrine enables this judgment, because it distinguishes between “material” vs. formal cooperation with evil when it can be justified “for proportionally serious reasons” — in creating lifesaving medicines. Francis has also encouraged the Catholic faithful to get vaccinated, calling it “an act of love.”

Such a position shouldn’t be surprising. The American Catholic Church has historically come down on the side of public health, even when doing so has violated Catholic teachings. During the 1918 flu pandemic, American church leaders even temporarily sacrificed a central observance of Catholicism — the Mass — to slow the spread of the disease. Their decision illustrated how, for the church, preserving lives, even through imperfect means, has taken precedence over other deeply held beliefs.

The 1918 pandemic caused worldwide devastation and necessitated many restrictions on public activities, including religious assemblies. Religious leaders objected less on constitutional grounds that these restrictions interfered with religious freedom, and more because they saw worship as spiritually necessary.

American Catholic Church leaders, too, worried that these restrictions violated the Catholic teaching that failure to attend Mass is a mortal sin and therefore threatened to do spiritual damage to their flock. Yet Church leaders encouraged compliance with government directives and publicly criticized religious leaders who held services as usual. They granted broad dispensations from Mass attendance to encourage compliance.

The position taken by Bishop Regis Canevin of Pittsburgh is just one example. In October 1918, Canevin acknowledged that Catholics experienced hardship and sacrifice when they had to give up Mass. But Canevin emphasized that it was necessary to obey civil authorities who were tasked with protecting public health. Canevin argued, therefore: “The only rule for pastors and people is to cooperate with the civil authorities … ” He exhorted his flock to “obey the law and comply with regulations that are enacted for the common good.”

Another impassioned advocate for public health was Father James Coyle, rector of the Cathedral of St. Paul in Birmingham, Ala. Coyle, an Irish immigrant who was known for his outspokenness in defense of immigrants and the downtrodden, served as dean (vicar) and pastor of the most important Catholic church in Northern Alabama.

During the pandemic, Coyle publicly favored temporarily curtailing Mass, even while making sure people understood the sacrifice involved. He wrote a “Message for Catholics,” originally published in the Birmingham News, to justify the suspension of Mass.

In his message — probably crafted to win some converts to Catholicism as well — Coyle spoke of how central the Mass was to Catholic life, and the supreme obligation to attend. Coyle emphasized that the Mass was “no mere gathering for prayer” or simply coming to temple to join in “hymns of praise to the maker,” but an experience of the divine presence every Sunday. He underscored, therefore, that church leaders were not taking the decision to cancel public Masses lightly and showed empathy for Catholics who felt their loss.

And yet he reminded readers that “a legitimate excuse, of course, annuls the obligation” to attend and instructed Catholic faithful to hold at-home Masses instead.

It was not just parish priests and bishops who deferred to secular authorities, even as they sought to balance spiritual and public health needs. Cardinal James Gibbons, then archbishop of Baltimore, argued for allowing for the possibility of some sort of limited Mass, suggesting that “it would be a much-needed relief to our churchgoing population if they could be allowed to attend brief morning services,” observing that “a number of calls upon our physicians are simply the result of nervousness” and could be “considerably allayed by the reassurance of religion.”

Nonetheless, Gibbons, like so many of his brethren, chose to invoke a dispensation for his flock from the normal requirement of Mass attendance. And for Gibbons, granting these dispensations was no small deal, as it involved the cancellation of his own 50th Jubilee.

Catholic leaders recognized how hardship could prevent the conducting of Masses in multiple contexts — from wars to pandemics — and faith required adapting to these circumstances. Catholic leaders also placed importance on obeying secular authorities, reflecting a time when most American Catholics were immigrants or children of immigrants, and not as well accepted in the United States as they would become by the end of the 20th century.

But more significantly, they believed that this was a matter of life and death. Church leaders understood that they had the power to grant dispensations, providing exemptions from religious requirements in such cases. And they had no doubt about the stakes as churches tended to the sick and watched as priests succumbed to the flu. Church leaders, such as Bishop Thomas F. Hickey of Rochester, N.Y., also observed how obedience to public health guidelines reduced flu deaths.

In short, while Catholic leaders displayed respect and empathy for the centrality of religious belief and practice, they firmly sided with public safety even though it conflicted with religious doctrine.

This decision illustrated how the Church prioritized preserving life — even at the expense of other deeply held beliefs and teachings. Church leaders sought alternative ways to maintain religious commitments, and they expressed the imperfect nature of the solutions implemented, but they firmly sided with public health authorities.

Today, with online Masses a common and accepted option (even with temporary dispensations from attending Mass in person in some dioceses), the church has once again taken the side of public health by encouraging coronavirus vaccines.

Some parishioners may not agree with or understand the church’s stance – but it is consistent with the church’s long-standing handling of public health and its prioritization of measures that preserve life, even if morally imperfect. 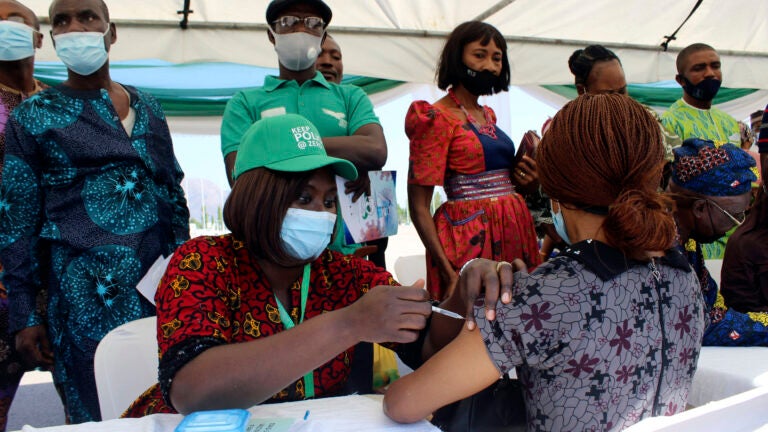