Coronavirus vaccines for children have just rolled out, but as some parents rejoice, others are bracing for a fight should school vaccination mandates follow.

Vaccine mandates have a long history, stretching back to the smallpox epidemics of the 19th century. But the vast majority of school vaccine mandates are more recent, dating back to the 1960s and ’70s. And battles over their terms were common then, too. The key to winning legislative approval, in many cases, was broad exemption clauses. The story of California’s 1960s polio vaccine mandate shows why — and reminds us that just as a vaccine is tailored to its target disease, successful mandates require tailoring too.

By the early 20th century, vaccination was commonplace against infections such as smallpox, tetanus, diphtheria and pertussis. It just wasn’t typically mandatory. Most states had laws or regulations that gave health departments the authority to require vaccination as needed. But the laws were infrequently invoked. Infectious diseases in general had come to seem like historical relics, increasingly fading into memory thanks to clean water, a safer food supply, better hygiene and antibiotics.

Polio was an exception. The disease, caused by viral infection, had first appeared around the turn of the 20th century, causing sporadic but increasingly larger outbreaks over several decades. By the 1940s, polio was unavoidable, and it was serious. It caused paralysis, and the most severe cases confined patients to “iron lungs,” massive contraptions that allowed their immobile lungs to take in air. The most tragic cases ended in death. Cases reached a staggering height of more than 520,000 in 1952 — a number that seems almost quaint today in the context of COVID.

The March of Dimes foundation took the lead in supporting research on a polio vaccine. When the government approved the first vaccine, developed by scientist Jonas Salk, for use in 1955, people wept and cheered and ran into the streets. They stood in line for hours at schools, shops and clinics to get the vaccine — some for themselves, but most for their children who were hit hardest by the disease.

Over the next two years, U.S. polio cases tumbled to a low of 5,400. And then, just as quickly, they began to tick back up. In outbreaks across the country in 1958 and 1959, cases concentrated among lower-income groups and communities of color, particularly in urban areas, where access to routine pediatric care lagged behind that in White, middle-class communities. In California, official reports on the problem attributed it to “apathy” and “forgetfulness” among those parents whose children hadn’t gotten the vaccine.

Ohio and North Carolina were the first states to tackle the problem with the force of law, passing new mandates that made the vaccine required for young children in day care or school. California then followed, with a bill co-sponsored by longtime pharmacist William Byron Rumford, a Black lawmaker from Berkeley, and Fresno Democrat Umbert J. Delotto, chair of his county’s chapter of the March of Dimes.

Rumford and Delotto’s 1961 bill required schools to bar students from admission if they could not provide either proof of polio immunization, a letter stating that the vaccine was “contrary” to the student’s “religious beliefs” or a statement by a licensed physician describing why the vaccine was not “considered safe” for the student.

When Fred Hart, founder of the San Francisco-based National Health Federation, heard about it, he ran diatribes against the vaccine in his newsletter and dispatched a lobbyist to Sacramento. Hart was a onetime lettuce grower, former radio broadcaster and erstwhile entrepreneur originally from Tacoma, Wash., who had founded the NHF in the 1950s to “strive vigorously against any or all trends or movements which would deny freedom of choice on the part of the doctor and the patient.”

He wrote to legislators and called on NHF members — some 30,000 to 40,000 “doctors, dentists, chiropractors, nurses, health-food-store owners, and individuals” — to do the same. Hart pressed Rumford and Delotto to table the bill, requested that it be referred to an interim committee for further study and asked for it to include an objection clause, so that anyone who didn’t want to be vaccinated against polio wouldn’t have to be. “It pays to have NHF on the job,” he assured his members.

To Hart, the religious belief exception in Delotto and Rumford’s bill was an opening. With his wife ill at home, he sent his colleague Don Matchan to Sacramento to protest the bill. Matchan disputed polio’s severity; even with local outbreaks, California saw just a few hundred cases a year. He questioned the vaccine’s safety, accusing it of spreading polio (in one tragic 1955 incident, it had). Requiring it, he said, violated “the individual’s basic rights.” If the committee did not table the bill, he argued, the only way to preserve those rights was to give the bill an “escape clause.”

With an “escape clause,” Rumford and Delotto knew the bill would pass. They decided to take a suggestion from Hart and strike the word “religious” before the word “beliefs.” With that, the bill became law. California children, like those in Ohio and North Carolina, would have no choice but to get the polio vaccine – unless they or their parents didn’t believe in it.

Hart rejoiced. “This is a real victory for the people,” he told his followers. Delotto called the law “a step in the right direction, even though it is not as strong as we would have liked it to be.”

That wasn’t the end of the story, by far. As it happened, Rumford and Delotto’s bill passed the same year Congress passed landmark federal vaccination legislation. President John F. Kennedy’s Vaccination Assistance Act allotted federal money to help states ensure that as many children were vaccinated as possible. By the time the California law went into effect, regulators had approved several new vaccines for children against such diseases as measles and rubella, which the California legislature added to the mandate, replete with its broad exemption.

Over the next several decades, federal assistance programs expanded until they provided nearly half of all vaccines given to children. By the time that happened, in the early 2000s, the nation had achieved its highest vaccination rates in history. But it also had more mandates than ever, and opposition to them was ballooning once more.

As vaccination resistance grew, outbreaks returned: epidemics of mumps, pertussis and, perhaps most infamously, measles unsettled parents and health officials alike in the 2010s. California responded as a number of other states did, by removing its long-standing belief exemption.

And then COVID-19 appeared.

If school coronavirus vaccine mandates are introduced in the near future, they will enter an era characterized by some of the most stringent vaccination laws in over a century. And they will undoubtedly kick the Fred Harts of today into high gear. Appeasing Hart and his allies cost little in the 1960s, a time when even health officials were tepid on the use of mandates. Polio continued its decline and outbreaks dissipated, even with the broad exemption in place.

But each disease is different, and eventually Hart’s exemption — uncontroversial and unquestioned for decades — played a role in the spread of other infectious diseases, especially highly contagious measles. In the case of COVID, leaders and health officials have an opportunity to keep two things in mind. Mandates will elicit opposition, and exemptions tailored to their specific target diseases can help appease it. Both mandates and their exemptions are, fundamentally, political tools, inextricably linked in the political negotiation inherent to securing public health in a democracy. 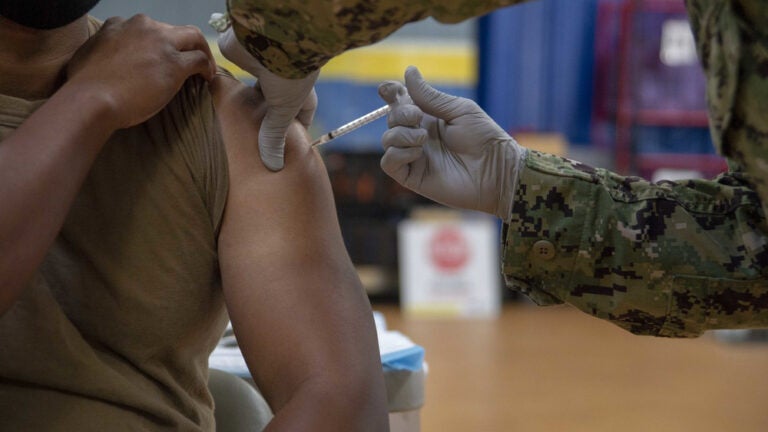 Vaccine holdouts in Navy, Marines hit 19,000 as deadline passes to comply with mandate