BERLIN – For weeks, virologists here have been asked a persistent question: Why, compared to other countries, are so few of the Germans who are diagnosed with coronavirus dying?

In Italy, 9.5% of the people who have tested positive for the virus have succumbed to covid-19, according to data compiled at the Johns Hopkins University. In France, the rate is 4.3%. But in Germany, it’s 0.4%.

The biggest reason for the difference, infectious disease experts say, is Germany’s work in the early days of its outbreak to track, test and contain infection clusters. That means Germany has a truer picture of the size of its outbreak than places that test only the obviously symptomatic, most seriously ill or highest-risk patients.

“At the beginning, when we had relatively few cases, when it came to finding them and isolating them, we did quite well in Germany,” said Reinhard Busse, head of the department of health care management at the Berlin University of Technology. “That’s the major reason.”

Other factors, such as the age of those infected and the timing of Germany’s outbreak, also play a role in the differing death rates. But testing widely has been key. Germany, with 31,150 cases at midday Tuesday, appeared to have a larger outbreak than France, with 20,149. But the higher death rate in France implies there were more undiagnosed cases there. France’s outbreak could be larger than Germany’s. 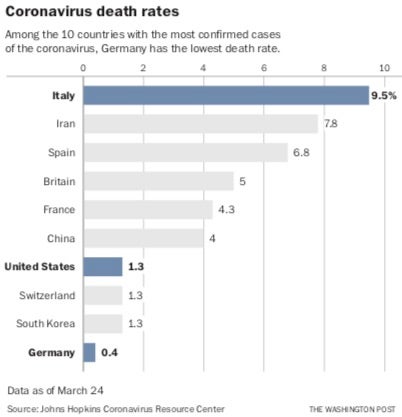 Initially, at least, the country’s health authorities tracked infection clusters meticulously. When an individual tested positive, they used contact tracing to find other people with whom they had been in touch and then tested and quarantined them, which broke infection chains.

Christian Drosten, a virologist at the Charité hospital in Berlin, said he’s “firmly convinced” that Germany’s high diagnostic capacity had “secured us an extreme lead . . . in the detection of the epidemic.”

But he cautioned against complacency, and said the death rate would increase: “We are no exception.”

Epidemiologists say it’s important to look at Germany’s outbreak in two distinct phases. As community spread became prevalent, infection chains in some cases became impossible to trace. Some doctors said they had no choice but to send people seeking tests back home to call jammed coronavirus hotlines because they lacked protective equipment to conduct then safely.

With cases growing exponentially, health authorities have moved on to ordering social distancing and banning mass events. Federal states have restricted gatherings outside the home to a maximum of two people.

South Korea, which has been praised as a model for responding to the outbreak, has a death rate of 1.2%. Busse credits Germany’s lower rate to timing.

“In South Korea, there’s been a longer duration of infections, so we can’t really compare,” he said. “We have lots of newly positive cases. They didn’t have the chance to die yet.”

Busse said Germany is more comparable to Norway. The Scandinavian country is at a similar point in its outbreak, it’s also worked to test and contain cases, and it also has a death rate of 0.4%.

Whether Germany’s distancing measures will “flatten the curve” is not yet clear. Lothar Weiler, president of the federal agency responsible for disease control, was hopeful Monday that a period of exponential growth might be slowing, but cautioned that it was too early to say, given fluctuations in data. He said the picture should be clearer by Wednesday.

Germany’s initial testing criteria were no wider than Italy’s. People were tested if they had symptoms and had been to a risk area, or if they had contact with a confirmed case. But many initial cases had clear links to overseas travel.

The guidelines have since been expanded and testing has been boosted in recent weeks. The number tested jumped from 35,000 in the first week of March to 100,000 in the second, according to Germany’s medical association. The estimates don’t include tests conducted inside hospitals.

Epidemiologist Karl Lauterbach, a member of the German parliament, noted that the German outbreak started with large numbers of young people – “people who came back from holidays.”

The young have fared better with the coronavirus than the elderly. Italy’s initial outbreak struck at the heart of an aging population. Lauterbach said he expected Germany’s death rate to rise as more vulnerable segments of society are infected.

Because testing is not universal, and many people with the coronavirus might never be diagnosed, a true death rate is impossible to ascertain. But experts say the rate is likely to be significantly higher in countries such as Spain and Italy, where care is collapsing.

With more intensive care beds and ventilators than most other European nations and early measures to prevent the spread of the virus, Lauterbach said, he didn’t see Germany turning into Italy or Spain. Still, he has been advocating for wider restrictions.

“I think with all things considered, Germany will do reasonably well in this first round of a long fight,” he said.

The Washington Post’s Chris Mooney in Washington and Luisa Beck in Berlin contributed to this report. 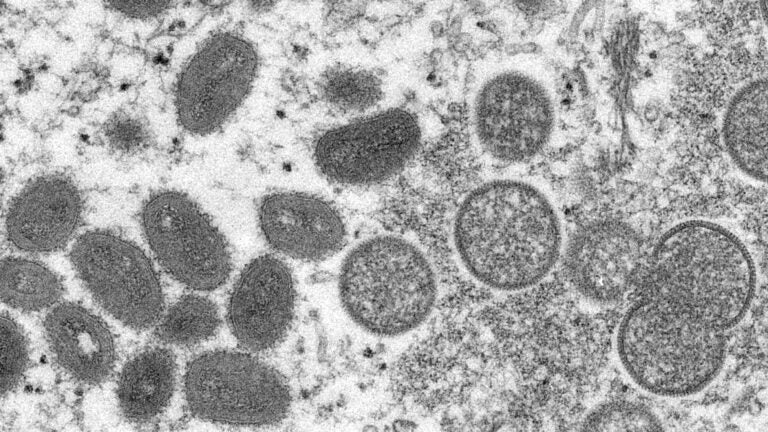