Dozens of people rallied on Cape Cod Sunday to demand state officials reopen the economy amid the COVID-19 pandemic.

“We need to follow the president’s and the task forces’ guidelines for opening the economy,” Keith Lambert, owner of New England For Trump, told Boston 25 News as he and others stood at the Bourne rotary. “It needs to happen fairly quick so that people can get back to working and supporting their families. And as you can see, with so many people out here, people are tired of being cooped up inside.”

The protesters gathered despite an order from Gov. Charlie Baker banning gatherings of over 10 people statewide through May 4.

Many at the rally held signs that read “Reopen our churches,” “Reopen America,” and “Reopen Cape Cod,” the news station reports. Also on display were flags and other merchandise supporting the re-election of President Donald Trump.

Dozens of people currently rallying at the Cape Cod rotary, not practicing social distancing, not wearing masks and calling for the economy to re-open. Many flags supporting President Trump. Some signs read “reopen Cape Cod,” and “reopen our churches.” @boston25 pic.twitter.com/DyiMjzxG5h

Officials and health experts in Massachusetts have advised residents to wear face coverings in public and to keep at least six feet away from others to limit the spread of the coronavirus.

As of Sunday, there were 632 cases of coronavirus in Barnstable County and 2,832 cases in neighboring Plymouth County. Statewide, 1,706 people have died from COVID-19-related complications since the outbreak began.

While Lambert opted to wear a face mask and gloves, others decided to forgo the protective measures and did not practice social distancing, according to Boston 25.

Lambert told the station he was a little bit concerned about others choosing not to follow the advisories.

“They probably should have kept their 6-[feet] apart, but I can’t control what people do and nor can you,” he said.

Barnstable County Commissioner Ronald Beaty posted on social media indicating he was at the rally in support of the effort.

“Generally speaking, government bureaucrats are blithering idiots!” Beaty wrote on Twitter in a series of tweets. “They would never survive in private industry. Do NOT listen to them regarding the Pandemic! Follow our Constitution!”

🇺🇸🇺🇸🇺🇸Along with about 150 other American Patriots today, Barnstable County Commissioner RON BEATY took part in the “Re-Open #CapeCod & Trump2020 Rally” at the Bourne Bridge Rotary! Much positive support was expressed by the public!🇺🇸🇺🇸🇺🇸 pic.twitter.com/HdC4Cj90EZ

Meanwhile, a poll conducted by Blue Cross Blue Shield and MassINC earlier this month found that the vast majority of state residents are supportive of the restrictions on business and public gatherings.

Sixty-four percent of respondents said the reaction to the coronavirus had been “about right,” and 28 percent said measures could go even further.

Six percent of respondents said the reaction to the virus had gone too far already.

Trump defended protesters with similar calls in rallies across the country on Sunday, The New York Times reports.

“These people love our country,” Trump said. “They want to go back to work.”

Last week, the president told governors that they can start reopening businesses by May 1 or earlier, but left the decision up to them.

“You’re going to call your own shots,” Trump told governors, according to the Times. “You’re going to be calling the shots. We’ll be standing right alongside of you, and we’re going to get our country open and get it working. People want to get working.” 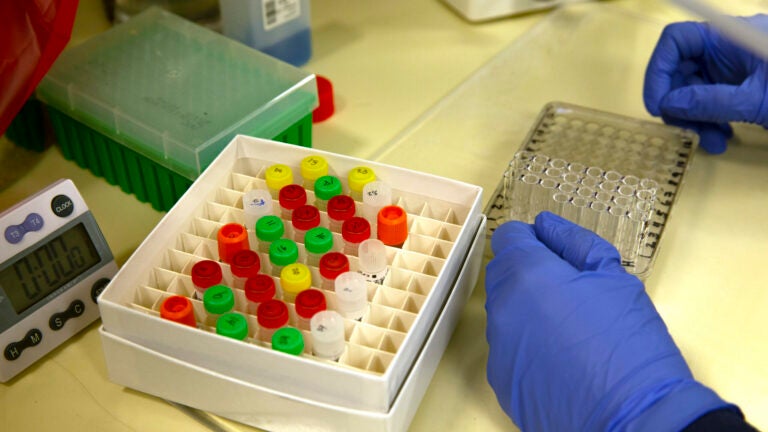