For all the attention to the science and politics of the coronavirus, another factor may be just as important in shaping life under the pandemic: the ways that people will change in response to it.

Changes in how we think, behave and relate to one another — some deliberate but many made unconsciously, some temporary but others potentially permanent — are already coming to define our new normal.

This crisis may have little precedent, but there are certain patterns in how people and communities behave when thrust into long periods of isolation and danger.

“It was the first winter that you realized that this is going to last, this is your life,” Velibor Bozovic recalls of the 1990s siege of Sarajevo, which brought life to a halt in that Bosnian city. “And somehow you live. Just like people are adapting to the situation now.”

During the nearly four-year siege, people’s sense of community, memory and even time all transformed, he said. Now, Bozovic and other survivors are already sensing echoes of that time in the slow-rolling pandemic, which is anticipated to last, barring a miracle, perhaps one to two years.

Research on the effects of epidemics and sieges, along with the emerging body of knowledge about the coronavirus, hint at what the coming months may look like.

Our ability to focus, to feel comfortable around others, even to think more than a few days into the future, may diminish — with lasting consequences. But we may also feel the tug of a survival instinct that can activate during periods of widespread peril: a desire to cope by looking out for one’s neighbors.

“We are incredibly capable to adapt to any kind of situation,” said Bozovic, now a professor of photography in Montreal. “No matter how bad it is, you adapt. You live your life as best you can.”

A world of half-closures and intermittent lockdowns

Until the virus is subdued either by a vaccine or by a global campaign of strategically coordinated lockdowns — which one Harvard University study estimated would take two years to work — daily life is likely to be defined by efforts to manage the pandemic.

There is no master formula. But suggestions from public health experts tend to follow a pattern.

Large gatherings may remain rare. A report led by Scott Gottlieb, a former U.S. Food and Drug Administration commissioner, said gatherings should be limited to 50 people or fewer.

This would preclude many weddings, sporting events or concerts. It would rule out a full return to commuting by public transit. Many malls, gyms, restaurants, bars and places of worship might remain fully or partly closed. So would many offices and factories.

Travel is likely to remain tightly restricted, particularly as societies that have controlled their outbreaks seek to keep new ones from breaking out.

There may be times and places where restrictions ease, either because cases have dropped off locally or in response to political or economic pressures. But as long as the virus persists somewhere in the world, the threat of new local outbreaks, and a return to lockdown, will remain.

With conflicting messages coming from government officials, much of the day-to-day burden of deciding which behaviors are worth the risk will fall on regular people. Even if officials authorize the reopening of shops, for example, neither employees nor customers will return if they consider it prohibitively unsafe.

As forces beyond our control, and perhaps even our understanding, dictate our day-to-day lives, the rules and norms may change rapidly.

“Loss of control of one’s routines, sense of normalcy, freedom, face-to-face connections and so on” defined much of peoples’ experiences during the severe acute respiratory syndrome epidemic in 2003, said Sim Kang, a psychologist at Singapore’s Institute of Mental Health.

Studies from the SARS, Ebola and swine flu outbreaks all recorded near-universal spikes in anxiety, depression and anger. But they also found behaviors focused on regaining a sense of autonomy and control increased as well: people reported working on their diet or hygiene, or reading more news.

“People, during times of prolonged, radical change, end up changing,” said Luka Lucic, a Pratt Institute psychologist who studies the effects of war.

His study of Sarajevo siege survivors, for example, found that many had a super-heightened sense of spatial awareness — a skill for evading bullets or bombs that they carried with them throughout life. And mask wearing remains widespread in societies hit by the SARS and Middle East respiratory syndrome epidemics, even for routine colds.

When the coronavirus outbreak is under control, aversion to strangers or large groups, and the threat of infection they could pose, might echo in our minds for years.

Bozovic, the Sarajevo survivor, recalled, as a metaphor for deeper changes, a street near his home that was often targeted by snipers. He avoided it during the war — and, to his surprise, well after.

“I don’t think I walked that street for months,” he said. “That lingers; that stays. And I’m sure it’s going to be the same now.”

While deeper shifts are difficult to predict, he added, one seemed obvious: “I think it will profoundly change how we interact physically with other people.”

The greatest psychological shift amid widespread crisis may be toward what is termed “prosocial behavior” — checking in on neighbors, caring for the needy, cooking for friends.

Early humans, trapped in a hostile environment, thrived when they cooperated, typically in groups of a few hundred.

Now, as we are once again besieged by nature and isolated into small communities, our survival instincts are re-emerging.

During the SARS epidemic, Sim said, people looked out for one another in ways they might not have done before. They are doing so again now, even in Singapore, a city known for capitalist striving and competition.

Those changes in thinking, he added, can reflect not just in-the-moment altruism but deeper emotional growth that can outlast a crisis.

Dipali Mukhopadhyay, a Columbia University political scientist who studies how societies cope during conflict, said, “All the different ways that people create solidarity in a crisis get activated.”

In Daraya, a long-besieged suburb of Damascus, Syria, Mukhopadhyay found networks of charity and mutual support stronger than in many peacetime societies.

Now, she said, she’s seeing similar behaviors forming in New York, where, as in other stricken cities, neighborhoods are reorganizing around local support groups as people instinctively shift toward thinking in terms of their immediate community.

In the first stages of an epidemic, Sim said, people feel torn between wanting to resist their new reality, or adapt to it. They may torment themselves trying to preserve normalcy, or counting down the days to its return — as many are now.

Liberation, survivors say, comes only through accepting what many would find unthinkable in calmer times: You, as an individual, have little control over the forces upending, and at time threatening, your life.

“That’s how people in Afghanistan live all the time,” Mukhopadhyay said. “It’s an assumption that you have no idea how things are going to be tomorrow. And something terrible probably happened yesterday.”

As a result, she said, “People live in the moment.”

Planning tends to be tentative and short-term. People cultivate moments of joy when danger recedes, knowing it might not last. Violence and disruption remain painful, but at least there is no expectation of normalcy or control to shatter. Pain runs deep, but so does resilience.

In the months of pandemic ahead, that may mean planning events like concerts or weddings only days or weeks out, as restrictions lift, knowing they could return at any moment. Travel, business opportunities, even relationships might grow more opportunistic and short-term.

“That to me is what it means to be resilient,” Mukhopadhyay said. “It’s to be adapting and accommodating, rather than resistant to, the suffering. I think that’s what it is to live through hardship for sustained periods of time.”

In past crises, researchers find, the deepest traumas surfaced only after they had ended.

“The thing we know from war and trauma is that the trauma is well contained whilst you’re doing the fighting, but the problems occur afterward,” said Stephen Blumenthal, a London-based psychologist.

Until then, it can come out other ways.

People may struggle to regulate their emotions, finding anger and panic come more easily. There could be upticks in insomnia and substance abuse.

In 2006, Bozovic suddenly developed symptoms of post-traumatic stress that had waited over a decade to emerge — a cautionary tale, he said.

“We’re all going to live with this somehow,” he said. “I don’t know how those anxieties will translate, but they will be there.”

This was a common prediction among survivors. We may surprise ourselves with how easily we return to many activities. But a year or more of fearing physical contact could alter something fundamental. 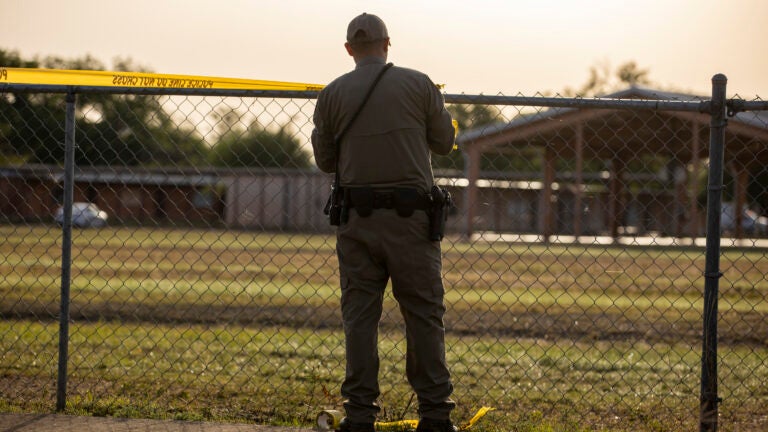 Uvalde had prepared for school shootings. It did not stop the rampage.