The Pentagon is planning a multi-city tour of the U.S. military’s top flight demonstration teams to “champion national unity” amid the coronavirus pandemic, according to defense officials and a memo obtained by The Washington Post.

The Blue Angels and the Thunderbirds, the demonstration squadrons for the Navy and Air Force, respectively, will fly over some cities together and others separately, according to the memo. The flyovers will occur in the next several weeks “to thank first responders, essential personnel, and military service members as we collectively battle the spread of COVID-19,” the disease caused by the novel coronavirus.

The mission – named Operation America Strong – was conceived by senior military officers in the Pentagon and is meant to be a nonpartisan show of resolve, a senior U.S. military official said Wednesday. He spoke on the condition of anonymity because the plan has not yet been announced.

“This is just a sincere thank-you,” the senior military official said. “It’s one way to acknowledge those who are pitching in.” 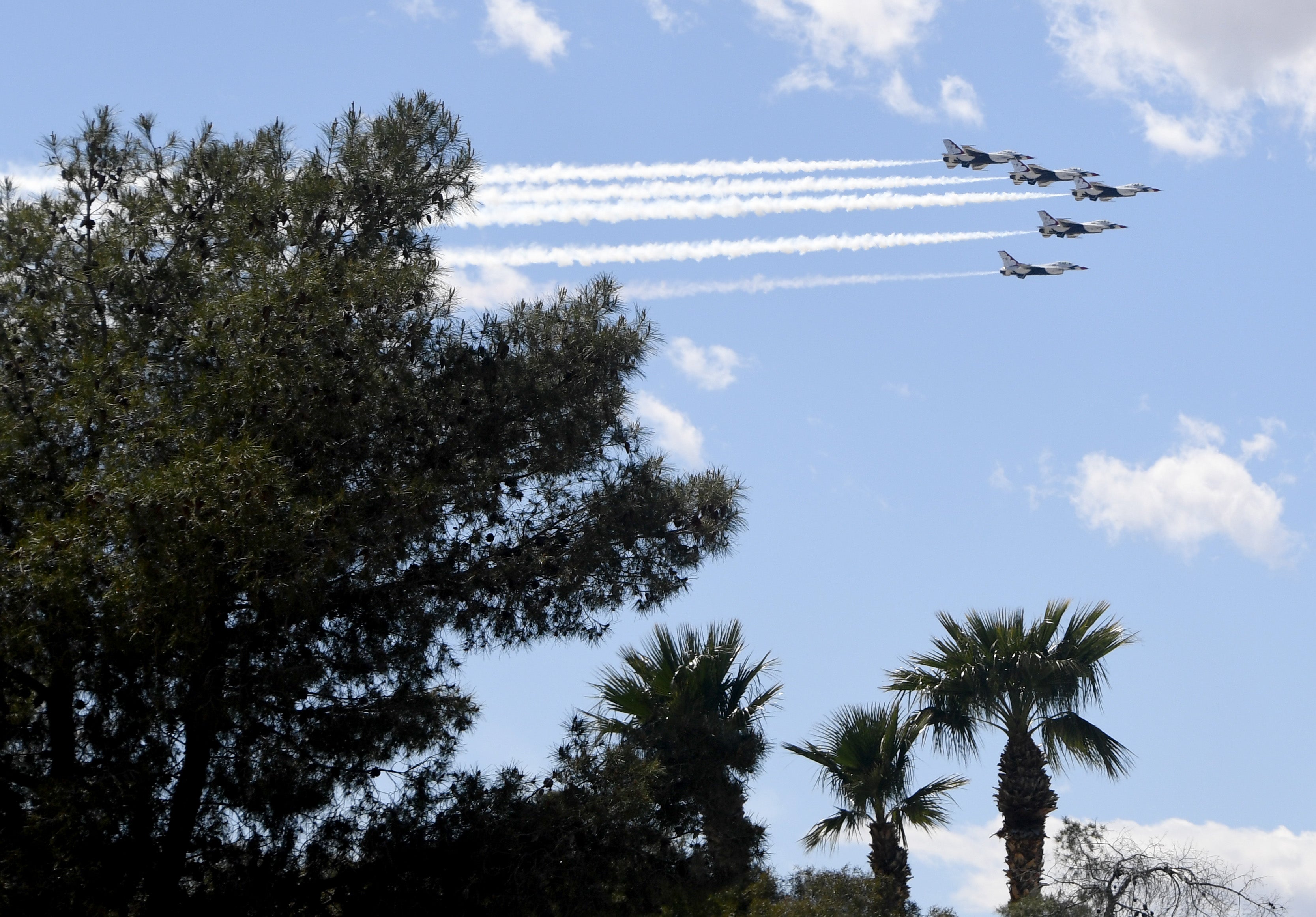 The U.S. Air Force Air Demonstration Squadron Thunderbirds perform a flyover in honor of front-line responders in the fight against the coronavirus on April 11, 2020 in Las Vegas, Nevada.

The official said White House officials have been briefed on the plan because of sensitivities about people gathering to watch amid the pandemic. The appearances will not feature air-show stunts, and the teams will avoid flying over areas where people can congregate, the senior official said, adding that the program still needs final approval from service secretaries.

It was not clear on Wednesday where President Donald Trump stood on the issue. He has frequently used military symbolism to convey American strength, sometimes in controversial ways. On Independence Day, he oversaw a “Salute to America” in Washington that drew some criticism for its use of tanks but that ultimately mostly highlighted American military history.

The use of the jets to show resolve could anger those frustrated with the administration’s struggles to find enough protective equipment for medical personnel. The squadrons each cost at least $60,000 per hour to fly.

The senior military official said that the cost of the flights will come from money already in the Pentagon budget. Other planes also could be involved, the official said, suggesting bombers flying over their home states as one possibility.

Congressional staffs were briefed about the plan this week, an effort in part to manage any political backlash, another defense official said, speaking on the condition of anonymity because of the sensitivity of the issue.

Sen. Rick Scott, R.-Fla., whose state is home to the Blue Angels, acknowledged Wednesday that he is aware of the plan.

“I’m thrilled to see our military honoring the front-line health-care workers who have been fighting every day against this silent killer,” he said. “They are all heroes deserving of our gratitude and honor.”

The memo said the Blue Angels and the Thunderbirds will fly jointly over Washington, Baltimore; New York; Newark and Trenton, New Jersey; Philadelphia; Atlanta; Dallas, Houston and Austin, Texas. It was not clear whether that list could change, but defense officials said it is not comprehensive.

The Blue Angels, with headquarters in Pensacola, Florida, will fly their distinctive blue-and-gold F/A-18 Hornets separately over at least 13 other cities, including Miami, Tampa, Tallahassee and Jacksonville, Florida; and Norfolk and Virginia Beach, Virginia. Other Blue Angels destinations include Detroit; Chicago; Indianapolis; Nashville, Tennessee;New Orleans; and Kingsville and Corpus Christi, Texas.

The Thunderbirds have carried out at least two flights that would appear to be a part of the plan.

On April 11, a formation of jets spent about 25 minutes flying over Las Vegas to thank first responders, the Air Force announced.

The squadron followed up a week later by flying over the Air Force Academy commencement ceremony in Colorado and several cities nearby on Saturday.

Speculation that the squadrons would fly together had grown since Monday, when the Thunderbirds were spotted flying into Pensacola, the home of the Blue Angels. On Tuesday, the two squadrons flew in formation together over Florida, according to the Pensacola News Journal.

The Washington Post’s Seung Min Kim contributed to this report.