As governors across the country continue to make moves and mull over options for easing social distancing restrictions amid the ongoing coronavirus pandemic, Harvard researchers released a report last week suggesting that in order to safely reopen, the country needs to be conducting at least 5 million COVID-19 tests a day by early June.

In order to fully re-mobilize the United States economy, the number will need to increase to 20 million tests per day by mid-summer, the researchers wrote.

The report — “Roadmap to Pandemic Resilience” — was released by a group of experts in economics, public health, technology, and ethics from across the country with support from The Rockefeller Foundation through the Edmond J. Safra Center for Ethics at Harvard.

The authors wrote that the COVID-19 pandemic requires the levels of public-private partnerships seen during World War II, calling for everyone to work together to “fight this terrible disease, protect human life, secure our institutions, and prevent the destruction of our economy.”

What needs to be done, they wrote, is much bigger than most people realize:

“We need to deliver 5 million tests per day to deliver a safe social reopening. This number will need to increase over time to 20 million a day to fully remobilize the economy. We acknowledge that even this number may not be high enough to protect public health. In that considerably less likely eventuality, we will need to scale-up testing much further. By the time we know if we need to do that, we should be in a better position to know how to do it. Achieving this will depend on testing innovation. If we rely on collective social distancing alone to tide us over until a vaccine is available, the economy will be shut down on and off for 12 to 18 months, costing trillions of dollars. We can instead fully restart the economy by August through a program of massive investment in public health infrastructure, especially diagnostic and serological testing, combined with effective contact tracing-and-warning programs, and supported individual quarantine and/or isolation.”

Danielle Allen, director of the Edmond J. Safra Center for Ethics, told Boston.com the question she and her colleagues sought to answer was how reopening the economy could be done in a way that made it possible for it to stay open.

“We think you want to reopen in ways that you have control over the disease so that you can avoid a second wave — that’s the key point,” the professor said in an interview. “And the most powerful tool other than collective stay-at-home orders for controlling the disease is a massively scaled up program of testing, contact tracing, and supported isolation.”

Allen acknowledged the goals for testing numbers are “ambitious,” but she said that scale of a program for testing, contact tracing, and supported isolation (TTSI) is the level needed to identify the number of people infected — and those who are not — in order to allow a phased reopening of the economy.

Following the roadmap, individuals who test negative would be able to go to work, while those who test positive for coronavirus would be isolated and their contacts traced — and also tested — to “choke off” transmission of the virus.

Over the last four days, coronavirus tests in the country have ranged between 191,265 and 255,900 a day, according to the COVID Tracking Project, with a total of 5.4 million conducted since January.

According Allen and her colleagues, the cost for the large-scale testing program they are proposing is projected to be about $15 billion a month, while the estimated cost of collective stay-at-home shutdowns falls between $100 and $350 billion a month.

The ramped-up testing, tracing, and isolation program would contribute to dropping the number of new cases “dramatically,” according to the researchers, until reliable treatments or vaccines are available for the virus.

Right now, collective stay-at-home orders reduce the spread of the virus because they reduce the number of interactions people are having, Allen said. The TTSI program she and her colleagues are proposing works similarly, but through catching people who are sick with the virus through testing and isolating them, rather than just having everyone at home.

She and her colleagues are suggesting through their program that the U.S. would see a steady deceleration of the spread of coronavirus without the worry of a second wave, as experts are now warning could happen if things reopen too quickly.

“Right now collective stay-at-home orders are decelerating the disease,” Allen said. “If we lift them, the disease will start to reproduce again because the vast majority of the population is still susceptible to the disease. We’re not even remotely close to having herd immunity. So that’s why in some models, the models that are about using repeated applications of social distancing to achieve disease control, what you see is peaks and valleys. So you have a peak like what we’ve just seen, you control it with collective stay-at-home orders, everything comes down, it takes a while for the virus to circulate and then it begins to start driving the numbers back up again, but you expect that when the numbers go up again, you have another application of stay-at-home orders … That’s a pattern we are trying to avoid.” 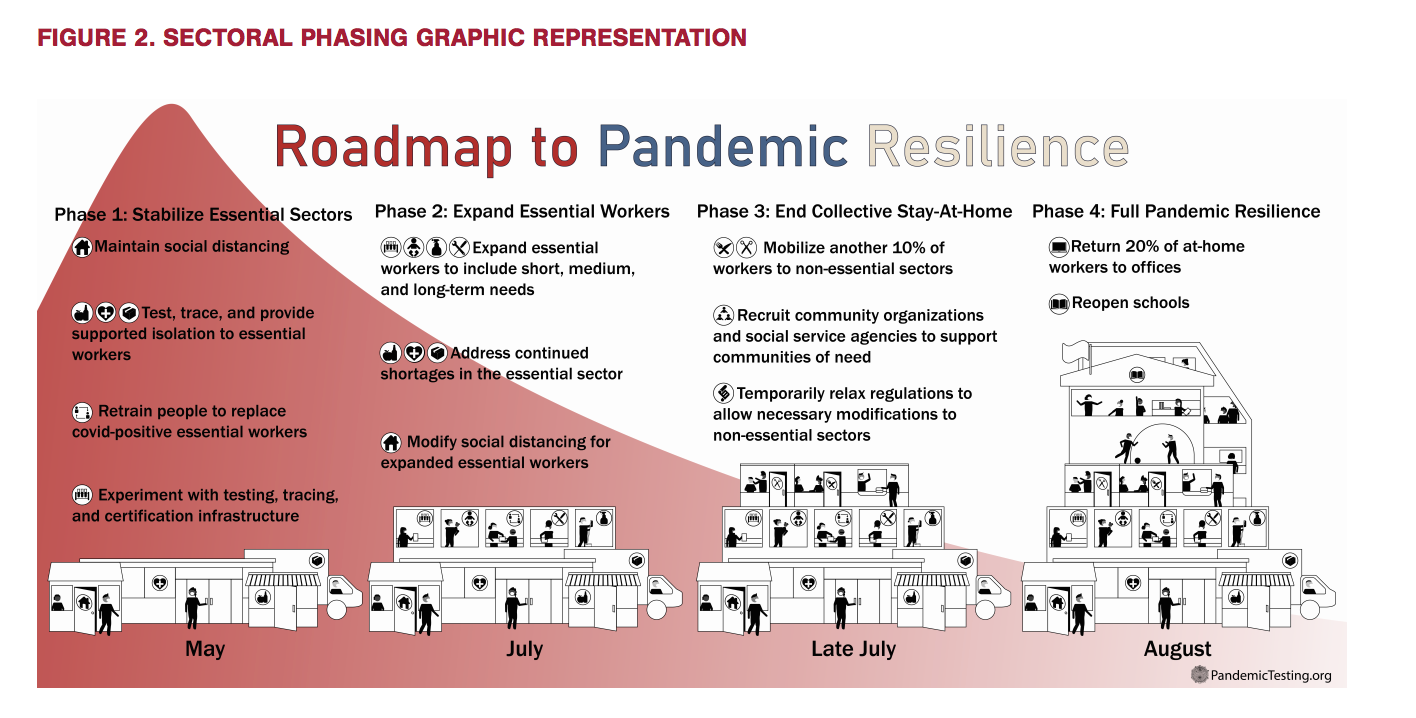 Right now, Allen said the greatest challenges to achieving the level of testing necessary are concerns within the testing supply chain that elements within the chain aren’t ready to ramp up.

“The CDC still has as its guidance that testing asymptomatic people is not a priority, so what that means is if you’re a producer of testing supplies, you have to presume that your market is only the therapeutic market, only for symptomatic people who show up at a doctor’s office or hospital,” Allen said. “That’s a subset of cases — it’s actually a minority of cases. So if you’re a testing producer, you think that your whole market is just that minority of cases, whereas actually, what we collectively need as a society is that even asymptomatic people be tested and people be tested outside of doctors’ offices as a much bigger market.”

But until the CDC changes its guidance, producers don’t have confidence to invest in building out their capacity for producing testing supplies, she said.

At the same time, officials responsible for the “last mile delivery” of testing — mayors and public health officials — don’t have the supplies so they haven’t built out capacity for the larger scale testing, which test producers then point to as evidence of there being no market in final delivery of supplies, Allen said.

Innovations could also help ramp up the testing process by inventing ways of simplifying it, the report suggests.

As an example, Allen pointed out if spit tests for coronavirus became widely used, it would require less use of personal protective equipment because the potentially infectious individual can just spit into a test tube — rather than being administered as a nasal swab from another — and a viral deactivator could be put into the sample, making it no longer a biohazard for transportation. The transportation of the deactivated samples could be layered over existing infrastructure for shipping to 30 new “mega labs” for processing — labs that would need to be built-out across the country, she said.

That’s where Allen and her colleagues are proposing the creation of a “Pandemic Testing Board” at the federal level, a group that would be charged by the White House or Congress with finalizing the supply chain for testing and activating regulatory changes where necessary.

Political feasibility of the roadmap is likely to be the greatest challenge to the plan since it requires coordination at the federal level, Allen said.

“At the end of the day, any path that really gets us to the level of coordination that we need does require the president,” she said.

The Harvard professor said she and her colleagues had a rough outline of the plan a few weeks ago, when they began circulating it internally with a task force from the National Governors Association, the White House coronavirus task force, members of Congress from both parties, and the national network of mayors.

“We have been working hard to help decision-makers see the value of testing, tracing and supported isolation,” she said. “And we have had positive uptake.”

Even with the hurdles and challenges, the Harvard professor said she believes it is “absolutely” possible for the tools laid out in the plan to be implemented.

“The stronger we make this tool of testing, tracing and supported isolation, the more control we will have over the disease and the more safely we will be able to reopen,” she said.

Watch a video explanation of the plan below: 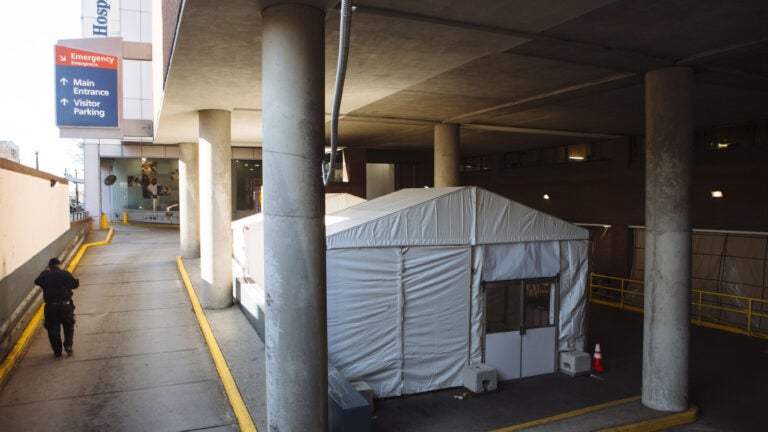